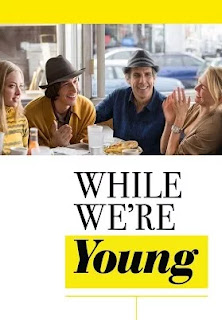 Noah Baumbach is a filmmaker I've come to like, mostly due to his work with Wes Anderson, however he's become a director whose films are gaining more and more notice, even if they are still niche indies. I enjoyed his debut "Kicking and Screaming," and 2005's "The Squid and the Whale" is almost universally praised, however I was not as fond of "Margot at the Wedding" and "Greenberg." I was waiting for him to make a film that moved him from the category of filmmakers I watched, to filmmakers I truly liked. His 2012 film "Frances Ha" was that film. It was as much a Greta Gerwig project as it was his own, but maybe having a writing partner balances him out. That's no insult to him. I love Wes Anderson, but even he's at his best when working with collaborators like Baumbach and Roman Coppola.

However, "While We're Young," his follow up, is a pleasant surprise that proves he's more than capable of delivering an entertaining comedy with deeper themes while working alone. In fact, it might just work better as pure entertainment than most of his other films. Part of that's due to the natural humor that goes along with the story of a midlife crisis. Middle aged people trying to relate to young hipsters will always be funny, even when it becomes me later in life. It also features some of the most ostensibly likable characters in his filmography.

All Baumbach films have deeper themes in mind, but rarely does he work them into a story that's this fun. Baumbach is also proving to have a knack for making movies about the kinds of people I know, or have known. Perhaps one day there will be a box set of his films with the subtitle, "The People You Knew in College." I was struck by how much I felt I knew people just like Greta Gerwig's character in "Frances Ha," here in particular Adam Driver's character feels like an amalgamation of multiple people I knew in college, at least in the first half of the film when he describes himself as "pathologically happy."

He plays Jamie, a 25 year old aspiring documentarian, who takes an interest in Josh (Ben Stiller) after attending his continuing education class about documentary filmmaking. Jamie's wife Darby (Amanda Seyfried) is a pleasant person, but mostly along for the ride having hitched her wagon to Jamie's high flying, free spirit.

While they're the source of a lot of fun for 40-something year olds Josh and his wife Cornelia (Naomi Watts), this is really Josh and Cornelia's film. It begins with them watching a friend's baby set quite appropriately to a twinkling music box rendition of David Bowie's "Golden Years." They struggle to remember nursery rhymes and lose absolute control of the situation once the baby starts crying. Thankfully the baby's parents aren't far. They talk about how magical and life altering having a child is, and encourage Josh and Cornelia to have a child as well. Humorously their excitement is met with blank stares.

Josh and Cornelia have tried to have a baby before several times, and each attempt has ended in miscarriage. Aside from them still not quite feeling ready to take on the responsibility of being parents, they don't want to put themselves through another failure. However, life is catching up with them. Josh's hair is graying, he has arthritis in his knees and neither one of them feels like they are living life to the fullest the way the did when they were younger. Rather than spontaneous vacations, they get stuck in routines that inevitably end in them doing their own separate things in the evenings.

That's a big part of what makes the introduction to such a young couple so enticing to them. All their friends have babies now, and worse yet, they act their age! Jamie and Darby are fun, they have an excitement about life that's completely absent from their own lives. Better yet, they challenge them to have new experiences they otherwise would never have tried. Perhaps the most interesting for them is that the younger couple is their complete opposite. They seem generous and fun loving where Josh and Cornelia are selfish and more concerned with work and structure.

In a montage we see Josh and Cornelia's addiction to modern technologies. Rather than spending time together, Josh hunts in vain for something to watch on Netflix, plays games on his tablet and Cornelia reads books on her e-reader. These shots are intercut with images of Jamie and Darby doing things we'd consider old fashioned, like reading paperback books, watching VHS tapes, listening to records and playing board games. One of the persistent themes is modern society's obsession with technology. Any time we have a question or think of something we think we need to know the answer to immediately, we reach for our phones. It's even accepted nowadays to pull our phones out in the company of others, when not terribly long ago it was considered rude. In contrast, Jamie and Darby try hard to remember something with their own memories rather than Googling the answer. That would be too easy. If they can't think of it, they just accept that they don't know, or perhaps it'll come to them eventually.

They take Josh and Cornelia to an Ayahuasca where they're meant to drink a liquid that makes them vomit out their demons. However, we noticeably don't see them vomit. In fact, they're about the only ones we don't see eject their demons. The more time they spend with Jamie and Darby, the more worried their friends become. They stop being invited to parties and hangouts, and yet that only encourages them to spend more time with their younger friends.

Jamie's zest for life and creativity, particularly in his documentary making, inspires Josh to reinvest himself in his own failing project that's been slowly fizzling out for the past 8 years. He and his editor work on it from time to time, but it's tough to cut together due to poorly shot interview segments and continuity errors due to Josh's ever changing appearance over the course of the 8 year shoot. Despite his reservations, he's learning from Jamie to be more open, so he goes to his father in law, whose a famous documentarian far more successful than Josh could hope to be. Although Josh doesn't get along with him, because he feels like he's living in his shadow.

Worse yet his admiration of Jamie turns to jealousy when he starts having success with his documentary. Jamie is able to gather investors and support staff of Josh's contacts who've long grown tired of trying to help Josh complete his overlong film. Eventually it's a question of whether he can live up to his father in law and Jamie's success.

It does come close to running off the rails toward the end as the fun spirit of the first half of the film gives way to a far more serious tone. Also, while it begins a story of both Josh and Cornelia, the second half devolves into Josh's singular storyline. The double edged sword here is that while it gains focus towards a goal, it leaves out one of the primary characters for a good portion of the film.

Nevertheless, the comedy of what happens when two married people have a midlife crisis at the same time is a strong enough start to the film to keep us invested throughout. There's also the deeper question of just what sort of ruthlessness it takes to get ahead in the world. Josh is a nice guy. Selfish, but likable. Yet the honest, nice guy sadly doesn't always get ahead in the world. That's another theme Baumbach takes on here. It's almost too many themes, yet they're satisfying elements of the film. They're worth examining on their own, even if some of them don't quite get a payoff here.

The performances are strong across the board. Adam Driver is particularly affective, and to a certain extent I believe that the first half of the film reflects what spending time with Driver in real like might be like (although perhaps that's just perception). Seyfried gives a fairly subtle performance, and Ben Stiller (who teamed with Baumbach on Greenberg) is as good as I've ever seen him. He is a rare talent that can pull off the indie drama, and broader comedies. Baumbach himself, is a director of somewhat minimal visual flair, despite his friend and frequent collaborator Wes Anderson's heavier, more particular visual style. In fact, he shares more in common with Woody Allen, both in his visuals and the types of characteristics he takes on. Baumbach might just be the best Allen-esque director working today, and considering how much I like Woody Allen, that's a very welcome thing.

I've always found movies that deal with midlife crises entertaining, they're usually funny and offer some unique insights. I suspect when I get older I'll value them even more. I should use my technology to set a reminder to watch this movie again in 10-15 years. Or maybe I should just try to remember it for myself.