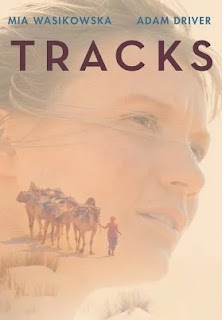 There are many people out there not content to live in any one place for any length of time. These nomadic people prefer lives of unstructured travel rather than the simplicity of a job and a home. Most of the time their journeys are meant for nothing more than experience itself. A life on the road does, however, grant useful life lessons that most of us may never learn.

There also happens to be a good number of stories, whether books or films (or films based on books in this case), devoted to sharing these nomadic journeys. "Into the Wild" and "Maidentrip" come to mind. These films share inspirational true stories of people craving new experiences. They're all fed up with being in one place and having to interact with people.

In this true story, Mia Wasikowska plays Robyn Davidson, the headstrong woman who takes on the ill-advised trip across 1700 miles of harsh Australian desert to the Indian Ocean, despite family and friends warning against it. She's sick of living in the city, and the overwhelming negativity of her generation. For her, being around people is an exasperating experience. While tales of her father's travels across Africa serve as inspiration for her, the fact that she'd be mostly alone is as appealing a thought as any.

Accompanying her on her journey are a handful of camels and her trusty dog Diggity, who is both her only true companion and a painful reminder of her childhood dog. A number of painful flashbacks pop up now and then to gives us her family background. They paint her as a young woman still grieving the loss of her mother. That loss also forced the unfortunate separation of her family, and thus the loss of her dog. There are some appropriately difficult scenes of animals in pain (considering the harsh conditions). These are treated with sensitivity, particularly a sensitivity to the truth of the events and the emotions they well up in Davidson, a self professed animal lover.

In order to get her trip underway she's forced to work for months on end to acquire her camels, but the work does grant her the necessary knowledge of dealing with camels. For funding she turns to National Geographic photographer, acquaintance Rick Smolan (Adam Driver) who connects her with the magazine. After putting a good word in for her, they become interested in her story, and agree to fund her journey on the condition that she allow Rick to meet up with her from time to time to take pictures. With no other choice she accepts, despite the fact that he's an infuriating break from her desired isolation.

With no ties, no duties, no one to place expectations on her, she finally feels free. It's the type of freedom we all crave on some level, yet fear to attain. And she's happy in her freedom until she can't get away from Rick, who continues to pop up more times than she willing agreed to. Rick is the exuberant, talkative kind of person that drives her crazy. He speaks quickly and doesn't seem to know when to stop. The closest the film comes to comedy is in the awkward moments where Rick tries in vain to make conversation with her, and we can tell she's getting fed up with him. Yet he's just one of many photographers and curious bystanders seeking her out as tales of her journey spreads.

If at first she hates Rick, he does become her sole source of human interaction later on, and the two form a somewhat intimate friendship. Sometimes it takes a lonesome journey of self discovery to realize that you are lonesome. Thankfully, she also receives help from friendly locals, one of whom (a town elder) willingly guides her through a stretch of land containing numerous sacred sites. He teaches her, and us, to respect the local culture. However, once they're through, she continues on her own. Even if the company was necessary for a short while, she's determined to finish her journey alone.

We come to care not only for her, but her company of animals. There is serious danger should her camels wander off, or should she get separated and lose her way. She claims there are three gifts that make life bearable: hope, jokes, and dogs, but the greatest of all is dogs. Her dog, Diggity, is essential to her as both a companion, and for her ability to find her way back to camp if and when they wander a little too far. This admission allows her flashbacks to her childhood dog to carry a deeper resonance.

Wasakowska and Driver, for their parts, actually do bare a passing resemblance to the people they portray. Wasikowska has always been capable of strong performances, but here she's given a chance to lead a film that has nothing else to do but look at her for around 100 minutes. She's great. We feel her desires, her hopes, her fears, her loneliness and desperation. For Wasikowska as an actress, the experience of portraying Davidson on such a journey was likely as transformative and cathartic as it is for us to see the film.

It's fairly minimalist in its styling, but does feature some strikingly beautiful cinematography set in a dry desolate landscape. It's about as straight laced an adaptation as there could have been. It rarely embellishes any sort of flair, and while that might mean it lacks for excitement, it does, I feel, work in its favor. We are always present with Robyn, everything is seen from her perspective, and such an inner journey manifesting itself as a physical trek demands that we sympathize with that journey. Curran allows us an intimacy with her, in close up shots and narrations (undoubtedly taken straight from her book) that grant insight to personal beliefs and feelings not shared with those she interacts with. For all it's quiet reflection, and meandering events, Curran does manage to leave us with a story that's well told and surprisingly affecting.

Of course, as usual, the destination isn't important so much as what you leave behind on the journey required to get there.

Posted by Zach Owens
Email ThisBlogThis!Share to TwitterShare to FacebookShare to Pinterest
Labels: 2014, 4, Australia, based on a true story, touching, travel