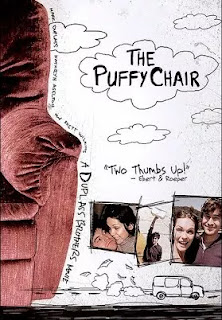 The Duplass brothers are a team I'd like to see more of. Sometimes their comedies can be crass, but just as often there is a satisfying authenticity to their characters.

"The Puffy Chair" was a 2005 film made in partnership with Netflix (it was distributed by Netflix), and it won the audience award at 2005's SXSW Film Festival. It may not have broad appeal, but it is certainly worth of the award it received. It's an indie of the "mumblecore" genre, and its scenes of naturalistic dialogue and improvisation give it that aforementioned authenticity.

There's something inherently enjoyable about road movies, I think, in part due to the physical journey that facilitates the emotional journey. Travel will always be appealing, perhaps more so for people who don't get to do it as much as they'd like. For Josh (Mark Duplass) the trip is meant to take him to visit his father for his birthday. Along the way he'll pick up a replica of a puffy chair they used to have when he was growing up that he found on Ebay.

However, after angering his girlfriend Emily (Kathryn Aselton) by taking a phone call during their last night together before he leaves, he decides to take her along in an attempt to make up for it. How these two have the sorts of jobs that allow them to pick up and leave with such short notice is never explained. Josh mentions that his band broke up and now he's shifting his focus to booking gigs for bands, although there's no evidence of success in this new endeavor. We get the sense that these people are either between things, or lacking the desire to work in the first place.

They stop to spend the night with Josh's brother Rhett (Rhett Wilkins) who invites himself to go along with them to meet their father for his birthday. He's an oddball character who we first see shooting video of a lizard on a leaf. He's in a state of awe as he just watches the creature sit there. However, his inclusion in their journey is met with disappointment from Emily, who was hoping to have a romantic vacation alone with Josh. It also makes it so that the only time they can have intimacy or serious conversation is at night, a time that for Josh is reserved for sleep, and never an appropriate time for serious conversations.

More so than your average Hollywood romantic comedy, the characters feel real (maybe less so in Rhett's case, who is the strange comic relief character here). The relationship at the core of this film is one that's barely holding together from the start. They seem happy at times, but most of the good times they spend together are masking their real issues. Josh tickles her until she laughs enough to forget that she was upset with him. If he can divert her attention away from these serious conversations he will.

While Josh does some unlikable things along the way, for the most part they're all likable characters, they're just more different then they are the same. The question is how hard are they willing to work and sacrifice for their relationship.

They are willing to say the words, "I love you," but more often than not they're fighting over how different they are. She's a hopeless romantic, always wishing Josh would sweep her off her feet. However, Josh doesn't seem to have a romantic bone in his body. He enjoys her company, and wants that to be enough. Worse yet, he's rarely in the mood to pretend otherwise. They're both stubborn in their selfish desires, yet being willing to do the things they don't necessarily want to do for one another (including accepting each other's differences) is beyond them.

A bittersweet scene later on, in which Rhett has a mock wedding with a girl he suddenly falls for plays out like the airing of grievances between Josh and Emily. Josh plays the part of pastor during the "ceremony," and the vows he has them repeat are a thinly veiled attempt to tell Emily how he feels. She finds Rhett and his new "wife" cute, and their impulsive love reflects what she wishes she had with Josh. However, Josh knows better. Rhett isn't the sort to take such an impulsive, fake wedding seriously. But the fact that Josh isn't willing to live in the moment and enjoy their friends likely temporary happiness is another sticking point for Emily.

She wants to talk about their future together, and he can't stand that she wants him to be someone he's not. While much of the film they're likable together, Josh does come off as the bad guy, yet later on an emotional outburst of pent up thoughts does reveal his true feelings on the matter in a way that balances the blame.

After arriving for his father's birthday, Josh sits down for a talk with him. He asks his father when he knew it was right to get married. The father (played by the Duplass brother's real life father) tells him the story, and gives him the sort of profound advice we rarely hear. We often feel like we're waiting for a sign, or waiting for something to happen to make things clear, but the truth is that we already know all we're ever likely to know. If it isn't clear by now, it's not going to be any more clear no matter how much longer we wait. We just have to make a decision and live with it in both the good times and the bad. Despite their differences, the performances do make us want them to stay together, but we'd understand if they're better off apart.

It has a light runtime at under an hour and half, yet it says all it needs to without over staying its welcome. It's a strong indie drama that shows the less pleasant side of relationships. It's perhaps a bit lighter on the comedic elements than you'd expect from the Duplass brothers, despite it being advertised as a "hilarious comedy," yet that works in the film's favor. There's a good chance you've dated someone, or know someone who has dated people just like these. As such, it's a relatable film.