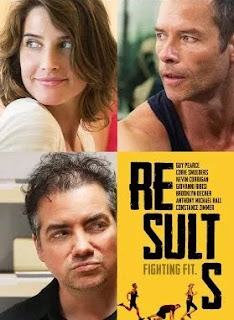 Bujalski is one of the founding members of the "mumblecore" genre, with his debut film "Funny Ha Ha" being the film that sparked the wave. As such, it's a little strange to see him moving out of the genre on to a bigger film with such recognizable stars, some of whom seem a bit miscast here. It's a romantic comedy, but it's low key nature, and lack of anything close to the standard formula keep it from feeling like one.

In fact, despite the genre listing of romantic comedy, this film isn't romantic or very funny. It isn't even clear until around halfway through the film who the romantic leads actually are. Later on there's mention of past intimacy between Trevor (Guy Pearce) and Kat (Cobie Smulders) but none of it is shown. They're co-workers at "Power 4 Life," the gym Trevor built from the ground up, and rarely do they feel like anything other than that.

Enter Danny (Kevin Corrigan), a wealthy man who recently split from his wife, and moved to the area. When he randomly shows up at "Power 4 Life" Kat takes it upon herself to work with him. About the only bits that pass for humor are given to him, as he's so out of shape that he has a hard time performing any of Kat's activities. His reasons for hiring a trainer in the first place are vague at best, he claims to want to be able to take a punch, yet that bit is never paid off, and he's taught to get in shape rather than to stand in a boxing ring. He also doesn't seem all that interested in getting in shape. He seems content to continue his poor diet, which includes large amounts of pizza, alcohol and weed, despite Kat's advice. To further the nonsensical elements surrounding Danny, it doesn't take long for all Kat's stretching in tight clothing to give him the desire to make a move on her, which she inexplicably reciprocates. For someone whose life and career is devoted to health and fitness, her rather sudden willingness to break her good habits in favor of Danny's bad habits seems out of place.

This development between Danny and Kat causes Trevor's previously covered, yet deep seated feelings for her to bubble to the surface. While these trainers seem to be smart, strong, motivated role models, that's just their job. It's abundantly clear from the first scene we see them in their off hours that they're anything but those things. Trevor aspires to be something of a zen master. He makes inspiring promo videos for the gym he created, and attempts to find inner peace about every move he makes in his business dealings. Shattering that peace is Kat, who he claims to have fallen for. Cobie Smulders plays her as an angrier version her character from "How I Met Your Mother." She's perhaps the exact opposite of Trevor. Bujalski tries to develop their relationship as one of balance. They play two extremes, each one attempting to pull the other their way, and inevitably meeting in the middle. It's the formula for what is perhaps the perfect business partnership, yet perhaps that would extend to the perfect loving relationship as well, if they didn't seem to drive each other crazy. There's repeated suggestion of intimacy between the two, including a fairly random scene where, completely out of the blue, she asks if he wants to make out, which he does not take her up on. Despite these few instances where it seems they may be into each other, every action they take suggests otherwise. The two separately share as much or more screen time with Danny than they do with each other. There just isn't much to grasp onto in terms of their relationship, which rather than being built up, feels begrudgingly accepted. It's hard to get a good feeling about a relationship involving two people who spend as little time together as the love interests do here, and what time they do have together is spent either fighting or generally feeling poorly matched.

It's hard to find any of these characters particularly believable, or all that likable. Danny is about as creepy as they come. His look, his slow manner of speaking, and generally creepy attitude (one that demonstrates a lack of boundaries, including that he thinks he can buy anything and everyone he wants) gives off the impression that he's as likely to murder these people as he is to befriend them. Yet Bujalski's script seems to be under the impression that, while he's a little strange, he's also a charming, attractive individual that people can't seem to get enough of. Yet Corrigan's portrayal couldn't be further from this ideal. Perhaps I'll just chalk it up to poor casting of Corrigan, whose performance also seems better suited to the role of a mobster or psychopath rather than a man women would throw themselves at. Yet Kat quickly does exactly that for reasons we can't imagine.

This is only an example of the bizarreness of the script that's filled with scenes that feel like they don't connect to what's been going on before, nor do they end up having any baring on what comes after. Consider Trevor's relationship with another woman for most of the film, that only ends when she stops appearing on screen. Or another instance in which Trevor mentions he has a daughter (that we never meet) that Kat seems angry she didn't know about. The information pops up out of nowhere, and ends up being of no consequence. It's also particularly strange that the entire film feels so out there and unusual, yet seems to come down to an all too neat ending that feels more typical "Hollywood" than we would expect from Bujalski, and the rest of the film preceding it.

I like the "mumblecore" subgenre Bujalski pioneered, but this is not it. I also like a good indie romantic comedy, this is not one. It's a strange film about strange people with unrecognizable motivations, doing things that don't make much sense. In fact, you'd be hard pressed to find any redeeming qualities here.