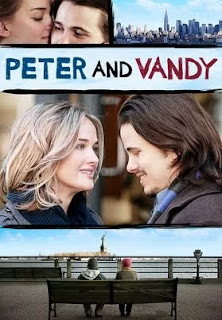 We've about seen it all when it comes to romantic comedies and relationship dramas. However, standouts of the genre tend to attempt something unique, like the indies that don't necessarily adhere to Hollywood structure. Films like "Eternal Sunshine of the Spotless Mind," and "500 Days of Summer" played around with nonlinear timelines that gave both an impression of what brought a couple together and tore them apart by analyzing both their earlier happy moments and their sad later moments often in back to back scenes.

The tagline, "A Love Story in Disorder," is fitting of both the romance and the structure of the film. Based on his 2002 stage play of the same name, "Peter and Vandy" similarly tries to shuffle the deck and lay its cards out in whatever order looks most attractive after they're dealt. It immediately drew comparisons, and rightly so, to "500 Days of Summer" due to their release in the same year. Yet there's something of "Cloud Atlas" to the editing and juxtaposition in that often scenes feel like they're literally handing themselves off to one another from past to present, in ways that inform each other.

Peter (Jason Ritter) first meets Vandy (Jess Weixler) after ordering food from the same street vendor and sitting in the same park. It's an awkward meeting, and yet they manage to leave lasting impressions on each other, perhaps less so for Vandy who isn't impressed by his odd stammering and apologizing for his obvious awkwardness. Yet when he meets her later in the same park he gives her a crossword puzzle in which her unusual name comes up. She finds him a breath of fresh air from the boyfriend she's currently dissatisfied with.

Yet soon enough we find similar traits to the ones she finds dislikable in her previous boyfriend. It's just one of many pieces of foreshadowing that this relationship is destined for tough times. Yet these bits of foreshadowing hardly feel necessary given that many of the happy moments spent together are intercut with scenes of arguing and malcontent from later on in the relationship. These moments, as they do, start small with bickering over the minutiae of everyday life together, like what's for dinner, and grow as time goes on. As these moments stack up their patience for each other runs thin.

Yet there are a handful of scenes here that are cleverly returned to and expanded upon in such a way that the nonlinear editing provides new context giving us a new found understanding of just when these scenes are playing out. While the why of these moments feels like what we're searching for, it's the when that becomes of supreme importance. Most of the time we feel like we know about when things are happening, the fact that DiPietro is able to fool us from time to time speaks to the skill of his writing and the thrill of this approach to editing.

In fact, in some ways I was reminded of Christopher Nolan's "Memento" that gave us a scene only to jump backward in time and play out the events preceding it. This approach led to chilling new context for the scenes we had just seen, often displaying different character's manipulative motivations. While "Peter and Vandy" doesn't work on the same intense level, it's not meant to. Yet the way it parses important details does feel similar.

While this clever editing is easily the film's greatest feature, it lacks a strong sense of character. Where the leads in "Eternal Sunshine of the Spotless Mind" and "500 Days of Summer" were unique characters that left a lasting impression, Peter and Vandy are mundane by comparison. They're well acted by Jason Ritter and Jess Weixler, yet there isn't much about them that stands out. At just under an hour and twenty minutes, this film is too long to be a short film, and almost not long enough to be a feature length film. If only the runtime had been padded with a bit more characterization. Yet the nature of the drama in the film is an exhausting one that could easily overstay its welcome if allowed to drag on much longer. Its a tough line to tow. Yet better establishing these characters as people before bringing them together may have helped build a stronger investment in the outcome of these events.

Worse yet, there's one egregious inconsistency that left me scratching my head. In particular, one scene stands out as the sore thumb of the film, in which Peter comes home from a stressful job interview only to berate Vandy on her method of preparing a peanut butter and jelly sandwich, that she is graciously making for him.  It ends with the two violently screaming at each other. While the purpose of the scene is well understood, the whole scene feels out of character, as it doesn't connect to the established characters in any of the scenes before or after it. There may not be much depth to these characters, but Peter is portrayed as a meek, mild mannered, overly apologetic creature. This fact does, from time to time, annoy Vandy, but she's otherwise a gentle loving person. Yet this scene would undo any appreciation for these characters that had been established, effectively villainizing Peter.

This scene stands as the crux of the drama that plays out throughout the rest of the film. However, their married friends, played by Tracie Thoms and Jesse L. Martin, tend to bicker even more than they do. To them they're a reflection of perhaps either where they themselves have been or where they could go if they're not careful.

It's not a perfect film by any means, but it is an honest one. Relationships can and do proceed this way over time. Working through insecurities and knowing that love and the pleasure of being together is more important than the small fights is the difficulty faced in every relationship. Whether you can accept each other's flaws and remain together is the question every couple is faced with at some point. Where "Eternal Sunshine" left things up in the air, and allowed the viewer to interpret what happened next, or perhaps what was best for them, DiPietro is much more clear on the future for these characters. It's how he gets there that makes this film worth watching.