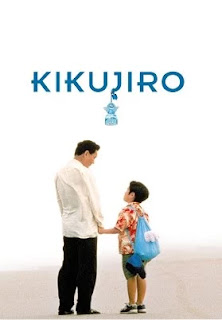 Takeshi Kitano (better known as Beat Takeshi) is a rare director/actor known for both Yakuza films and comedies (including his game show "Takeshi's Castle," better known in the US as the redubbed version "MXC"). Here he presents a family friendly journey to reconnect a young boy with his birth mother who lives far away.

School is just letting out for the summer, and the boy, Masao's (Yusuke Sekiguchi) only real friend is leaving for the summer on vacation with his family. Masao lives with his grandma, who leaves food for him every morning before heading off for work, but it's our understanding that he's left alone for much of the day.

When he stumbles upon a photo of his mother, and a note stating she is living in Toyohashi (west of Tokyo), he gets it in his mind to go see her. He leaves the house in a hurry to tell his grandma about the photo, but along the way a group of bullies stop him to steal his money. Thankfully, Kikujiro and his wife spot the trouble and force the bullies to return his money. After some time spent with him, the wife assigns Kikujiro to take Masao to Toyohashi to see his mother. 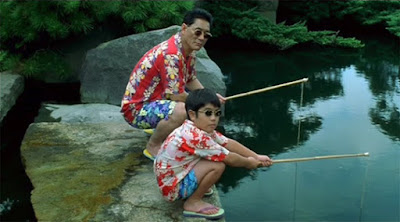 However, Kikujiro has a bit of a gambling problem so instead of using the money to travel, he takes the money they were given (as well as Masao's money) and gambles it away at a race track. This only means their trip will be much slower and rely on the kindness of strangers. From there the movie becomes a road picture as the two stop at a hotel they can't pay for, and sit at a bus stop for a lengthy period of time waiting for a kind stranger to pass by and pick them up.

The turning point of the film, and for Kikujiro is when Masao's journey prompts a similar search for his own mother. He identifies with Masao's pain all too well. Masao and Kikujiro make friends along the way with a number of colorful characters, all of whom are similarly loners on the outskirts of society. Several of them join in with Kikujiro in an attempt to brighten Masao's summer with a memorable, fun filled, beach vacation. The journey for both he and Kikujiro allows them to form a friendship that brings them out of their painful isolation.

Much of Kitano's humor comes in the form of playing against his own gangster persona, instead playing the part of an incompetent but earnest tough guy. Despite his attempts to act like a gangster, his heart is in the right place when it comes to taking care of Masao. His trouble is he doesn't know how to show it. Occasionally he'll say the right thing, but mostly he acts out in order to get his point across. He's perhaps even more childlike than Masao. 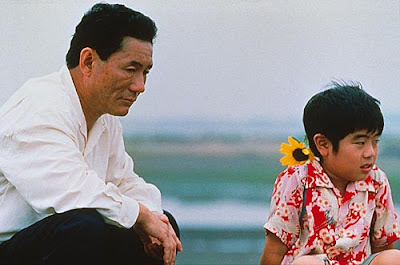 There's a hint of the beach scene in "Sonatine" to the goings on at the beach here as well, where adults pass the time acting like children for the boy's amusement (and ours). And the games they play, perhaps, have their origins in some of the games played on Kitano's game show "Takeshi's Castle" (particularly the red light, green light game). New scenes are introduced in picture frames with colorful titles as if Masao has been documenting the summer's journey. It's very simplistic filmmaking that at times seems almost amateurish, while at others feels like the working of a seasoned director. The acting, at times, is over the top, particularly that of Kitano, who hams it up for the kids of the audience, but just as often he's actually quite funny.

I very much enjoy Kitano's style, even if, admittedly, it wouldn't work here in America. He's a director of very minimalist style, not afraid of letting scenes meander and play out slowly until the sum of their parts adds up to something we can appreciate. For instance, while at the bus stop, there are a number of moments that play for slapstick humor, but he spends far more time there than most directors would dare to.

By all rights the character's journey is over earlier than expected. Yet the ensuing beach scenes play out as bonus padding that feels essential to healing these broken protagonists. It features a beautiful, relaxing score by long time Hayao Miyazaki collaborator Joe Hisaishi, as well as some generally beautiful cinematography. Their journey through more rural parts of Japan are places not often shown in cinema. It may not be to everyone's taste, but "Kikujiro" is a touching, humorous film, and it's one of Kitano's best.