Initial Thoughts on Google Cardboard and the Coming VR Revolution 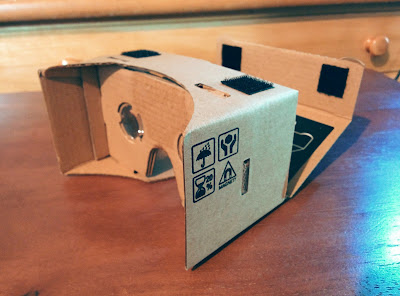 At first everyone laughs. It's a small cardboard box, you put your phone in, then hold up to your eyes and look around. It does seem a little strange at first. But every time I hand it to someone to try for themselves, their first word is always, "whooooa!" And they get it. It's the future, and it's not far away.

While Google's side project currently feels more parlor trick than essential piece of home entertainment, later this year YouTube will be able to display 360 degree video for virtual reality viewers. And the bigger players in the VR business (HTC Vive, Sony Morpheus, Oculus Rift, Microsoft HoloLens, Samsung Gear VR to name a few) are producing high end headsets for gaming and 3D stereoscopic video consumption. All of this may take a while to catch on, and the technology will likely need to mature (in order to lessen motion sickness), but the first wave is coming later this year. That doesn't necessarily mean we're on the verge of a new virtual way of living akin to Ready Player One's Oasis, but as another means of storytelling and escapism, the possibilities are too exciting to ignore. 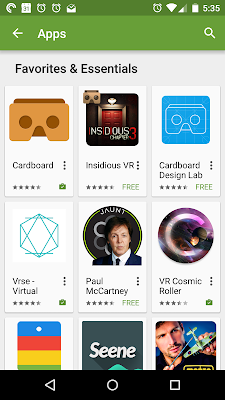 The significance of Google's cardboard initiative is the price, affordable VR for the masses. When the high end models hit the market later on this year they'll be starting around $200 (and going up significantly from there), the unit I bought was around $15, and it's available now. Granted, such an affordable version lacked the ability to adjust focal length, but for the price that's forgivable.

I tested the model, "I am Cardboard" and while the lenses required some cleaning (and could use a bit more still) from lint and small bits of cardboard causing a grainy look, it's easy enough to clean out. The lack of adjustable focal length does make it so I have a hard time focusing now and then (which leads to headaches after a while), but again for $15 I wasn't expecting anything fancy (there are higher quality models available as well). Otherwise the cardboard feels sturdy enough even if Google admits cardboard viewers are not meant for long term use, but then again they're very affordable. I should also mention the fact that the included instructions for folding the viewer into shape are utterly useless. I had to look up a video on YouTube to help make sense out of it, but the new model Google previewed at i/o should be much easier as the steps to assemble the device have dropped from 11 to 3. The app selection to use with cardboard is a very mixed bag at the moment, but many of the apps and videos (most of which are free I might add) make it well worth the price of admission. 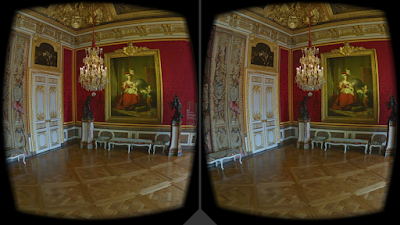 Aside from watching 3D and/or 360 degree videos and pictures, the most practical use might just be in the classroom. At Google i/o this year, Google showed their new classroom experience they're calling "Expeditions," where all students (and the teacher) can have synchronized virtual fieldtrips, taking kids to places they could otherwise never go. After seeing this, I was immediately sad that I was forced to look at text books and videos on tube TVs at schools I attended. Nevertheless, these low cost VR headsets are a great solution for schools. As such, one of the best demos available in the cardboard app is a virtual tour of the Palace of Versailles, in which a guide gives a tour of a few of the rooms therein. It's convincing proof of the practicality of VR for schools.

For photographers and YouTubers, currently you can take 360 degree "Photospheres" with the Google Camera app on your Android smartphone and share/view them on Google+ (there are even a few communities in which people around the world share them (like this one), but viewing them in the cardboard viewer makes you feel like you're there. YouTube currently has some 360 degree videos you can view (and click and drag around) like this one, but this summer they're set to release "Jump" which will be a means of sharing stereoscopic VR video on YouTube for viewing with cardboard and other headsets. Certainly the expense of the rigs required to shoot such videos (not to mention the tech behind stitching it all together) is likely too expensive for the common YouTuber. As such, I hesitate to say it's the next big thing in any social network's arsenal, but I am interested to see what can and will be done with it. 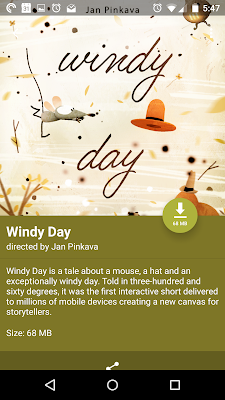 Inevitably this leads me to wonder what filmmakers will do with the platform, and the future of home video. How long will it take for brave, tech enthusiast filmmakers (of which there are many) to bring Omnimax like experiences to our mobile phones? Focus Features has released an "Insidious VR" app to accompany "Insidious Chapter 3" (just released in theaters), and Adult Swim has a trippy VR app they're calling "Brainload," and Google themselves have an animation in their Spotlight Stories app (formerly Motorola Spotlight Stories) by Pixar's Jan Pinkava (who has worked on films such as "Ratatouille" and "Toy Story 2").

And these are just the beginning. They're examples of what's to come, and I can't wait to see where filmmakers go with the technology. YouTube Jump is sure to make for unique experiences as well. VR will be a revolution for home entertainment not limited to gaming. We will be able to experience movies and documentaries in ways never before possible. That's something to get excited about.
Posted by Zach Owens
Email ThisBlogThis!Share to TwitterShare to FacebookShare to Pinterest