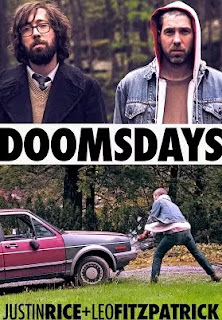 Why can't a person just break into a vacation house and live there sampling the owners food without them coming back home anymore? As humorously ridiculous as that sounds, that's where "Doomsdays" begins. Friends Fred (Justin Rice) and Bruho (Leo Fitzpatrick) wander from house to house taking what they can get. They're free spirited, and yet somewhat frustrated souls. They usually let out their frustrations by damaging the houses they don't own, or by playing a game involving punching each other in the shoulder.

They happen across a small town or two, and a couple of parties being thrown at these isolated getaways, where Fred can practice his charms on whichever lady he happens to see first. Bruho, on the other hand, is completely disinterested in being intimate with anyone, and prefers to take his aggression out on whichever cars happen to be nearby. He has an aversion to motor vehicles, which leads to slashing tires, and breaking windows. At first we wonder whether this lifestyle is some sort of class war, or deep seated angst against those rich enough to have vacation homes, yet the impetus lies elsewhere.

The days of March pass in title screens leading to the next set of adventures. But what really opens their odd world to us viewers trying to catch on is when a lonely teenager, Jaidon (Brian Charles Johnson) starts following them, asking to join their "operation." A hilarious montage of explanations walks us through their methods. They have various ways of getting into the houses, and security doesn't usually tend to be an issue. Surprisingly its the houses with security signs that have no working security, the ones without are the ones to worry about. Police response times are poor considering how remote many of the houses are, so they aren't scared of being caught either. However, if and when inevitably the owners return to find them in their home, the fast talking, fast thinking Fred is usually capable of spinning a quick witted, charismatic story that puts them at ease. He explains that anyone would rather think it were a simple mistake than allow themselves to fear the other, more realistic scenario. Not to mention a little charm goes a long ways. However, failing that, Bruho is ready with a sucker punch, giving them a moment to make a run for it.

Upon entering a new house they make a quick sweep looking for anything of value. Fred makes a beeline to the alcohol cabinet, and the others look for food and money. Most of the time they'll stay until it feels unsafe to remain, or impulse tells them to move on, or in the worst case scenario, a returning owner forces a quick getaway.

These are the guys most ready to go should an apocalypse occur. In fact appropriate to the title, there's something that feels almost post apocalyptic about the world they inhabit already. We know it isn't, yet there's a solitude and emptiness about it all. Bruho explains that their philosophy on life is that it's all pretty much over already, or will be soon. They believe that because the world is running out of peak oils, which are used in the making of everything, that soon everyone will start dying off. Knowing his feelings on oils, and our dependence on them lends cause to his hatred of vehicles. Nevertheless, this coming apocalypse will lead to everyone living the way they do, as nomads scouring the planet for food, drink and safe lodging. Fred's personal justification is a humorously simple analogy: if you were on the Titanic and you knew there weren't enough lifeboats for you, why not live it up at the bar?

The next bar available is at a party they happen upon not long after taking in Jaidon. While at the party Fred uses his charms to woo Reyna (Laura Campbell), a young 20-something about as aimless as they are. Her admittance into the group is the catalyst for the breakdown of their "system" of living as emotions begin running high.

It's got a particular sense of humor, and it's otherwise such a meandering slice of life film that many will be turned off by its lack of structure. Yet that's perfectly fitting of characters who have no fixed destination in mind. There's absolute freedom to their escapades. In one of Jaidon's earlier scenes, he's adjusting to the idea of this freedom. The realization that he can do anything he wants prompts him to smash a lamp and a few other household items just to feel how liberating their life of no rules is. It's how we might have enjoyed our time, were we so young and so free. Despite their lack of structure, their freewheeling lifestyle is captivating to watch. The concept behind the film is an interesting one to start with, yet very nearly takes precedence over the characters themselves. However the characterizations, particularly that of the ring leaders Fred and Bruho are cleverly conceived and well performed by Justin Rice and Leo Fitzpatrick respectively. In the same way we'd be drawn to such free-spirited vagabonds given the circumstances, the film draws us in because wondering where they'll go and what they'll do next is as interesting for us as it is for them.

There's also some attractive cinematography given that the film is set in New York's beautiful Catskill Mountains. The musical accompaniment is so minimalist, it often disappears for long periods of time. What music there is, is often plucky acoustic guitar rifts by none other than first time writer/director Eddie Mullins himself. It's an at times vulgar, alcohol fueled life that he presents in his humorous debut, yet the subtle craftsmanship and originality on display has me excited to see what he'll do next.