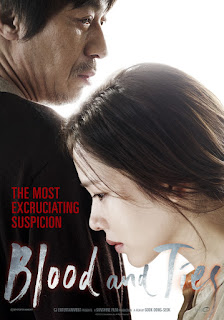 Da-eun (Ye-jin Son) lives with her single father Soon-man (Kap-soo Kim). But when Da-eun sees a film about a kidnapping/murder case, the credit sequence plays a portion of a phone call from the real killer, whose voice sounds all too familiar. Her sudden suspicion grows and sets her on a path to discover whether there's any connection or not. That's the setup for Dong-Suk Kuk's debut film "Blood and Ties."

The immediate comparison that comes to mind is Alfred Hitchcock's 1941 film "Suspicion," in which Joan Fontaine marries the ever charming Cary Grant, yet soon after, his peculiar behavior and strange events surrounding him begin to make her suspect that he's planning to murder her. Rather than making Da-eun scared for her own life, she's left questioning her father's past. Both films present a happy family with a male character who seems at first too good to be true, but secrets don't stay hidden for long. We just have to determine what they really mean. 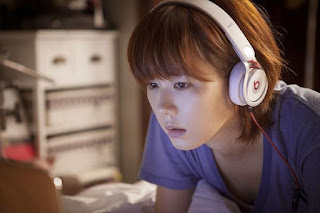 The other way they're similar is in the way they play on our sympathies. Much like the damsels in distress here, we just can't imagine that the person they've known for so long would do something like this. The case in question is the Han Chae-jin abduction case, in which a young child was kidnapped for ransom money before being brutally murdered. The case has recently been brought back to the limelight due to the soon to be expired statute of limitations, and a recent film on the subject. Da-eun, an aspiring reporter, goes to the film with her friends, one of whom is studying to become a police officer (whose inside connections become valuable later on), and they're all immediately struck by how similar the killer's voice sounds to that of her father. But what really makes her scared is the killer's creepy cackle of laughter and his inclusion of the phrase, "it's not over till it's over." Both of which are unmistakable characteristics of Soon-man.

The film is structured in fairly typical fashion, an opening scene that sets things up all too neatly, and a closing scene that ties all the loose threads together in a nice, neat package. It begins with Da-eun as a child to establish Soon-man as a loving, devoted father, and Da-eun as a daughter who holds her father in extremely high esteem. Of course, the scene inevitably contains important bits of information we'll need to remember later. While it isn't very imaginative in its structure, it does manage to stay thrilling, particularly in the second half where a beat the clock scenario, due to the countdown on the statute of limitations, ratchets up the tension. 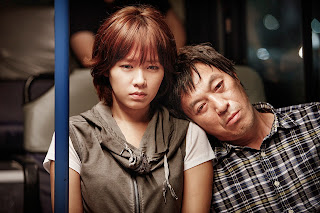 Dong-Suk Kuk does a good job of presenting things entirely from Da-eun's perspective, which allows us feel her suspicion and doubt. Ye-jin Son ("The Pirates") gives an excellent performance as Da-eun, who stretches to the breaking point in her investigation of her father and the details of the case in question. And while Kap-su Kim is no Cary Grant, he does manage to make Soon-man a likable father figure who would do anything for his daughter. Yet that's where Dong-suk Kuk's script allows for suspicion. However, there's far more to this family drama than simply her fear of his past.

As is fairly commonplace in Korean dramas such as this, there's a lot going on. Almost too much. It's a near overly complicated plot, with details that seem to get lost in the shuffle. Furthermore certain elements make us question the logic behind different aspects of the story. For instance, Da-eun seems to have extremely good memory of a day from her childhood that seems like a fairly ordinary day of little consequence to her. I doubt I'd remember such intimate details so clearly. And that's only a minor gripe, the others I can't get into without spoiling things. While Dong-Suk Kuk does a pretty good job of providing explanation for most things, there's still a few that require your suspension of disbelief.

Nevertheless, the details of this family are what makes the story interesting. Much like "Suspicion," "Blood and Ties" presents a powerful character study, while making us question whether someone is capable of doing the unthinkable, and what would motivate a person to commit such crimes. It's a solid debut effort, even if it lacks that "Hitchcockian" touch.