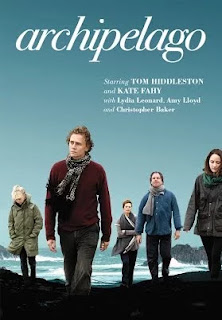 Before he became famous as Thor's villainous brother Loki in Marvel's Avenger's films, Tom Hiddleston played Edward, a lost soul who recently quit his job to volunteer in Africa. Before he goes, his mother and sister meet him for a vacation on the island of Tresco (part of the isles of Sicily) for a relaxing send off. However, family vacations are tougher the older we get. Rarely is there are more beautiful location for filming, and a family so ill suited to be around one another.

Edward's sister Cynthia (Lydia Leonard) doesn't approve of his cavalier decision, and speaks her mind of the matter often. He expresses his desire to help educate the younger generations of Africa about safe sex in order to help slow the spread of aids there. However, his family knows him best, and they aren't convinced of his passion. When they continue to press him on this big decision, he begins to show cracks in the armor. There's a sense that he isn't completely sold on the idea himself.

Because it's a family only vacation Edward's mother and sister forbid his girlfriend Chloe from coming along, yet they themselves have brought along a maid named Rose (Amy Lloyd) to do all the cooking and cleaning. And the mother, Patricia (Kate Fahy) had hired a local artist, Christopher (Christopher Baker), to teach her to paint all the beautiful landscapes on this scenic archipelago.

In addition to being a teacher of art, Christopher becomes something of a surrogate father. He offers advice to Edward when he starts to question his own decision making, "It's not really what you do, it's the intensity by which you do it. By the conviction of the reality you believe in, you'll make others believe it. And then people get convinced, and even oneself gets convinced. You just have to step into it, whatever it is." The problem is Edward hasn't got the conviction to stick to his plan, nor does he believe in it enough to convince those around him. It'd be 11 months away from his family, his girlfriend, and the world he knows. While in some ways he tries to convince himself that it's right, he can't be sure. Yet to a certain extent, for all of us, that uncertainty is life. This vacation, for him, is a chance for reflection. A last ditch effort to convince himself that what he's doing is right. His attempts are met with unending skepticism from his own family members.

In the meantime, he begins to bond with the cook Rose. He feels bad for her doing all the cooking and cleaning alone, and offers to help or at least do as much for himself as he can. His warmest interactions throughout this island stay tend to be spent with her rather than his family. They notice his attraction to Rose, and mock him for having too much empathy, which extends to his desire to volunteer in Africa.

His sister Cynthia, on the other hand, begins to micromanage their outings, obsessing over the seating arrangements at restaurants, and complains about the condition of the food once it comes to them. While the others try to remain good sports about it at first, Edward's extends his empathy to the workers of the restaurant. Every family has that one member who is completely unafraid to complain in restaurants, while everyone else sits in awkward silence. Edward and Cynthia couldn't have more opposite personalities. She's blunt and controlling; he's empathetic. As such, their clashing viewpoints lead to more than a few disagreements, yet what seems to bother them most is what the other thinks of them. The way families do, even if we don't agree with each other, we tend to look to each other for validation. Neither of them seem likely to find it in one another.

They're all lost souls, and at certain points it becomes quite clear they don't even know how to be around one another. There's a few scenes where they all sit around awkwardly, no one knowing what to say. They sit in silence, and Hogg allows the moment to draw out far longer than we are comfortable with. Other scenes where they do speak often end in anger, with one person storming out.

Ed Rutherford's beautifully picturesque cinematography is done in simple setups. He keeps his subjects at a distance. Few are the intimate moments. We're not offered close ups, and rarely is just one of them onscreen at a time. Even if Edward is the one we identify with most, it hardly feels like it's just his film. Furthermore, Rutherford doesn't move the camera, opting to leave it in place. Director Joanna Hogg then allows scenes to play out in long takes. It's a refreshing example of the beauty of simplicity.

It's as slow moving as a home video of your own family vacation would be if you just set up a camera to roll as the family goes about trying to reconnect and enjoy their meandering experience. At one point, when asked what the plan for the day is, Edward responds, "I'll wait until I'm told what to do." Their vacation is a getaway without any particular plans in mind.

The trailer for the film offers the definition of archipelago, "a group of scattered islands in a large body of water." I can think of no better way to define this group of people. While there's plenty of conflict here, resolution doesn't come about the way it does in your typical Hollywood film, because families don't work that way. The main contrast here is familial discontent set in a beautiful vacation home. Yet the overarching theme we come to understand is that family is family. No matter how messed up things are, you're stuck with each other. It's a more naturalistic film that values subtle interactions rather than prefabricated moments.

I often enjoy slice of life films. They're not films likely to gain wide appeal due to their lack of convention, yet I value films that portray life as it is. Archipelago is such a film.