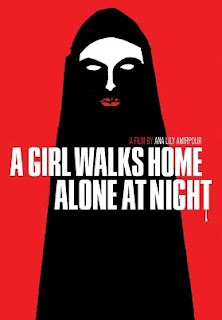 
Just when you thought that the Vampire genre of films had reached a point of over saturation, we get three of the best examples of the genre. "What We Do In The Shadows" was Taika Waititi's wonderfully hilarious mockumentary on the subject, while Jim Jarmusch gave us a more contemplative drama about weary Vampires who've lived to see it all and can't take much more of it in "Only Lovers Left Alive."

"A Girl Walks Home Alone At Night" shares more in common with Jarmusach's film, even seeming to borrow from Jarmusch's slower more mindful pace, and sensibilities of mood and tone. Yet there's a love of classic cinema evident within the film as well. Arash (Arash Marandi), one of the main characters, shares the look of James Dean in "Rebel Without A Cause," despite not sharing much in common with the character. In fact, the whole film, while seemingly set in modern times (although the setting isn't clearly defined nor essential to the film) has the appearance of a film set in the 50's. From the black and white cinematography to the 50's era car, to the clothing, the setting could have been narrowed down if it weren't for the presence of modern technology. So we'll have to chalk it up to Amirpour's love of retro things, which also manifests itself in the form of stylistic cues from 60's French New Wave, as well as Sergio Leone's spaghetti westerns.

It's set in the small, fictional, Iranian, ghost town Bad City, where the people and goings on match the cities name (which might just be the only thing in the film that's too on the nose). The main character known only as "the girl" (Sheila Vand) is a lonesome vampire trying to clean up the city. In a way, it's a blending of the modern fascination with super heroes with a vampire taking the role of the vigilante super powered, caped crusader who ventures out at night to put evil doers in their place. As such, it's not surprising that the film is based on a graphic novel of the same name written by none other than Amirpour herself.

The girl walks the streets at night weighing random passersby's deeds against her moral compass, which isn't clearly defined, nor meant to be. She seems to innately know whether a person is a bad sort or not, usually depending on their treatment of women. She hunts a pimp, and a man who mistreats a prostitute who she's come to befriend. There's hints that she can see through the eyes of animals (in this case a cat), but that's a super power that's also not clearly defined. However, when she meets Arash, a good-hearted young man, her intense loneliness overcomes her with desire to grow close to someone.

There is a suspense to much of film, because we don't know how her interactions with others will go, and Amirpour draws these scenes out for effect. Yet that's also one of the criticisms leveled at the film, as some scenes stretch on a little too long, even after their intended purpose has come and gone. If only there were a bit more meat to the story and a sense of urgency to the events, this film would have been perfect. It's a meandering film that doesn't really have anywhere in particular to go. As it is, it's almost all atmosphere and raw emotion, which make for an interesting, albeit slightly hollow film. What it lacks is a more clearly defined sense of purpose. Arash and the girl have clearly fallen for each other, but Amirpour doesn't allow them enough time to explore their relationship before facing an inevitable crossroads.

Despite it's many borrowed stylistic cues, this is a beautiful film. It's essentially "Only Lovers Left Alive" as directed by one of the 60's French New Wave directors. I like both of those things, and I like this film as well. For a debut film it shows a deft stylistic touch and attention to atmosphere and tone that's growing all to absent in modern cinema. For that this film stands in a class above most despite it's faults.