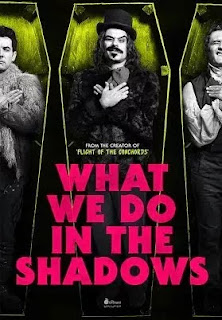 Last year, in a time where interest in vampires seemed to be waning, Jim Jarmusch treated us to his take on a vampire film in Only Lovers Left Alive. The result was something to be proud of. A dramatic vampire film for adults that worked. This year, for a change of pace, co-creators of Flight of the Conchords treat us to a different take on the vampire genre. A hilarious satire that's one of the funniest movies I've seen in years.

This satirical mockumentary begins by informing us that the crew has been promised safety from the subjects, and that it will follow these subjects in the months proceeding the New Zealand secret society's "Unholy Masquerade." We're introduced to Viago ( Taika Waititi), a 379 year old vampire who's still pining over his lost love. He lives with Deacon (Jonathan Brugh) the "young" 183 year old, self proclaimed "bad boy" of the group, and Vladislav (Jemaine Clement) an 862 year old vampire who fancies himself a bit of a ladies man, and seems to borrow his fashion sense from Bram Stoker's Dracula. And finally there's Petyr (Ben Fransham) an 8,000 year old vampire in the styling of Nosferatu. 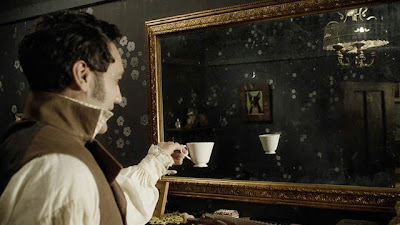 The film finds humor in these flat mates who have spent enough years together to drive each other crazy with their idiosyncrasies. They fight over who's finally going to wash the dishes, and settle on Deacon, who hasn't done it in 5 years. With vampires, everything is drawn out in years, rather than days, weeks, or months. There's a constant humor in the common practices of vampires, where the supernatural meets the everyday. Just about every piece of vampire lore comes into play here, and there's a comical scene dedicated to them. For instance, they don't know what they look like because they don't have a reflection, so they each draw pictures of each other to give a sense of what they look like before heading out for a night on the town. They even manage to make hilarious comedy out of biting someone and watching them bleed to death.

The characters aren't without a bit of depth though. Vladislav can transform himself into animals, but ever since a bit of unfortunate business with someone known only as "The Beast" (who's real identity comes out later on), he's been unable to get the faces right, which leads to a creepy, yet funny moment where he transforms into a cat with his own face on it.

Deacon uses his familiar (or servant) to introduce them to people they can feed on, and among them is her ex-boyfriend Nick (Cori Gonzalez-Macuer), a hipster who doesn't quite fit in with this odd group. Instead of just feeding on him, Petyr gets a hold of him and turns him into a vampire too, much to the chagrin of the other flat mates. Nick's a bit of a troublesome jerk, and his only real contributions to the group are his ability to get them into clubs, and his friend Stu (Stuart Rutherford), who the group takes an instant liking to. He works with computers for a living, and as such, he introduces them to modern technology, which allows them to reconnect with some old friends. Because he's a friend, they all agree not to kill Stu.

The very simple storyline of the film involves introducing the world (the documentary crew) to their way of life (as humorous as it is), before taking them to the secret society's "Unholy Masquerade." It's a ball, a gathering of all forms of the undead (vampires, zombies, werewolves). But the situation gets out of control when their friend Stu is discovered by the other undead, who can't resist a good meal. 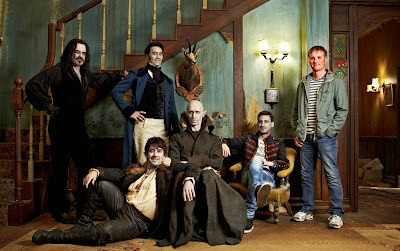 This is a nice story of friendship, between the vampire leads, and how they learn to accept a human into the group. There are also humorous scenes where they find friendship with a pack of werewolves who have their own set of humorous problems, like the fact that they ruin all their favorite clothes when they grow into giant wolves in the moonlight. The head of the pack, the alpha male Anton (Rhys Darb) comically tries to keep the werewolves in line, by repeating his tagline, "remember, we're werewolves, not swearwolves."

All these characters are undeniably lovable, particularly Viago (our primary host). They manage to make us care about these undead creatures, even for one of the side characters that has barely any lines of dialog. It's a truly refreshing satire about this bit of odd pop culture. It's hilarious and stylish, with a jovial tone even when things get bloody. It's a modern classic even better than Mel Brook's Dracula parody. It's a great buddy comedy with a lot of gags, and a lot of rewatchability.
Posted by Zach Owens
Email ThisBlogThis!Share to TwitterShare to FacebookShare to Pinterest
Labels: 2015, 4.5, comedy, friendship, horror