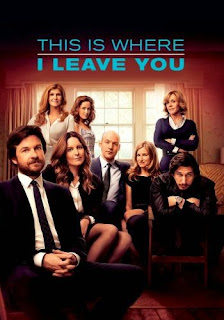 Shawn Levy is known for over the top comedies that try to do a little too much (Night At The Museum, The Internship). Here, he's working from Johnathan Tropper's novel of the same name. It boils down to the well worn trope of bringing a dysfunctional family back together under the same roof now that they're all adults, and watching them regress to a more childish state. It takes a special script, and a special cast to pull off a story that's been done so many times. While he's got a great cast, the script is not up to par.

Jason Bateman leads this star studded cast as Judd Altman, a radio producer, who recently caught his wife, Quinn (Abigail Spencer), cheating with his boss (Dax Shepard), and now has to join his family in grieving the loss of his father. Having lost his wife, his father, and quit his job, he's a character who should probably be in a lower place than the film ever lets him go.

"I'm much to old to have this little." 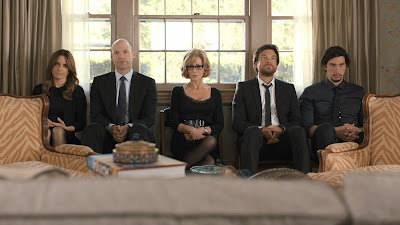 His father's dying wish was that the family would sit shiva, which involves gathering the family in their childhood home for a week, while mourners visit to pay their respects. Judd catches up with his siblings Wendy (Tina Fey), Paul (Corey Stoll), and their youngest brother Phillip (Adam Driver), as well as their significant others. Each sibling is struggling in their own ways. Wendy doesn't seem to get along well with her busy husband. We discover part of it could be because of her enduring love of her old boyfriend Horry Callen (Timothy Olyphant) who's never been the same since suffering a brain injury from a car crash. Paul and his wife Annie (Kathryn Hahn) are struggling with the fact that they may not be able to have kids. And Phillip, who constantly feels like the family screw up, is dating a rich, older woman in Tracy Sullivan (Connie Britton), who awkwardly enough formerly dated his older brother Paul. While some of these characters feel more genuine than others, there's simply not enough screen time to go around for all these famous faces. As a result, many of these characters feel wasted, particularly Olyphant's Horry, and Britton's Tracy. These side characters and subplots never feel fleshed out or resolved.

Judd, having witnessed his wife's infidelity, all too quickly moves onto Penny (Rose Byrne), a family friend who's had a crush on him since they were young. Things move awfully fast between the two, but she seems to come and go from the script whenever it's convenient for her to do so. As a result this feels like yet another subplot that feels sadly undercooked.

Jane Fonda as the mother Hillary Altman, also manages to feel wasted here. The character comes down to several tired tropes. She's playing the older lady who's all too comfortable talking opening about sex in ways that make her kids (and the audience) very uncomfortable. Plus, she's recently had a boob job and they come up as a topic of conversation all too often. There's no depth to her, she simply doesn't seem bothered by the loss. 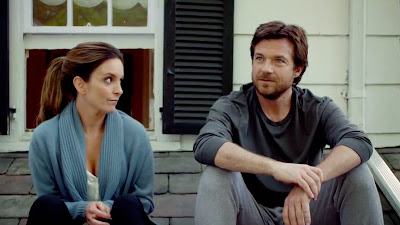 However, when it isn't trying way too hard for low brow humor, such as boob jokes, and quite literal potty humor, TIWILY manages some nice smaller moments. It's at its best when there's just two people on screen, but these moments give way, far too often, to larger group scenes focused on over the top comedy that doesn't work. Perhaps the most egregious of which is a scene where a baby monitor picks up a couple having loud sex in another room, while mourners try in vain to shut it off.

I can appreciate the idea that bringing adults back to their family and confining them in the house they grew up in might cause them to devolve to a more childish state, but these scenes betray the growth we've witnessed just a scene earlier. At some point you wonder how many more times they can get these characters to shout their awkward issues in front of the whole family and their grieving guests.

Where it ultimately fails, from nearly the beginning, is in its lack of respect for the characters and what they're dealing with. Death and heartbreak are not comical, yet the film tries to treat them as such. It's an attempt to blend over the top comedy with more contemplative drama, but the result is comedy that falls flat, and sincere moments undercut by attempts at humor. Like most of the rest of Levy's filmography, TIWILY, tries hard, too hard. While it has some moments that work, most of it doesn't. The moments that don't, hurt the sum of its parts drastically.
Posted by Zach Owens
Email ThisBlogThis!Share to TwitterShare to FacebookShare to Pinterest
Labels: 2.5, 2014, based on a novel, comedy