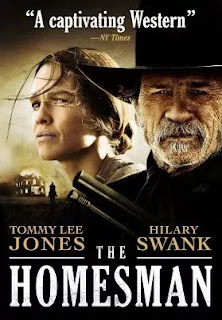 Directed by: Tommy Lee Jones
Based on the novel "The Homesman" (1988) by Glendon Swarthout
Netflix, Google Play, Amazon Instant
3/5*

The Homesman is a strange film. Despite the title referring to Tommy Lee Jones' character George Briggs, the film is about women, and the pain men cause them and the rest of the world. However, Briggs doesn't really take center stage until the last third of the film. The rest feels fairly uneven, until it ends in somewhat bizarre fashion. It begins in Nebraska's unmarked territories and, in a slight reverse of decorum for a western, travels east to a town in Iowa on the Mississippi River.

The trip is brought about when the town's reverend (John Lithgow) sends word to a friend in Iowa of three women who have lost their minds and need treatment in New York. They agree to take them there if the reverend can have them transported to Hebron, Iowa. They're damsels in distress, but not in the usual sense, they've lost their minds due to the pain of loss and abuse. While they're considered crazy, just about everyone else we meet is also crazy, or on the verge of becoming so.

There are numerous abrupt flashbacks to the terrible winter these people suffered through. It took the lives of livestock and a number of people, including children (particularly three children of one of the women) whether by the cold or disease. They also show some of the things leading to the three women's descent into their various states of insanity. These flashbacks are haunting images that creep up again and again. However, they are at times so abrupt as to be disorienting, even confusing the timeline of the film.

Mary Bee Cuddy (Hilary Swank) lives in this small town in the unmarked territories of Nebraska, where she has her own farm. She's a single 31 year old women growing more desperate for a husband by the year. An early scene shows her asking Ben, another farmer who helps her from time to time, to marry her and combine their farms. He refuses her, telling her that she's too bossy and plain (a criticism Briggs levels at her later as well), but most importantly he's heading out east to find a wife. She's so desperate for a husband that she even throws herself at Briggs, despite the age difference, in a haunting scene that has much bigger implications that we realize.

She volunteers to take on the venture out of sympathy for the women, where none of the men would. In fact the men that refuse the journey are the husbands of the women in need of treatment. They're all revealed to have been guilty of various degrees of abuse of these women, and are likely partially responsible for their conditions. Whether or not they actually care for their wives is never explored. In fact, once the group leaves the town, for better or worse, these characters are forgotten. 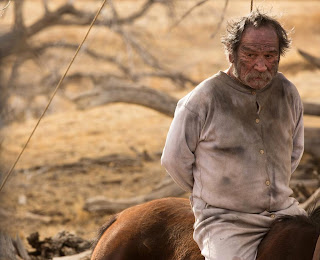 Mary Bee eventually comes across Briggs, a homeless drifter who had illegally taken up residency in Ben's abandoned house (while he had gone east). He'd been left to die until Mary Bee takes pity on him. In exchange for his life, he promises to help her. It's another example of the feminist undertones to the film. Where men cruelly left him to certain death, she shows mercy and helps reform his character. The result is that Briggs learns valuable lessons about life and sympathy toward those less fortunate in a world where every other man is portrayed as the bane of every form of life.

The landscape is flat and desolate. Even the town where Mary Bee lives appears small with short buildings. It's a picture of the supposed level of class of the citizens on the unmarked western frontier. Class plays a fairly constant role in the film once the travelers make it out of Nebraska and into just about any area with people. In fact, later on, they happen upon a tall blue hotel that appears a stark contrast to the locations we've seen up to that point. The color stands out against what had been a near sepia tone color scale, and the building stands tall, a beacon rising high out of the desolate flat lands surrounding it. As peculiar as it seems in context, the image serves its purpose. Inside the building are men of wealth and class who quickly refuse Briggs and his company of women on principle. 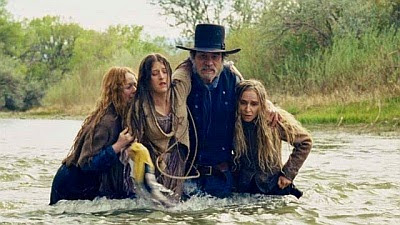 The relationship between Briggs and Mary Bee is a humorous one, that in some ways resembles the one found between the two leads of the Coen brother's "True Grit." Griggs is a vulgar drifter with no desire to settle, and Tommy Lee Jones' weathered face perfectly encapsulates the character's hardened emotional state. His characteristics stand in contrast to Mary Bee's straight laced, pious, sympathetic personality. The two studiously care for the three women along the way, and become kindred spirits through their travels. The three women, while at first, cause them trouble, eventually grow accustom to their presence, and follow them around as if calmed by their presence. There's even a scene where one of them falls in a shallow but fast moving stream, and the other two join Briggs in helping her out. While it's a moving moment, it feels completely at odds with everything we've seen from them earlier in the film (particularly for one of the girls that seems particularly violent).

However, a truly unexpected event occurs about two thirds the way through the film that threatens to derail the film. However, instead it shifts the tone, seeming to alter the stories intention. It brings with it (and the aforementioned clash of classes) the added implication for action, but instead this rising tension fizzles out and the film goes back to its leisurely pace.

Which leads me to the issue of time. Jones does a poor job of establishing the passage of time throughout the film. What feels like a few days was supposed to have been five weeks. And through that time Mary Bee and Briggs were to have built a strong, trusting friendship, but it never feels like they move beyond the tentative state of forced partners with nothing in common. For a film trying so hard to bring up feminist issues on the frontier, making Briggs (the only significant male character) the central character with which to take care of the women feels like an odd choice. But to their credit they way they handle to literal transportation of the women's plight onto Briggs is well done and established throughout the film. At first it's a class issue, but even after cleaning up and buying a fancy new suit, he is still unwelcome in the men's ritzy club. Having taken in these women when they needed help, he's received their problems as well. If men treat them like second class citizens, he's destined to be treated the same way. But all of this leads to a final ten minutes of the film that feels confusing and unnecessary. There were a lot of ideas here; almost too many. The pacing is slow and thoughtful, but even when things could have picked up Jones keeps "The Homesman" moving at a snails pace.

Overall, it's a strange film, and the fact that the main character doesn't show up for quite a ways into the film (and then only really becomes the central character late in the film) doesn't help it much. It isn't that these characters don't change, but often the changes are a little too abrupt. It also isn't that there isn't some compelling things happening here, but it's disappointing when thinking about what this film could have been.
Posted by Zach Owens
Email ThisBlogThis!Share to TwitterShare to FacebookShare to Pinterest
Labels: 2014, 3, based on a novel, Western