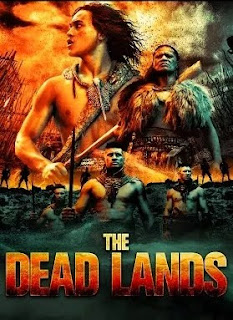 "The Dead Lands" is sure to appeal to anyone who enjoyed the brutal, bloody, adrenaline rush that was Mel Gibson's "Apocalypto." Rather than Mayans, Fraser presents a story about two warring Maori tribes in New Zealand before the arrival of the Europeans in the 17th century.

The story here is simple. Two tribes on the brink of war are pushed over the edge when Wirepa, the leader of one of the tribes, desecrates the burial spot of their ancestors in order to frame the other tribe. The supposed insult sparks a night time raid of the village that leaves only a handful of women and Hongi (James Rolleston, best known for his role in Taika Waititi's "Boy"), the son of the now deceased tribe's leader. He was fortunate to have been knocked down a hill where he could easily escape. However, to him and his people it's a great dishonor to be the lone survivor in a battle that saw the slaughter of his entire people. 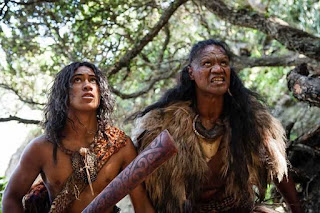 To get his vengeance and regain his honor he enlists the help of a warrior living in the Dead Lands, a place most fear to go for its legend of a monstrous ghost that killed and ate the tribe that formerly lived there. This monstrous ghost goes only by the name Warrior (played by Lawrence Makoare, a veteran actor of the Lord of the Rings trilogy), yet Hongi doesn't seem the least bit surprised to find that he's just a man. Its an odd disconnect from the rest of the story that involves a substantial amount of superstitions. The film seems at odds with itself, at times wanting to break down these superstitions, while at others believing whole-heartedly in their ancient beliefs. Later, in the film Warrior kills a group of people living in the Dead Lands simply to preserve his legendary status. They see him for what he is, which leaves him little choice but to kill them to keep the word from spreading. He uses this legend to keep unwanted people from invading his land.

Nevertheless, Hongi is allowed to enter his home and share his story with Warrior, whose wife insists he help Hongi in order to reclaim his own honor. Similarly, Warrior is the sole surviving male of his people, which allows him to sympathize with Hongi's quest. The film is at its best when exploring Warrior's personal demons, which involves a sad bit of backstory that I won't spoil, nevertheless, it's the reason he refuses to believe in the honor and nobility Hongi thinks so much about. Their individual journeys for honor and redemption keep this from being an otherwise empty action martial arts film.

Honor and nobility plays a major role in their culture. Understanding what drives these people is essential to understanding their motives. While its unclear why Wirepa leads his men against Hongi's tribe in the first place, after that the natural order to the culture demands retaliation. Inevitably, even if Hongi were to kill Wirepa, any surviving members of his tribe would be required to seek vengeance. It's a flawed cultural expectation that threatens the decimation of every tribe. 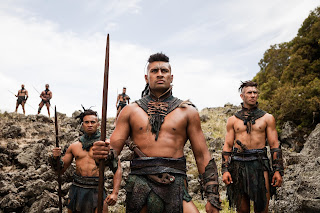 Warrior and Hongi train and prepare themselves while tracking Wirepa, who's taken his men through the Dead Lands as a shortcut on their journey home. Wirepa uses intimidation and tales of his own glory to keep his subordinates in line, but our sure sign of his evil is his willingness to kill even his own men if they argue with him. And since cannibalism is a common practice among the tribes, we are further disgusted by these villains when they drink their fallen comrade's blood and eat him to sustain themselves.

While tracking these enemies, Hongi's respect of his ancestors manifests itself on screen as trippy dream states in which he receives encouragement and advice from his long dead grandmother. These scenes are some of the most visually dazzling the film has to offer. Yet the New Zealand landscape remains as beautiful a shooting location as there is. But Fraser avoids capturing it in "Lord of the Rings" style wide shots, instead preferring close ups and shots peering through dense foliage.

The fight sequences feature a martial arts style known as Mau Rakau (meaning "to bear a weapon"), which uses paddle-like, traditional Maori weapons. There's an attempt made to find a balance between realistically gruesome violence, and over the top blood spurting action. However, as brutal as these scenes can be, they also, at times, feel over-edited to the point of being disorienting. However, the film's real weakness can be attributed to its main character, who never feels like he's driven to accomplish anything. James Rolleston, who I liked quite a bit in "Boy," doesn't play the character with any sense of urgency. He sets out because its expected, and continues because there's nothing left for him to do. However, he does make an important choice late in the film that feels, not only in keeping with his character, but essential to the future of the Maori tribes in the area. Makoare, on the other hand, steals the show giving a strong performance, and making a case that the film is really Warrior's tale.

I can appreciate this film's story of redemption, and the fact that it's a well made film getting wider release about the Maori people of New Zealand, a people not often shown in western media. As such, it does have the feeling of a culturally specific story, with certain elements doomed to be lost on certain viewers. It's attractively shot, but lacks the depth of character to push this film past other adrenaline fueled martial arts action films.