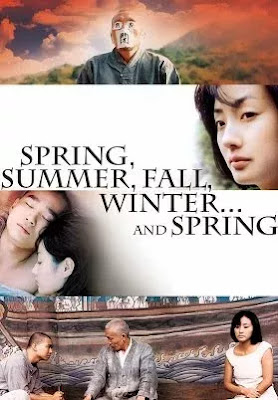 This is a film that I'd heard of somewhere. I don't remember where, or by who, or when it was recommended to me, but I had added it a watch list somewhere along the line. And by random decision, I rented it and watched it. Without having read anything about it before or after having seen it, I didn't know what to expect. But I'm glad to say I found it an extremely simple, and yet very moving film. Despite its simplicity, it encapsulates all of life. It's sparse on dialogue, and story, but manages to come full circle in an extremely satisfying way.

It takes place in a small temple, floating on a small lake surrounded by vast hills in all directions. Here, an old monk, raises a young monk teaching him the ways that had been handed down to him. There are no names. The characters are only old monk (Yeong-su Oh), and child monk, who grows to be boy monk, who grows to be young adult monk, and finally adult monk (played by Kim Ki-duk himself). Their story is broken up by seasons, and covers many years.

In and around this temple there are doors, but not for the purpose of shutting out, or hiding what's within. They aren't connected to walls, they stand on their own. They are, however, used as though they're the only way in or out. They are, I think, respected in the way that each monk who has come before them has treated them. Going around would be too easy. It would miss the point. So it's with dedication, that these doors are always observed as necessary means of entry. 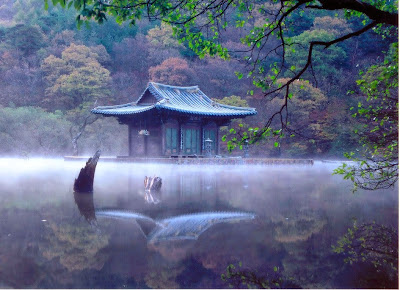 The lake, and the temple are the center of the world to this film. Despite the fact that the central character leaves a couple of times, our perspective is never allowed to leave this humble setting. Aside from a few guests now and then, this temple is home to the old monk, the young monk, and a handful of assorted animals. A rooster, a cat, a turtle, some fish, and perhaps a few others come and go from the place keeping the monks company.

The child monk in training rows out to shore to find herbs, which his master teaches him to use to make medicines. Eventually during one of his trips ashore he mischievously ties a rock to a fish, and giggles while he watches it try to swim under the added weight. He does the same to a frog, and a snake, laughing the whole time. Little does he know his master, having sneaked over, watches in dismay. For his cruelty, the master forces the boy to return to the shore with a heavy rock tied to his back. He tells him that if he frees the creatures from their burdens, he will take the rock from his back, but if any of them have died, he will carry the burden forever in his heart.

There's a certain amount of mysticism here that may or may not go unnoticed. The ornately painted rowboat used seems to tether itself to a tree near the lakes entrance, and at times returns to the temple with no one on board. Also, the master seems able to follow the boy ashore despite the fact that the boy had already taken the boat. I suspect it has something to do with the fact that your deeds are never unseen, but there is certainly a magical something about this place. 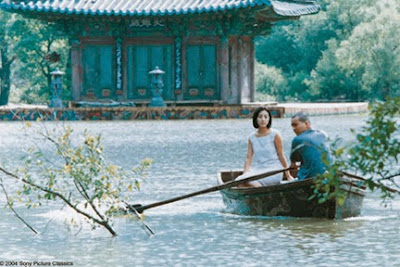 Eventually a sick young lady, about the young monk's age, now likely a teenager, comes to visit hoping to be cured of her illness. The two young ones find fascination and love in each other's arms. It's yet another stage in life. As a matter of fact, the boy is Kim Ki-duk's representation of life. When the old monk catches them together, he sends her away, which causes the heartache that forces the boy to abandon the temple for a while. The old monk warns him, that “Lust awakens the desire to possess. And that awakens the intent to murder.” Kim Ki-duk takes his representation of life naturally through every emotional state. He goes through learning his childhood lessons, to falling in love, to learning to deal with the grief of lost love, and the rage it causes within. It's not immediately apparent to him, but in a moving scene, weighed down by a stone dragging behind him, he treks up the hill to its highest point while flashbacks of the fish, the frog, and the snake play in his mind.

The film is beautifully serene in its simplicity, both in terms of its story, and the way it was shot. It's a beautiful location, and it's a simple summation of life as we know it, with all the pleasures, angers, and sorrows. Having started the child in need of growing up, he finds himself the caretaker of a child much like himself. Those doors I mentioned earlier, standing by themselves next to open walls, provide the necessary path through which we must instruct the next generation to follow.
Posted by Zach Owens
Email ThisBlogThis!Share to TwitterShare to FacebookShare to Pinterest
Labels: 2003, 5, drama, indie, Korean, touching