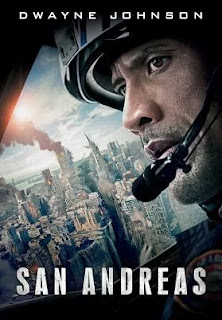 There's a scene at the beginning of "San Andreas" that essentially informs what we're in for, for the rest of the film. A girl drives down a winding road, and as soon as we see an oncoming car, she takes her eyes off the road to reach for something. As we prepare for the worst, the oncoming car passes without incident. Then a second car comes, and again she looks away to check her cell phone. As the saying goes, "...fool me twice, shame on me." Of course the second car passes without incident as well, but her car is run off the road anyway when rocks fall from the cliffside above. This pattern follows again and again the rest of the film.

Like any big budget disaster film, there are a set of tropes the audience knows to look for, and this film tries to use those to get the audience going before upping the ante one more time before allowing the characters a narrow escape. The girl whose car now hangs precariously on the cliffside is saved by Ray (Dwayne Johnson) at the last second. He flies a rescue chopper in LA, and suffers from the pain of having lost one of his daughters in a river rafting accident. He blames himself for failing to save her, and his depression causes a rift between he and his wife Emma (Carla Gugino), who are on the verge of divorce, though he maintains strong relations with his other daughter Blake (Alexandra Daddario).

There is a completely unnecessary, cliche, "Hollywood" subplot involving Emma's rich, new boyfriend Daniel Riddick (Ioan Gruffudd) who cowardly runs away from saving Blake in a later scene, just to make us hate him so that we'll feel good about it when he gets what's coming to him later on (as if we expect anything else). This may be one of the more tired tropes in Hollywood's arsenal: the rich jerk we're made to hate just to make us root for this broken family even more. His only real contribution to the script is as a means of transportation for Blake from LA to San Francisco.

Another tired cliche present in the film is Paul Giamatti's Lawrence, a Caltech Seismologist who discovers the ability to predict the coming disaster, but of course, no one believes him till it's too late. The quake headed for San Francisco is predicted to be over 9.0, and eventually makes it to 9.6, making it the most destructive earthquake in recorded history. Lawrence and a coworker learn to predict it while tracking a series of small earthquakes in Nevada preceding the main event, however this ability seems inconsistent, or perhaps more accurately essential to the services of the script. Once they discover they can predict earthquakes with enough time to warn the people of LA and San Francisco, another suddenly pops up but their prediction only grants them mere seconds of warning before the quake hits. This, of course, triggers a typical scene in which one of the seismologists sacrifices himself to save a frightened child cowering in fear, unable to move, whose parents are nowhere to be found till after she's made it back to safety. We expect to see the destruction of major landmarks in a film like this, and this time around the Hoover Dam and the Golden Gate Bridge are the victims.

By now you're noticing a pattern. Tired tropes, and expected "Hollywood" moments allow us to more accurately predict the events to follow than Lawrence predicts earthquakes. 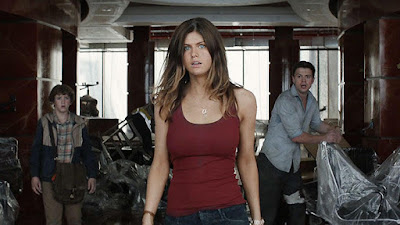 Blake finds herself in San Francisco travelling with a pair of vacationing Brits Ben (Hugo Johnstone-Burt), here for a job interview, and his younger brother Ollie (Art Parkinson). The two saved her life after Emma's new boyfriend Daniel left her behind. While the film begins with her a damsel in distress, she emerges later in the film a strong leader, and the most capable of the group. She's learned more than a few survival tips and tricks from her rescue pilot father, including the fact that landlines still work even if cell service is down. Having found a landline she's able to contact Ray in his chopper in order to set up a meeting place.

After Ray picks up Emma atop a crumbling building in a scene that continues to up the ante repeatedly. She climbs the stairs as the building collapses all around her, then, having made it to the top she signals over Ray in the chopper. However, that not being enough, the already crumbling rooftop bursts into flames while the building falls out from under her feet. Even after making it into the chopper, again, that's not enough. As they attempt to fly out of the area, buildings topple all around them forcing some dangerous flying. 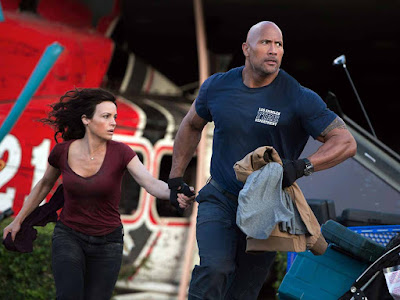 Mom and Dad now together in the chopper fly from LA to San Francisco to find Blake. But lest that be too simple, they're forced to the ground to make the trip last longer. Which undoubtedly leads us to question, the wide ranging knowledge of Ray. He knows not just how to pilot a helicopter, but hotwire a truck, and fly a plane, which they later skydive from. It's all too convenient that he's capable of performing any task the script requires of him. I can almost see the checklist of action movie moments being checked off one at a time.

Blake and the two Brits attempt to travel to safety in the midst of repeated quakes and eventually a tsunami that drowns the entire city. It's such an effects heavy film that they're required to be great to keep our suspension of disbelief working, yet they seem to range from poor to surprisingly convincing. They are perhaps both the best and worst parts of the film on their own. Nevertheless, Mom and Dad face the near impossible task of finding Blake in a waterlogged city of crumbling high rises.

This movie borrows from the cliches of every disaster movie you've ever seen. It also may as well pause to say, "this is expository information," before lengthy scenes involving exactly that. There were multiple times in which I found myself annoyed by characters stopping in crucial moments to deliver lines like, "don't worry, I'm gonna get you out of here!" rather than simply getting that person to safety the way a real person would. The family drama at the center of this film also feels very contrived. In fact, I'd be shocked to hear that anyone couldn't predict the outcome of this familiar family outing from the moment it's setup.

And now you're wondering about the scientific liklihood, just how possible is this film in the first place? Thankfully U.S. Geological Survey seismologist Dr. Lucy Jones informs us that California is safe from an extreme event such as this:

"...both the magnitude of the shaking and the damage displayed are exaggerated beyond reality. Magnitude 9 earthquakes only occur on 'subduction zones,' places where tectonic plates collide, pushing one plate under another and deforming the sea floor to create tsunamis. It has been millions of years since there was an active subduction zone under Los Angeles or San Francisco. The modern day San Andreas Fault maxes out at about magnitude 8.3, and, being mostly on land, will never produce a big tsunami."

If you want to read more of her explanation about what's real and what's not, you can read her article here.
Posted by Zach Owens
Email ThisBlogThis!Share to TwitterShare to FacebookShare to Pinterest
Labels: 1, 2015, disaster film