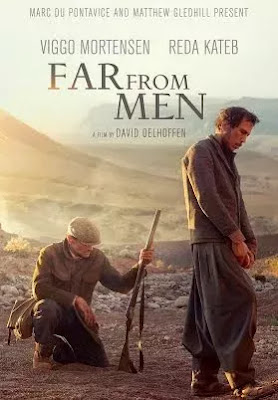 Based on Albert Camus' short story "The Guest," Far From Men expands upon the story of Daru (Viggo Mortensen), a French teacher, who befriends an Algerian criminal in the 1950's during the Algerian Revolution. Daru's schoolhouse sits in isolation surrounded by a landscape of barren, rocky hills. While these lifeless, barren vistas serve as a visual representation of the title Far From Men, they also convey death.

While, Camus' short story takes place entirely in one location, the film forces the two leads out on the road. Early on, Mohamed (Reda Kateb) is delivered to Daru, a former military man, who's tasked with escorting him to Tinguit where he'll stand trial, and likely be put to death. Between this mission, and the films overall style, the film feels a little like the Western classic 3:10 to Yuma. The two become trusted allies in the trials faced on the road.

What Oelhoffen's risky move allows is a tour through challenging surroundings. It allows us to experience the war ravaged people populating this barren land. When they are captured by rebels, we meet several former military friends of Daru. Despite their friendship, war has changed the situation, they hold them captive and ask if Daru would join them. But like before, he's intent on remaining neutral. Soon after the French army surrounds them. Daru and Mohamed are forced to witness the death of the entire band of rebels, including several who had attempted to surrender. It forces questions of loyalty, allegiance, and neutrality. War is never easy, but it's worse when you're caught in the middle. The French consider them Algerian, and the Algerians see them as French. Neutrality isn't a side the war sees. Viggo Mortensen (who shows a mastery of both French and Arabic) plays Daru with a subtlety that suggests he's seen enough bloodshed in his years that he can't stand to witness more. Every death in the film seems to weigh more heavily on his conscience than the last. 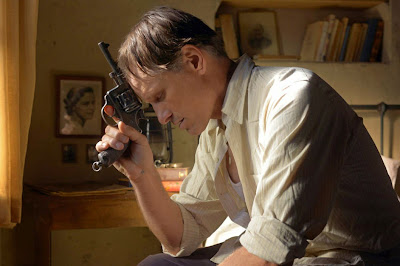 While it occurs during the Algerian Revolution, it's merely a backdrop. These characters attempting to exist outside the war, and their budding friendship take center stage. The themes presented here are universal. Nevertheless, these characters are forced to live in a stark world where everyone around them has forgotten the value of life. The basic human right we take for granted is the freedom to choose our own future. Camus' short story is about choice. Even when situations don't seem to grant one, we face choices. Both men make their choices fully willing to accept the consequences for doing so. Mohamed chose to kill his cousin to protect his family, knowing full well their custom of "an eye for an eye." His cousin's family must return to kill him, and after that his own brothers must kill his killers. To end the vicious circle before it gets out of hand, Mohamed chooses to turn himself in to the French, knowing full well he'd be killed. 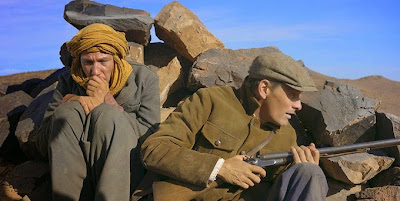 Daru's willingness to take Mohamed to Tinguit is a choice made in the interest of keeping his own conscience clear. To have left him alone would be a death sentence. After having escorted him, Daru has more difficult choices to make. They both show the courage, and honor by accepting their inevitable fates, because sometimes, the consequences for your choices, don't make them any less right.


At one point, Daru questions the honor and courage of Mohamed. He assures Daru that he's not lacking either, and the short story (and much of the film) agrees with him, however Oelhoffen reimagines the ending in a way that betrays Camus' purpose. Also unlike the short story, which is much clearer in its implications for Daru, the film leaves things a little more open. While his part does essentially come to a similar ending point, the expansion of the story, and examination of Daru's character allows the final scene an opportunity for multiple interpretations.

These alterations are sure to cause anger in fans of the original story. Nevertheless, it's a thought provoking journey. It's a buddy drama that's attractively shot, well acted on all accounts, and clearly inspired by classic Westerns. Viggo Mortensen continues his trend of turning in strong performances in films flying under the radar. Far From Men is one of his stronger films of the last few years.
Posted by Zach Owens
Email ThisBlogThis!Share to TwitterShare to FacebookShare to Pinterest
Labels: 2015, 4, based on a novel, buddy story, drama, thought provoking