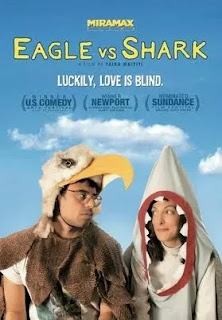 There's two possible ways you could look at this film. It came out in 2007, just a few years after the massively successful (albeit polarizing) Napoleon Dynamite, and it shares more than a few of its quirky stylistic choices. It also came out just a year after Michel Gondry's quirky The Science of Sleep, with even quirkier practical special effects. Taika Waititi's Eagle Vs Shark feels like an amalgamation of these indie quirkfests, that may just be a little too familiar for some to ignore. The other possible viewpoint is that those films paved the way for a film subgenre in the mumblecore vein, and Eagle Vs Shark is just another film for fans to enjoy. I tend to not fault a filmmaker for borrowing stylistic choices, so long as they aren't straight ripoffs, but Eagle Vs Shark dances the line dangerously close throughout its entire runtime.

The story is told from the perspective of Lily (Loren Taylor, who co-wrote the story), an awkward, socially inept, waitress at Meaty Boy, who even her co-workers can't stand. She has a very obvious crush on Jared (Jemaine Clement), another socially awkward mall worker who sports a mullet and retro, large lens glasses. 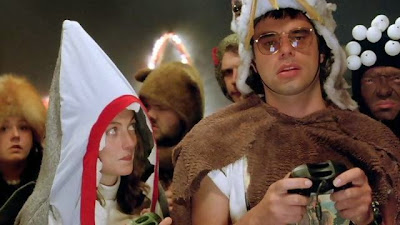 She winds up at his costume party, a sparsely crowded affair mostly made up of teenagers and young adults who patron the store Jared works at. He becomes impressed by her when she successfully climbs the ladder of their video game tournament. He likes her even more after they spend a humorously awkward night together. Having been fired from her job, she accompanies Jared to his hometown to meet his family. However, at about this time, Jared begins acting very cold to her. But in this time spent among family we begin to learn just how he got stuck in this state of arrested development. In fact, his whole purpose of returning home is to restore family honor by fighting an old high school bully that used to pick on him.

Waititi spends much of the film making Jared humorous, but mostly unlikable, however over time, he allows us to sympathize with the character as well. Lily, on the other hand, being stuck there with no where else to go, begins to bond with his family and friends. She adapts an almost motherly quality while taking care of everyone.

It follows the standard issue romantic comedy outline: the meet cute, the hook up, the breakup, and the resolution. But what the story is more interested in, is how these two awkward, lonely characters grow and finally feel alive, and they are essential to each other achieving that goal. 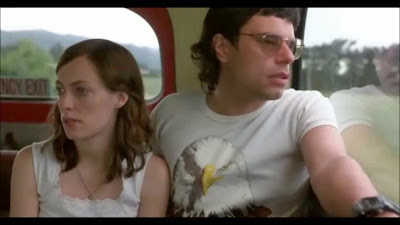 Much like Napoleon Dynamite, the clothing, and hair style suggest the film is set in the late 80's or early 90's, yet references to 9/11 and Austin Powers films make it clear it's set around the time of the film's release. While it's subtle, awkward humor is likely to amuse some and irk most everyone else, the humor comes mostly in the form of characters with odd passions, pursuing them in an odd manner, and yet there's something uniquely charming about it all.

This was Taiki Waititi's directorial debut, and normally you look for something to make you excited about the filmmaker's future work. Eagle Vs Shark was a mildly entertaining, albeit unoriginal film that's become something of a cult classic. Thankfully Waititi's next films showed clear signs of a maturing filmmaker. Boy (2010) was a far better, and much more charming film, and What We Do in the Shadows (2015) was absolutely hilarious. At the rate he's going, I can't wait to see what he does next.
Posted by Zach Owens
Email ThisBlogThis!Share to TwitterShare to FacebookShare to Pinterest
Labels: 2007, 3, comedy, indie, New Zealand