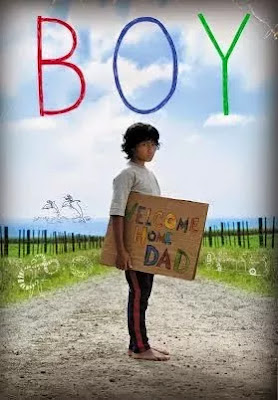 Boy (James Rolleston) is an 11 year old Maori kid named El Alamein living on the east coast of New Zealand in 1984. Named after his dad, who was named after a random place on a map, but everyone just calls him boy, and that suits him fine. He narrates the expository opening sequence, a Wes Andersonesque breaking of the fourth wall, set to upbeat music with quick cutaways, heavy on tracking shots, close ups of maps and hand drawn pictures.

The most important information is that his mother passed away, his father is in prison, and his grandmother, who normally takes care of them, left for a while, placing him in charge of his siblings. However, while she's away his father, Alamein (Taika Waititi) shows up with a couple of his mates. We can't be sure if he broke out of prison, or if he was legitimately released. Either way he's primarily back to search for his stash of money, buried in a nearby stretch of green. However, the opportunity allows Boy and his younger brother Rocky (Te Aho Eketone-Whitu) the chance to get to know him. Knowing it's set in the 80's the name Rocky makes for a fun reference, as does Boy's obsession with Michael Jackson's Thriller.

For a good portion of the film, there's a fun spontaneity in the vein of Wes Anderon's Bottle Rocket, or even Takeshi Kitano's Kikujiro (another film about an irresponsible father figure taking care of a young boy). However, where Kikujiro learned to be a good father figure, Alamein is more like what we imagine Bottle Rocket's Dignan (Owen Wilson), a humorously incompetent, yet always earnest criminal, would be like as a father.

Boy spreads fanciful stories about Alamein's exploits, the way a young boy inevitably does when they still believe their fathers are the coolest men alive. Riding in his car, and being seen with him and his gang finally makes the other kids his age take notice of Boy. He's infatuated with the idea of joining his dad as a member of his "Crazy Horse" gang. Alamein is mildly obsessed with samurai and makes everyone call him "Shogun" (after the 1975 James Clavell novel of the same name), and for a time he plays the part of caring father. He plays games with his sons and gives them gifts, that we can only assume are stolen. However, it doesn't take long for his self serving personality to show. While at first it rubs off on Boy, soon enough Alamein's actions begin to hurt everyone around him. 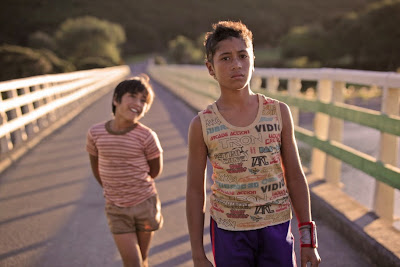 Boy has to mature beyond what his father ever managed, especially considering he's responsible for his younger brother, and a house full of young ones. Rollston's performance, appropriately, shows maturity beyond his years. It captures the spirit of a youth trying to make a name for himself in his community, and later on the depth of a young man learning the importance of responsibility.

Taika Waititi gives a strong performance as Alamein, while thankfully avoiding turning him into a truly evil villain. He may be irresponsible, and self centered but he's not cruel. Waititi even manages to bring a subtle humor to the character. He's become a veteran director of TV with shows like The Inbetweeners, and Flight of the Conchords, and films like Eagle vs. Shark, and most recently What We Do In The Shadows, a hilarious mockumentary about vampires from earlier this year. In what was just his second feature film, Waititi writes and directs this coming of age story, showing an impressive skill for comedy and a deft touch for blending it with more dramatic elements.

Supposedly Taika Waititi's working title for the film, while writing the screenplay at the Sundance Writers' Lab was "Choice." Thus begs the question, what will Boy choose to do next? Having already debunked his obsession with his irresponsible father's way of life, it seems the sky is the limit for someone as smart and capable as Boy.
Posted by Zach Owens
Email ThisBlogThis!Share to TwitterShare to FacebookShare to Pinterest
Labels: 2010, 4.5, family, indie, New Zealand