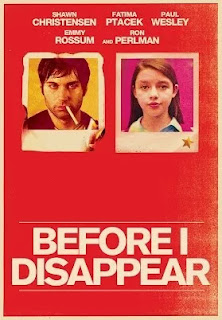 Based on his Oscar winning short film "Curfew," Christensen directs and stars as Richie, a man on the verge of committing suicide when his sister Maggie (Emmy Rossum) calls to ask him to take care of her daughter Sophia (Fatima Ptacek) for the night. Films about unsavory uncles/father figures taking care of kids who help reform their character are becoming a dime a dozen, but we haven't yet reached a point of over-saturation. And if it's done well, and manages to feel different enough, it'll be a welcome addition to the growing genre. "Before I Disappear" is a good one, but not a great one.

For a film about a suicidal man and his sister who is caught up in domestic violence charges with her married boyfriend, this is surprisingly humorous, particularly when Sophia and Richie's different personalities clash. When we first meet Richie, he's in a bathtub full of blood red water, but the natural habit of answering a phone when it rings causes him to patch himself up and save it for another time. Then we meet Sophia, a charming, smart, but somewhat uptight 11 year old who perhaps reminds him of Maggie when they were kids a bit too much. Where Richie never had his priorities straight Maggie excelled at everything. Now, she tries to keep Sophia safe from Richie's bad influence by keeping him out of their lives altogether. But when she's stuck in central booking awaiting arraignment (which isn't until 4 in the morning), he's the only person she can call. 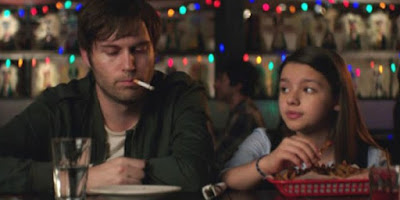 Having Sophia gives him necessary structure, and a reason to exist, even if just for one night more. Sophia, on the other hand, gets to have an adventurous late night, the likes of which she's never had before. The two connect over a shared interest in drawing, and Richie shows her his old sketch flipbooks that feature the "Looney Tunes"-esque adventures of a girl named Sophia, which prompts them to wonder if Maggie named her after Richie's comical drawings.

The bigger trouble here for Richie is that he was attempting suicide to escape paying the $800 he owes to Bill (Ron Perlman), a nightclub owner who dabbles in drug dealing. Perhaps even more than that he hopes that in death he can reconnect with his lost love Vista (Isabelle McNally). He writes her a combined love letter/suicide note, but can't seem to get the words right, so he writes draft after draft until he gets it just right. However, more concerning, now that he has to survive long enough to take care of Sophia, is the fact that he's caught between two criminals. He owes the money to Bill, but he's been hiding important information from Gideon (Paul Wesley) who owns a bowling alley and deals drugs on the side.

Whether it's from the loss of blood, the late hour, or more likely the drug use, Richie has visions (or perhaps lucid dreams?) of the dead girlfriend of Gideon (who reminds him a bit of Vista), as well as visions of Vista herself. These are some of the most unique moments the film has to offer. One of the more memorable dreamlike moments is a scene in which Sophia dances to a song at the bowling alley and everyone seems to join in with her. The film is undoubtedly at its best when Richie and Sophia are together on screen, but it seems constantly distracted by the criminal underworld Richie has involved himself in. It stinks of the sort of unnecessary filler material intended to stretch a short film's worth of content to fit a feature length runtime. However, it's well shot, well acted, and oddly affecting, particularly toward the end when Richie finally encounters Maggie after such a long time. There's a lot of cruft here that likely cut short what could have been more time spent with the lead characters. Despite this, "Before I Disappear" is a promising debut for Christensen, who gives a solid performance, and presents a touching story with some impressive visual flair. We'll have to keep our eyes open for him in the future.