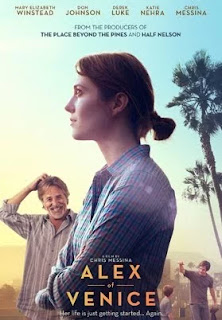 "Alex of Venice" is the perfect example of a typical indie drama. I say typical, because nothing sets it apart, as if Messina (an actor making his directorial debut) was afraid to do anything too out of the ordinary. It takes place in the Venice beachfront neighborhood of Los Angeles. We can easily understand the setting we're in for by the fact that these pot smoking, beach dwelling, environmentalists of California have a son named Dakota, who has an adolescent crush on a girl in his class named Rain. Yet as colorful as all that sounds, it has no baring on the characterizations.

The plot description for this film claims that Alex (Mary Elizabeth Winstead), a workaholic attorney for an environmental non-profit, is forced to reinvent her life after her husband leaves her. That isn't really what happens though. Instead her father, Roger (Don Johnson) invites her estranged sister, Lily (Katie Nehra) back home, and Alex pawns her family responsibilities off on her, only to later complain about what a bad job she's done. In the beginning there's an attempt made to establish Alex as a workaholic too busy to take care of her family, however for most of the rest of the film she's either at parties, going on dates (even sometimes in the middle of the afternoon), or otherwise shirking her responsibilities to both her family and her workplace.

If part of the point was advocating the importance of family over work, the message seems lost in all the "essential" indie movie moments shoehorned into the script. The court battle she's fighting is to preserve the Ballona Wetlands, a place she fondly remembers from her childhood, and hopes her grandchildren can also enjoy. However, a wealthy businessman (Derek Luke) intends to build a spa on the location, but that doesn't stop her from getting drinks with him, and sleeping with him several times when her sister convinces her that it's a bad thing that she's only ever had sex with her husband. Her work could have been one of the more interesting aspects of the film, yet most of the time it feels like a forgotten subplot. It isn't explored in a satisfying way, and ends in an even less satisfying way. Worse yet, her relationships don't really go anywhere, even that of her relationship with her neglected son, who she continues to neglect throughout the film.

While Lily ends up being the one to look after Dakota, she also keeps him out of school and gives Alex plenty of bad advice. However, there are no consequences to any of her actions, and there's no resolution to the rift that forms between her and Alex by the end of the film. And the father, Roger, is a struggling actor who gets the part of an old man in a stage play whose story is all too similar to his fears for the future of his family. He also clearly suffers through the beginning stages of Alzheimer's, which makes his preparation for the play even harder. Sadly enough, he might have been the most interesting character here, but the film relegates him to a fairly small subplot in favor of Alex's far less interesting storyline.

This is an indie that's trying so hard to be an accessible film that it ends up feeling mundane. It shies so far away from anything quirky, both in terms of its characters and its styling, that it feels like the safest movie Messina could have made. Messina has claimed Woody Allen, and Sam Mendes as inspirations, and claimed to have been going for "quiet naturalism." While it is quiet, that's not a mark in its favor. The result is a film lacking personality whose story goes nowhere. There's so many moments that don't matter or connect to anything else in the film. I will say, there are some interesting ideas, and the potential is there, which makes it all the more sad to see it squandered this badly.