The Kingdom of Dreams and Madness (2013) 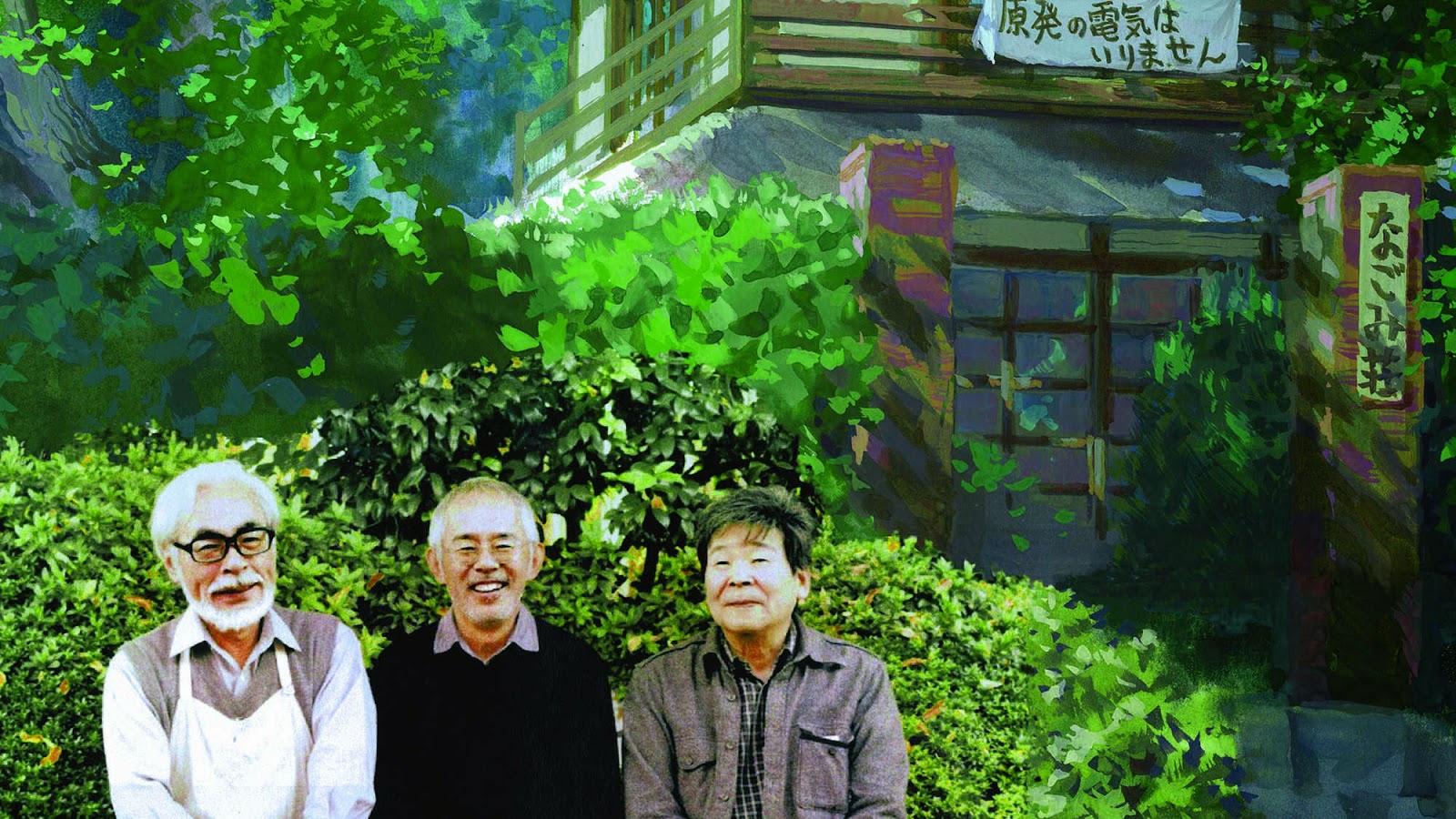 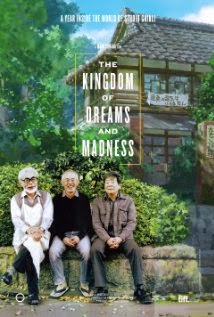 For added effect play the music in the video at the bottom of the post while reading...

The Kingdom of Dreams and Madness could have made a better title for a documentary about Studio Ghibli, how they work, and how they choose what to work on. A real behind the scenes about how Ghibli's brand of animated film gets made. However, that isn't really Sunada's purpose with this film. Instead she allows us a voyeuristic view of Miyazaki and his animators working to finish his final film. Mami Sunada doesn’t present Ghibli as a standard documentary with seated interviews. She doesn’t attempt to build tension or make more of Miyazaki's life and work than it is. She observes like a fly on the wall, picking up random thoughts. Occasionally she can be heard asking questions in response to these thoughts, but for the most part it’s an uninterrupted view of Miyazaki while he goes about his business.

The title is, however, fitting of the work coming out of the building that houses Studio Ghibli. Miyazaki claims himself a 20th century man living in the 21st century. The building looks the part as well. It's almost a museum piece. There's an aged beauty to it all, much like his films. Not a single computer can be found on the premises. All the work is done by hand on paper. Even his home has an old fashioned look and feel. We don't see large flat screened TV's or computers anywhere. Miyasaki is presented as a simple, and somewhat old fashioned man.


"In your work you’ll meet lots of people, but it’s the people you work with. Only those who choose the right people to work with will be able to do the work they want."

At times the documentary feels like a tale of three people, including perhaps two of the most important people in Miyazaki's life. His producer Toshio Suzuki, who had worked with him his entire career, and Isao Takahata ("Paku-san"), the man who helped co-create Studio Ghibli before breaking away to make his own films. We are given a number of flashbacks of footage from years earlier. The three men work together and obviously enjoy each other's company. These images are contrasted with today, when Suzuki works with both men separately. But they remain friendly competitors, both of whom work to finish what will be their final films. Takahata's The Tale of Princess Kaguya is set to be released the same day as Miyazaki's The Wind Rises. All three men constantly question whether they'll ever finish their respective films, or even whether they want to or not. Miyazaki chats with his assistant, and Sunada, as he works. He frequently speaks of the earthquake, tsunami and the resulting nuclear power plant disaster. He shows, with a heavy sigh, the pictures of the damage, and the white board he’s been using to track the recovery. Despite his busy schedule, he’s personally spent his time helping in the relief effort. It’s obvious it weighs heavily on him, more so than even the film he’s working on. He proudly shows the camera page after page of photos he’s put together in an album documenting the recovery process since the day it happened. He says he expected to document the depression, but instead found life as usual. As if to show how unbreakable the human spirit is. These moments when Miyazaki is off by himself with the camera, outside of the office, he tends to drop random pieces of profound wisdom.


“Problems begin the moment we’re born. We’re born with infinite possibilities, only to give up on one after another. To choose one thing means to give up on another. That’s inevitable. But what can you do? That’s what it is to live.”

Much the way life is an organic process, things change and evolve in ways we can't always anticipate, Miyazaki makes the comparison to how organic the filmmaking process is. We often don’t know where it’s going. Miyazaki remarks how uncertain the future is, but ever since the disaster he's had a sense of dread. He knows his career will end with the finishing of The Wind Rises, and ultimately his company will fade away. He explains that Ghibli is just a name he picked up from an airplane. He has no doubt his company will fade away, or change entirely in his absence. "It's just a name." He says. For a man who makes such pleasant, uplifting films, he looks at life and his own work pessimistically. 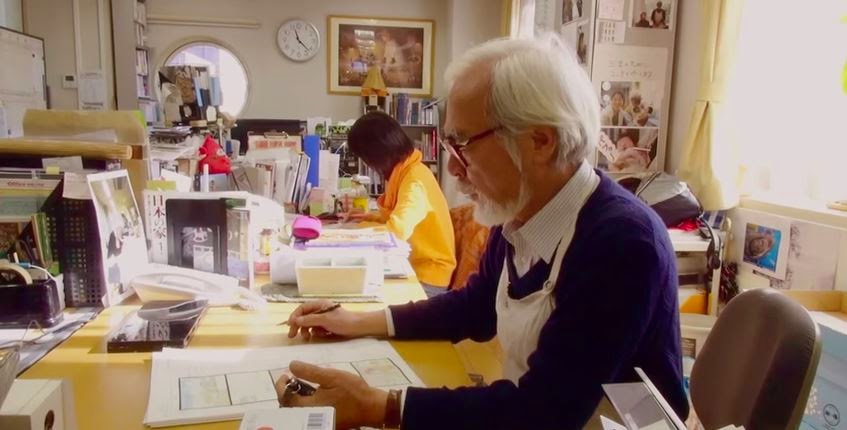 The Wind Rises is the story of Jiro Horikoshi, who designed many Japanese fighter jets during WWII. Jiro was very ambitious and dedicated to his work, but also very much anti-war. Much like Miyazaki himself. In fact Jiro in the film, is based on his father. Through personal stories shared with the camera we begin to see just how closely modeled the character was. Through this film, he was able to rediscover his father. Hearing him speak of his father, and the parallels made within the film are some of the most touching moments of the documentary. Despite all of this, distributors, and society in general, seem to worry about the subject matter. Miyazaki and his circle of friends and coworkers lament societies sensitivity, and the constricting effect it has on creativity.

He seems to believe unrestricted creativity is dead. Perhaps it's the fact that it's his final film, and his career coming to a close, but Miyazaki was very reflexive throughout the film. It's not while he's at work surrounded by his friends and animators, but in small moments alone. He confides to Sunada, "How do we know movies are worthwhile? When you think about it, is it not just some grand hobby? Maybe there was a time when you could make films that mattered, but now? Most of our world is rubbish." It's said as if he's thinking back over his life and career and wondering what it's all been for. Hoping to find some meaning.

He makes comparisons of the state of the world these days, to the state of things before WWII. As if a warning to this generation to be happy for peace, but mindful of an impending darkness as we all head for the unknown. No one could have predicted the war breaking out or how costly it was. Some of these statements play alongside images of him and his team at conventions looking around at the carefree people of Japan enjoying freedom. Oblivious to any of his warnings. Yet at other times he seems at peace, as if trying to live out the rest of his days relaxing in serenity. Yet before he can reach that point he must finish his final film. 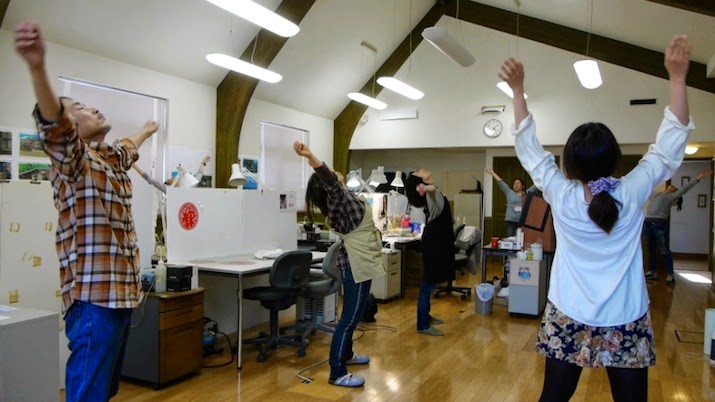 There's a meandering quality to the film that makes it, and it's discoveries feel natural and unplanned. Sunada gives us many shots around the studio before anyone has come in, or after everyone has left. A reminder of where all the magic has taken place over the years. Where people have spent many late nights to finish up their work. Where they do their calisthenics every morning. Where congratulatory celebrations were held. Where we hear from his team of animators who speak of what it's like to work with Miyazaki. We see him teach this younger generation of animators about old Japanese manners that will help put them in the right mindset for the film they're making. The team talks about how difficult it can be to work for him, how much of a perfectionist he is. It's the building, where he's done most of his life's work, and the people who've helped him achieve that work, that Sunada tries to capture. 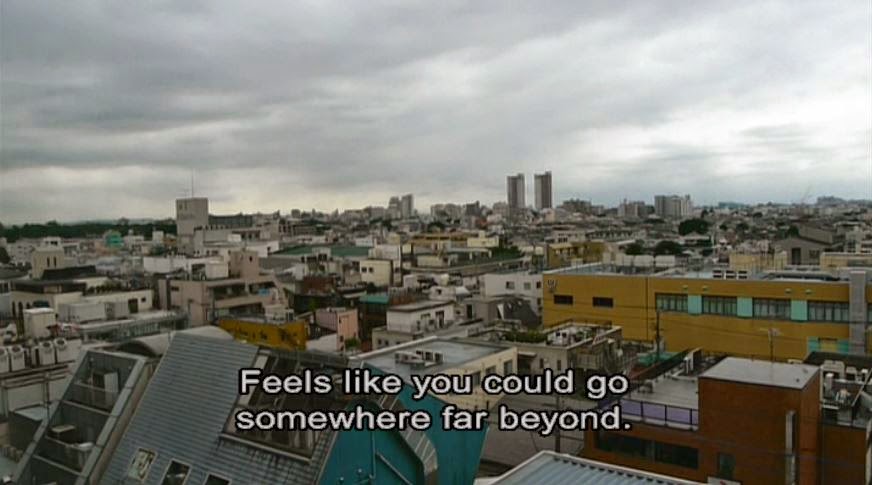 There’s a scene just before the press conference to announce his retirement, where Miyazaki asks the camera to come to the window. He gazes at the view for a moment. As they look out, he points out a man watering his plants. He describes jumping from rooftop to rooftop, climbing pipes, and racing across telephone wires, running along the brick wall and jumping further and further. As he describes this, we cut to moments across his filmography where characters jump across rooftops, catwalk over wires, and run and jump across all manner of scenes. Having completed The Wind Rises, at age 72, he’s about to announce his retirement. Yet he still sees the world with a childlike fascination. Gazing out a window at the view below sparks all kinds of fascinating stories from his imagination. Everywhere he looks, there’s another story taking shape. Infinite possibilities just on the horizon. 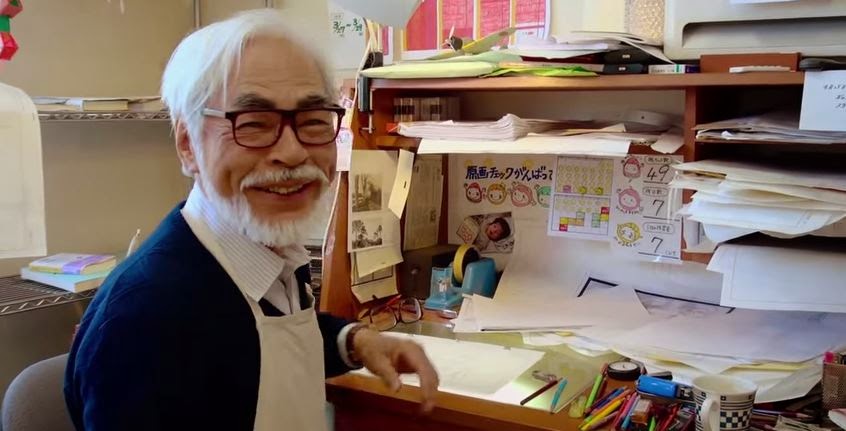 It's with a nostalgic bent the film was made. As if it were made for Miyazaki himself, to reminisce about what it was like to work at Studio Ghibli on his last film, and the historical context in which the film was released. It's a time capsule as much for him as it is the fans of his work. Instead of getting a complete sense of how the film was made, we get more a sense of what it's like to live in Miyazaki's world. Masakatsu Takagi provides a beautiful, Joe Hisaishi-esque soundtrack of gentle, serene piano music that perfectly accompanies the film. 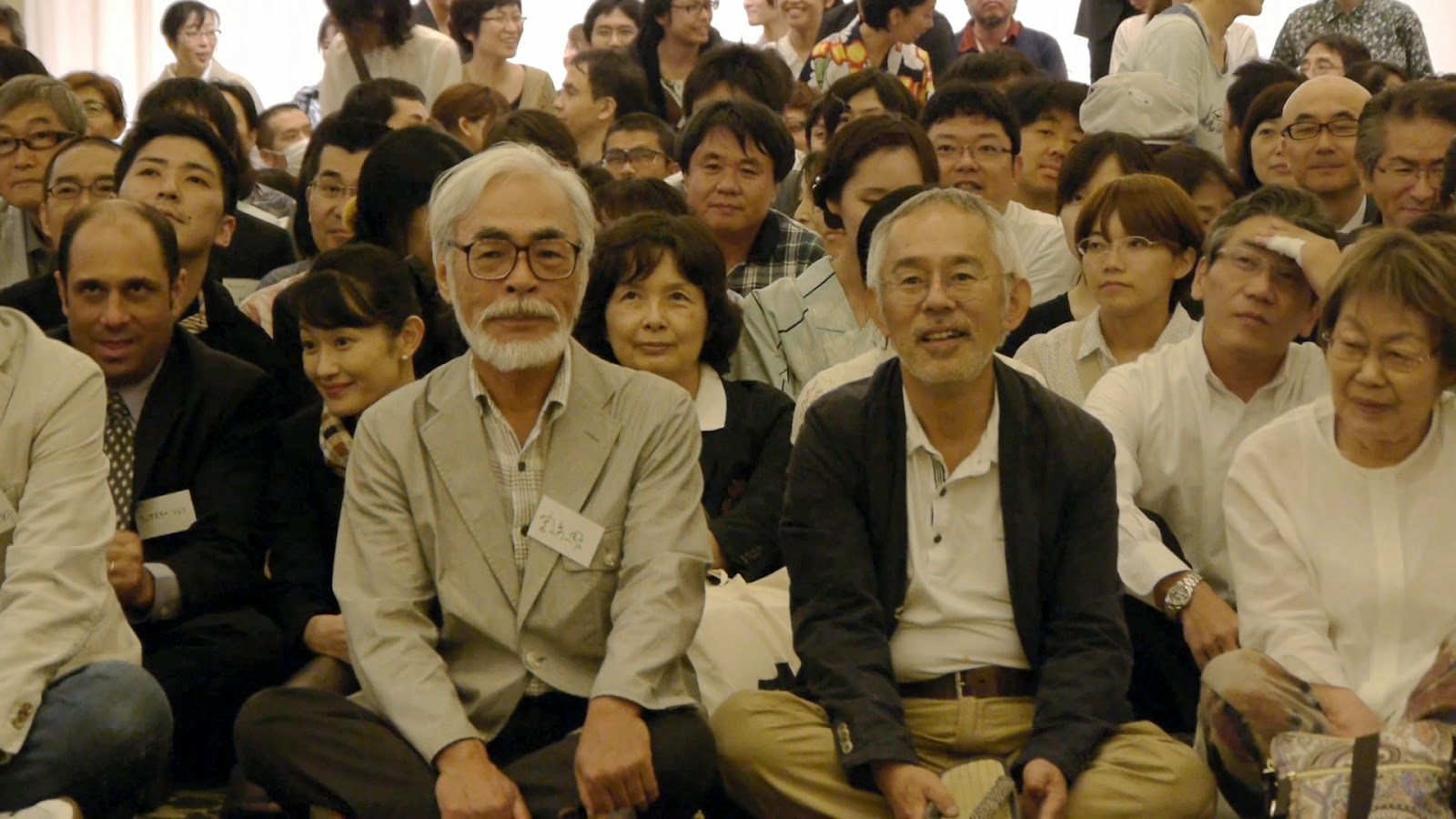 There is a powerful sense of sentimentality, and nostalgia to his films, especially to those who grew up watching them. Appropriately, The Kingdom of Dreams and Madness is a sentimental piece. Despite his, at times, curmudgeonly outlook on life, the pursuit of happiness, and his own work, there is an unquestionable sentimentality to which he heads to the end of his career and the unknown thereafter. He puts on music from his older films (by the aforementioned, brilliant Joe Hisaishi, who provided the music for his filmography) and quietly sings along. We are shown a mural drawn by an unknown artist combining characters from all of films. And the most important evidence is when he stands up after the first screening of The Wind Rises, having finished the film, and announces that it’s the first time he’s ever cried at his own film. So, much the way Miyazaki himself attempted to document the depression in his photo album, Sunada had attempted to capture the bittersweet moments during the making of his final film, and yet she wound up capturing life as usual. A portrait of a man who's life's work has now come to a beautiful close.

One of my favorite songs from the film:
Posted by Zach Owens
Email ThisBlogThis!Share to TwitterShare to FacebookShare to Pinterest
Labels: 2013, 4, documentary, Japan