Steven Spielberg is a great influence on every film fan. From Jurassic Park to Jaws, he's inspired a great many B movies. Ragnarok feels like a B movie combination of both Jurassic Park, and Jaws, with a hint of Indiana Jones tossed in.

Firstly, the word Ragnarok is loosely translated as "twilight of the gods," or the end of the gods. Those gods include (but are not limited to) Odin, Thor, Týr, Freyr, Heimdallr, and Loki (see the subtitle to Marvel's upcoming third Thor film). Sigurd Svendsen (Pål Sverre Hagen) is an archaeologist who has spent years researching the Oseberg Vikings, and recent discoveries have lead him to believe they are close to proving the myth of Ragnarok is real. He keeps a (grail) diary with many of his findings in it (a la Indiana Jones).
When his friend, and colleague Allan (Nicolai Cleve Broch) shows up with a rune stone providing the directions to an island known as The Eye of Odin, they know they're on the right track. It's surrounded by lake water cutting it off from the rest of the land around it, so that if you looked at a satellite image of it, it would look like an eye.

Sigurd is a single father, and his children, particularly his neglected daughter Ragnhild (Maria Annette Tanderø Berglyd) want to go on vacation. This new discovery grants him the perfect excuse to take his kids on a trip, even if it isn't particularly the one they want.

Of course, they find the things you might expect, like a piece of armor, and some skeletons, but the sheer number of skeletons leads them to fear what else they might find. There's even a line borrowed from Lord of the Rings, "this is no treasure chamber, it's a tomb!" (alright the first part is slightly different, but the ideas the same).
If Jaws taught us anything, it's that monster films are at their best when the monster is shown as little as possible. That holds even more true when the audience doesn't already know what to be looking for (unless you've seen a trailer for this film, in which case you're out of luck). Sometime's it's not always what you show, as much as what you don't show. It's a particularly good way to build suspense. Sandemose does his best to keep to this Spielbergian rule. But once we do see the creature, it's less than impressive. 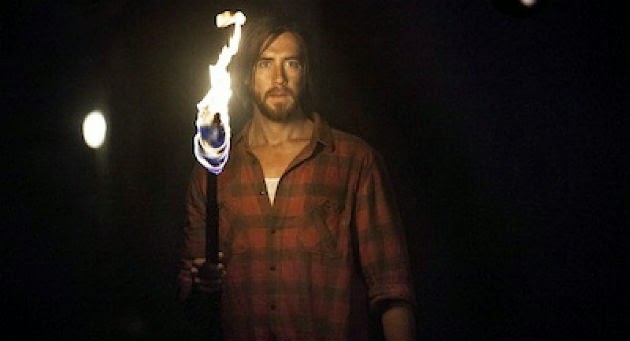 To their credit, they do try to infuse a family drama into the preceedings. Sigurd, having lost his wife, struggles to be the father his kids need him to be, and fending for their safety is his chance to step up. Also, the adult female of the group Elisabeth (Sofia Helin), aside from being perhaps the most physically capable of the group, hints that she might make a good mother. However, nothing in the way of a relationship between Sigurd and Elisabeth is formed.

The creature that's after them is given reason to pursue them when one character steals her egg. This might have been clever, if it hadn't been exactly what happened in Jurassic Park 3. In fact, knowing this cues us into what will happen in the climax. Both films attempt to make it parent against parent, and both play out in the exact same way. It is perhaps, better established in this film, but that doesn't make the ripoff any less blatant.

For a B movie, it has some nice cinematography, but lacks the thrills. It lacks the fun and depth of a film like Bong Joon-ho's 2006 film The Host (one of the best examples of a B movie, read my post about it here) As we know, imitation is the sincerest form of flattery. However, when your film does nothing else to set itself apart, it's hard to say it's worth the time to see. That's just the problem. Ragnarok has very little going for it outside of it's references to Spielberg films. And while I'm sure he's flattered, the rest of us are just bored.
Posted by Zach Owens
Email ThisBlogThis!Share to TwitterShare to FacebookShare to Pinterest
Labels: 2, 2013, creature, effects, monster, Norway