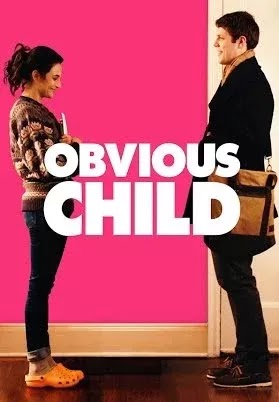 Romantic comedies are a dime a dozen. It takes a special one, or at least a different style to stand out. Obvious Child is a special one. It's an indie that's genuinely funny, and edgier than most.

Donna Stern (Jenny Slate), is a stand up comic, who works at a failing book store on the side. Or maybe it's the other way around? Donna's not any more certain than we are. The beginning of the film has Donna doing her stand-up routine, which involves telling the crowd intimate details about her life. Those details range from her underwear, to having sex with her boyfriend. These jokes set up the type of humor we're in store for throughout the film. The boyfriend, who was in the crowd, doesn't take it well, but it's just pilling on. He breaks up with her right after her she gets off stage, in order to date a mutual friend.

This leads to scenes of her dealing with the breakup in her own way. Worse yet, the book store is closing taking away her primary source of income. There's the typical scenes of drinking, and wallowing in bed, but she also takes the pain to the stage with her. She gives a painfully awkward, and unfunny stand-up all about her breakup. Shortly after that, she meets Max (Jake Lacy), who fortunately missed her stand-up. It isn't exactly your typical romantic comedy meeting. They are awkward together, but they make jokes and get along anyway. It's a more realistic meeting than your typical romantic comedy, which tends to either make the leads overly suave, or overly slapsticky. Max gets her attention by going along with her sense of humor. She likes farts, burps and potty jokes, and when she convinces him to pee in the street, his accidental fart, makes her laugh. 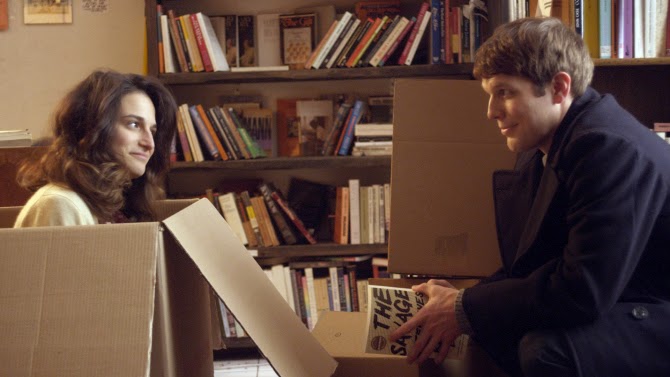 After they spend the night together, she realizes she's late, and makes an appointment with a clinic. After confirming that she is indeed pregnant, she's also told that she's too early, and will have to wait till Valentine's day to have the procedure. While she waits, she surrounds herself with her friends and parents. She also accidentally runs into Max over and over again. It seems pretty clear that he likes her, and wants to see her again. However, the film never descends into the typical romantic comedy trope of impassioned stalking, that we're supposed to think of as charming rather than creepy. They incidentally run into each other, and continue their awkward interactions. They both seem genuinely, pleasantly surprised by how much they enjoy these interactions despite how awkward they seem. But nevertheless, she does shy away from him while trying to decide whether or not to tell him.

While the film doesn't really question the morality of abortion, it makes it abundantly clear that Donna is not ready to have a child. Aside from her childish behavior, she's also in a bad place financially. She can't even afford the $500 for the procedure. Unlike what you might have expected from a romantic comedy involving this subject, we're never in suspense as to what she will do.

Slate is known for her role as the offensively annoying sister of one of the most annoying sitcom characters ever in Parks and Rec. Here she's almost as obnoxious, but far more likable. She gives an excellent, natural performance that makes her believable in both her emotional scenes, and ones where she's on a potty-mouthed rant. And those rants stay believable as a part of her personality rather than a comedic trope. If 30 is the new 20, then this 20 something is as mature as someone in their teens afterall. It's a unique opportunity for Slate to show off her range, and acting prowess. Lacy, on the other hand, plays Max as the low key guy in need of breaking out of his shell. A shell Donna is more capable of breaking. 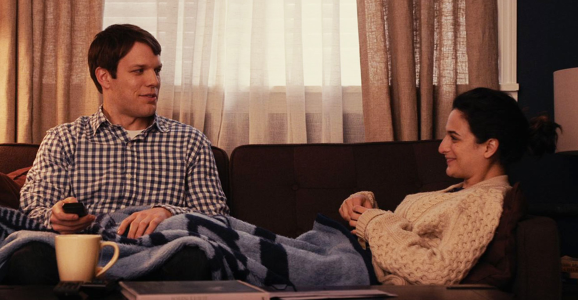 It's a very dialogue heavy film, particularly for Donna, but much of it is so natural it feels ad-libbed. There's also a lot of touching moments, particularly one in which Max stops to try to warm a package of butter in his hands before passing it on to her. It's such a simple gesture, but it helps to redefine for her what a good man can be, and what a good relationship can be. And yet, the sweetest, most intimate moment between the two is when he sits down to watch a movie with her, and he holds her hand.

It's a subject matter that could divide its audience, but Robespierre doesn't shy away from it. It's likely to hit home with plenty as well. One of Donna's friends tries to encourage her by saying, "you are unapologetically yourself on that stage, that's why people love you." This film feels "unapologetically real." The characters, the performances, and the way Robespierre navigates from start to finish makes this a romantic comedy unlike most others. Futhermore, it's a well written film that'll reignite your interest in this tired genre. We'll have to keep an eye out for her next project.
Posted by Zach Owens
Email ThisBlogThis!Share to TwitterShare to FacebookShare to Pinterest
Labels: 2014, 3.5, comedy, drama, great performance, indie