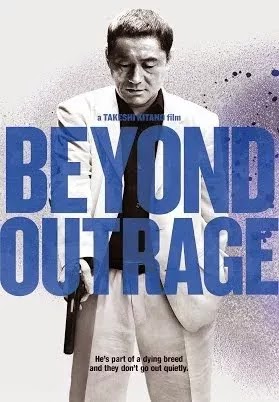 If you thought Kitano's gangster character Otomo from his 2010 Yakuza film Outrage was dead, you'd be wrong. Despite a stabbing to the gut, he's back for Beyond Outrage. A sequel that makes Outrage a more complete film.

In Outrage we saw a significant amount of plotting, and back stabbing, and violence. Lots of violence. It was a bloody power struggle that left Kato (Tomokazu Miura) in charge of the Sanno clan. All he had to do to get to power was back stab enough people. By the start of Beyond Outrage he's built them up so big, they're impossible to ignore for the cops and at least one other Yakuza clan. It certainly doesn't help Chairman Kato's case that several of his underbosses aren't too pleased that he named Ishihara (Ryô Kase), an outsider to the family (and the former second in command to Otomo, who he betrayed), his second in command.

Much like Outrage, this film involves lots of plotting, lots of people sitting around discussing things, and making threats if they feel their being slighted. I don't mean to make this sound like a negative, this intimate look at the inner workings of a Yakuza is interesting. Detective Kataoka (Fumiyo Kohinata) serves as the catalyst to all the goings on in this film. He's a self serving cop that wants promotions for dealing with the gangs. But he's also got back door dealings with these Yakuza in order to help influence the power struggles one way or another, in the hopes of rising in power and influence among them. 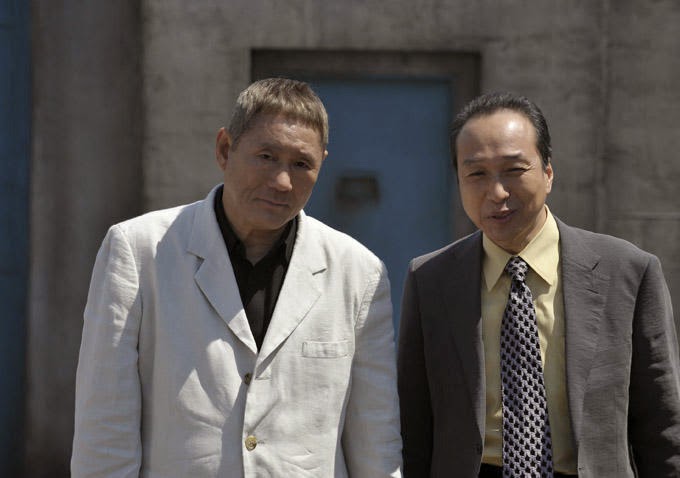 First, he tries to set up a meeting between a disgruntled underboss of the Sanno clan with the competing (but supposed secret ally) Hanabashi clan. However, once that goes south, Kataoka turns to Otomo. He gets him an early parole and arranges a meeting with his former enemy Kimura (who's face Otomo slashed in the first film). They make apologies and team up, then head to the Hanabashi clan for support in their fight against the Sanno clan. This leads to extended sequences of gun shots (mostly off camera) and dead bodies scattered across scene after scene.

It's a brutal movie in the sheer body count racked up by the end, but many (maybe even the majority) are killed off screen or in quick flashes of gunfire, which makes this one feel tamer than the previous film. What's difficult about this for the audience is that we aren't sure where Otomo and his new partner Kimura got their men, or who they're truly loyal to. And when it comes down to it, much of the second half of the film is nameless men gunning down other nameless men, and we're lucky if we can keep track of who's on which side. We have to wait a long time for anything of significance to happen to any of the characters we actually recognize. 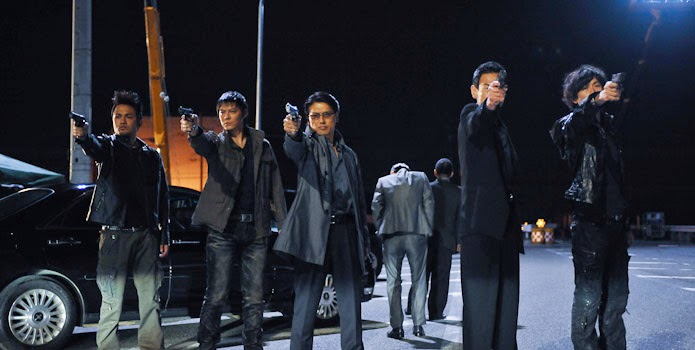 There just isn't enough characterization to go around considering the number of people populating this story. The few faces we recognize, and can put a name to (particularly Otomo, Kimura, and Chairman Kato), feel like they've taken a back seat at times. They rarely get in on any of the action.

If you combine Outrage, and Beyond Outrage into one, long movie, it tells an interesting tale of a crime boss who rose to power by secretly betraying everyone around him, but the few remnants that remain of the old crew rise up to tear him down for his crimes against the family. While that's an interesting story, when it's broken into these two parts, neither feels particularly strong without the other. Not to mention the fact that all the characters are murderous criminals with little, if any, redeeming qualities. It's hard to know who to root for, and you'd be hard pressed to bother caring about anyone. Mostly you'll just have to try to decide who you hate the most and hope they don't win in the end.

Despite my feelings about these two films, I love Takeshi Kitano and his body of work overall. He is a talent I'd like to see working more often, and in more varied genres. He's proven over his career that not only does he have a knack for Yakuza films (see Sonatine), but he can make a good comedy too (see Takeshi's Castle game show (better known in the states as MXC), and his wonderful, touching 1999 film Kikujiro). Beyond Outrage, and it's predecesor Outrage aren't bad films when put together, but they also aren't among his best work. Nevertheless his is a name in Japanese cinema that can't, and shouldn't be ignored. Let's just hope in the future he gives us more Kikujiro, and less Outrage.
Posted by Zach Owens
Email ThisBlogThis!Share to TwitterShare to FacebookShare to Pinterest
Labels: 2.5, 2012, Japan, thriller, Yazuka