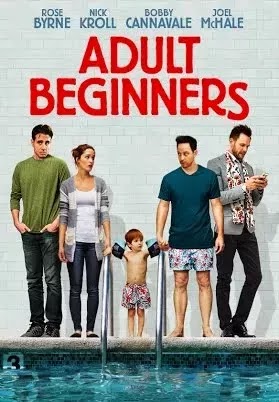 You know those times when someone tries to tell you a joke, or a funny story, but it really isn't all that funny, so you just feel awkward? Adult Beginners is full of such unintended moments.

It begins with Jake (Nick Kroll) throwing a party for the unveiling of his new piece of wearable tech, a Google Glass competitor. But the party is cut short when news breaks that there's a problem manufacturing an essential part for the device. With the devices failure, Jake loses his job, and becomes one of the most hated people in New York. To escape, he takes a train out to stay with his sister Justine (Rose Bryne), and her husband Danny (Bobby Cannavale), and their son Teddy.

The deal is that he can stay with them if he becomes Teddy's nanny. With little choice, he accepts. The job allows him to grow closer to his nephew, and his sister, but also reconnects him with the town and the house he grew up in.

It's structured much like a standard romantic comedy, even though this isn't a romance. Jake and his sister Justine reconnect, and become close, only to go through a period of separation before finding they need each other again. Jake finds he needs the structure of family to support him, and Justine finally gets the support taking care of Teddy she needs. 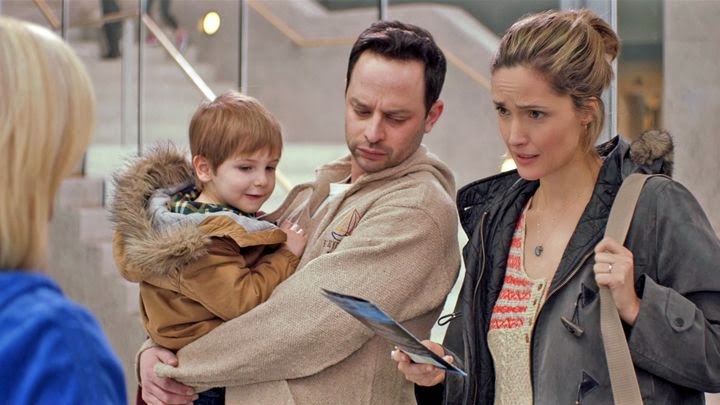 Justine had been studying law, but when their mother got sick, she dropped out and returned home to take care of her, and ended up never leaving again. She holds it against Jake that he didn't come back during the family's time of need. She also holds it against Danny that he's too busy with work to be around for her and Teddy. Danny isn't made out to be a bad guy, he clearly loves his family despite a few secrets that Jake discovers.

After the initial scene setting up Jake's failure, the film dramatically slows down. Scenes drag on, and many feel like they go nowhere. In particular, one strange scene in which Jake and Danny smoke pot, and blow the smoke out the window. Their conversation doesn't contribute much to a sense of character, or push the plot forward. The scene devolves into an odd moment where Danny wipes off a counter for an extended time, while they discuss how small Teddy's hands are. These moments are obviously meant to be humorous, but just aren't. 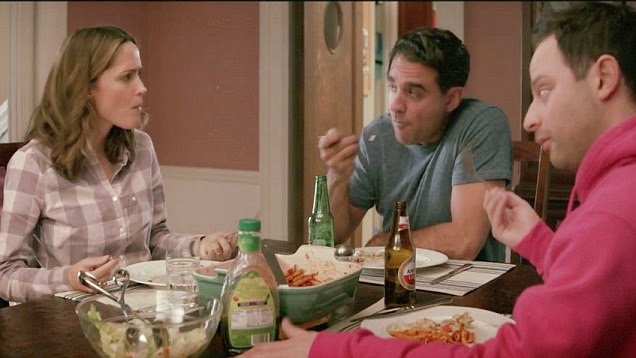 There's also a number of story elements that don't pay off in any way. It's consistently brought up that they are living in the neighborhood they grew up in, but aside from one of the few comedic moments they do nothing to make this element matter. And for a film where Jake becomes a nanny for most of the runtime, Teddy plays a relatively small part in the film.

It isn't a bad thing when comedians try to take on more dramatic stories. For the most part, the performances here are solid. In fact, there's one or two very good scenes with strong emotional resonance between Jake and Justine. However, solid performances, and some late dramatic tension can't save a film with such poor pacing, lacking direction, and a multitude of attempted comedic moments that fall flat. The plot points and dramatic moments are all too convenient, to the point where everything that happens in the film is expected. Jake's journey even takes him down the well tread road of having to decide between his new job and his family in their time of need.

It isn't as though they don't have a decent idea at the heart of the story, and talent behind the film. It features the acting talents of Nick Kroll, Rose Bryne, and Bobby Cannavale, but wastes comedic actors such as Joel MacHale, Jane Krakowski, and Jason Mantzoukas. The story was written by Nick Kroll himself. I'm never against seeing actors take on a different genre, but it seems dramedy writing isn't his strong suit.
Posted by Zach Owens
Email ThisBlogThis!Share to TwitterShare to FacebookShare to Pinterest
Labels: 2, 2015, comedy, drama