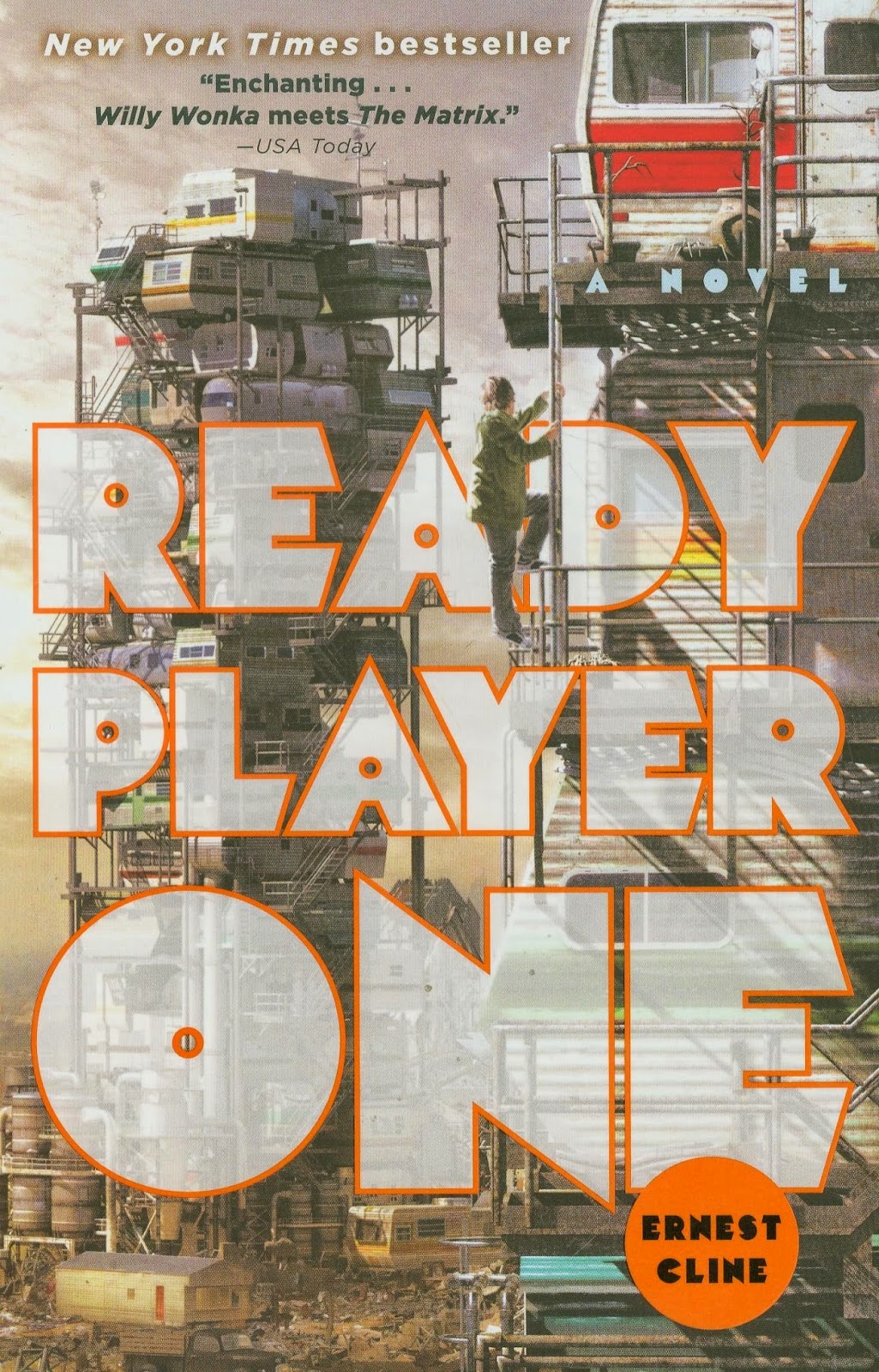 I finally got around to reading Ready Player One by Ernest Cline. This book has gotten a lot of positive word of mouth from a lot of people, but I'm not sure it's gotten a lot of honest word of mouth. I do like the book, and think it's worth reading, but there are some other things to talk about too. It is not perfect. References are cool, but too much is too much.

It's no surprise that so many people have so many positive things to say about it. It's for audiences who grew up playing video games and watching geeky movies during the 80's and 90's. It's an ode to video game culture, as well as a look into our possible future.

Anyone who has payed any attention to the upcoming virtual reality craze knows it's likely the wave of the future when it comes to, not just video games, but entertainment as a whole. For that, this is an interesting book. We get to geek out about the possibilities VR brings to our future.

In keeping with the dystopian future craze, this book features a somewhat bleak looking future. The real world is not an overly pleasant place, especially when you could spend your time in the OASIS, a virtual online paradise where people can escape the real world, do practical things like get their schooling, go to their day job, and when that's over they can visit virtual representations of the worlds present in pop culture fiction from Star Wars, to Firefly, to Lord of the Rings.

It's a place where your avatar can give you a whole new identity, because no one knows what you really look like. The implications of this are sadly not delved into very deeply, but it at least gets you thinking.

Like everyone else in the OASIS, Wade Watts (the main character, and our avatar into this world) spends his days chasing after a virtual Easter Egg that promises untold riches, and the keys to the world itself. The OASIS was created by James Halladay, and upon his death he informed the masses of the presence of three keys that unlock 3 gates that lead to his hidden Egg. Of course, discovering these things is next to impossible, and takes years of research and questing to find. To make matters worse the evil corporation IOI has unlimited resources to throw at the task, and everyone knows that nothing good could come of them being the ones to find the Egg.

It takes every last bit of pop culture knowledge to crack the case, and nothing is too obscure. And while that's fine for Wade and his compadres, who have the time to look everything up, and then somehow miraculously memorize every detail down to the letter, but for the average reader many of the pop culture references are likely to miss the mark.

It's a bit of a double edged sword, the references would have to be fairly obscure to make sense in the context of the story, but then again you can tell me that something looked or sounded like something from some obscure video game or TV show from way back when, but that isn't going to trigger the necessary images in my head.

On the one hand, it's cool and exciting to see a lot of geeky pop culture references, but eventually it gets to be too much, and starts coming off as lazy writing. Cline uses it as his crutch rather than explaining or describing things, he name drops a few references with a wink and a nod hoping the reader reciprocates. These references are meant to give us the mental images we should have. And while those references serve as nostalgia, few of them have any real impact on the story.

Being unfamiliar with more than a few of the references made, I found myself needing to consult Google to fill in the blanks for me. However, you aren't really supposed to think about it this way. You're meant to get caught up in the geeky nostalgia and for the most part I was, when I was familiar with the given reference.

The draw is the OASIS. The virtual world the characters escape in and live most of their lives in. It's a conceivable future with a lot of interesting implications. However, by the time you start to wonder about the those greater implications the story moves on to another set piece filled with the aforementioned over abundance of 80's references.

Wade is supposed to be the common every man, but unlike some of us, he has an encyclopedic knowledge of every song, movie, game (and their instruction manuals), book (novel, comic, manga, or otherwise), or TV show (or commercial), from the 70's through the 90's, from America to Japan, no matter how obscure. I remember reading many times that Wade had seen a movie, read a book, or played a game years ago and was somehow able to recall intimate details to help him with his current task. If only my memory were so good.

Wade is also supposed to be a young man just graduating school, yet the extensive list of geeky pop culture items he's experienced makes him seem like he should be much older. He states that he's played (and mastered) just about every game imaginable, read all the books by all the geek favorite authors, seen every episode of every TV show brought up, seen every movie (his favorites he's seen multiple times, including one he claims to have seen 157 times). Let's be honest, there are only so many hours in a day, and certainly for someone his age a decent number of those would be filled with school and sleep. Surely he, and his friends would have to have eidetic memories to recall all these things with such accuracy.

Despite this, I think it all works together fairly well, but there is a lack of depth that will leave some disappointed. I understand that this is a geek's dream come true, and it is an entertaining read. Anyone who has played a video game before will enjoy the OASIS, and the characters are enjoyable even if a bit flat. I found the dialogue poorly written at times to the point of wondering who talks like that? but that's a fairly minor gripe.

It's also being made into a film. The film rights were bought back in 2010 by Warner Bros, who hired Zak Penn to work on the script. One can't help but wonder how they'll handle all the references. Surely they'll be paying a large amount to acquire the rights to such a diverse range of pop culture material. Also worth mentioning for fans of Ready Player One, Ernest Cline is working on a sequel. And yes I'll be reading that once it comes out if that's any indication as to whether I enjoyed this book or not.
Posted by Zach Owens
Email ThisBlogThis!Share to TwitterShare to FacebookShare to Pinterest