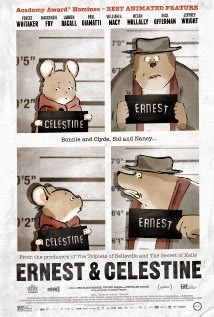 Ernest and Celestine is a humorous film that doesn't quite resemble the big Hollywood animated fare. No fancy CG or big budget style action sequences here. It's a French film based on the children's book series of the same name.

The bear's world up on the surface of the earth resembles what we humans are familiar with. However, the mouse world beneath the surface is a little different. Celestine, who fancies herself a bit of an artist, lives in a boarding house, and is studying to become a dentist. Dentistry is likely the most important profession available to a mouse. The head dentist shows Celestine how a mouse's teeth are responsible to building everything they have, and how a mouse who loses his incisors is useless to society and himself. So part of the student's duty is to go into the bear's world and bring back teeth, much like a tiny tooth fairy. These teeth will be replacements for any mouse who has lost theirs. 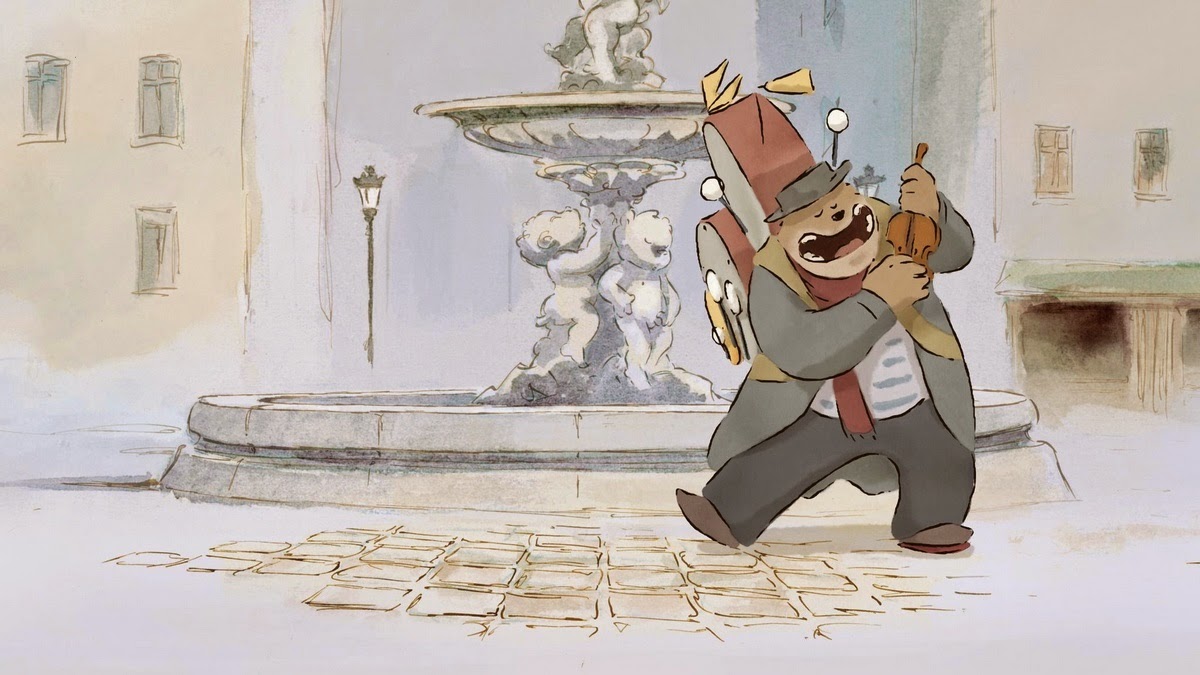 Ernest, on the other hand, is a bum. He lives in a small, mostly empty, shack all by himself. He goes into town to try to rely on the kindness of strangers, by asking for money or food with song.

There is a bear family at the center of the story that unwillingly supplies both Ernest and Celestine's needs. Real life married couple Nick Offerman and Megan Mullally do a great job supplying the voices for Momma and Pappa bear. Pappa bear, George, owns a candy shop where Ernest breaks in for food, and Mamma bear, Lucienne, owns a tooth shop across the street. It's a joint operation. Bears head to the candy shop and after some tooth decay from the sweet treats, they head to the tooth shop.

After meeting Ernest, Celestine is able to talk him out of eating her by helping him break into the candy shop. Later on, to settle his debt to her, he agrees to help her steal the teeth from the shop across the street. Both characters have run-ins with the other species by being in the wrong place a little too long. After turning to each other, and finding they only have each other in the world, a strong friendship is born. 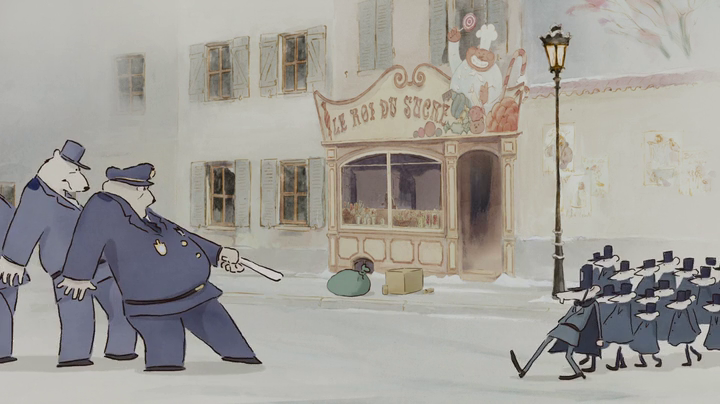 There are many funny bits here and there, but the main concept that both mice and bears don't really realize they're afraid of each other is the central bit of humor to play around with. There's one particularly humorous moment where both mice police and bear police give chase until running into each other. They both just slowly back away, back to the safety of their own worlds. Of course, parallels can be made to real world problems with perception of other races, and acceptance of people who are different from ourselves. It's a good moral for younger audiences and adults as well.

Despite the many chase sequences, the film has a serene Miyazaki quality to it. The animation has a distinct hand drawn quality to it that strikes a unique balance with the very detailed set pieces having been minimally drawn. It's a style that is very reminiscent of the pictures in children's books we all grew up on. 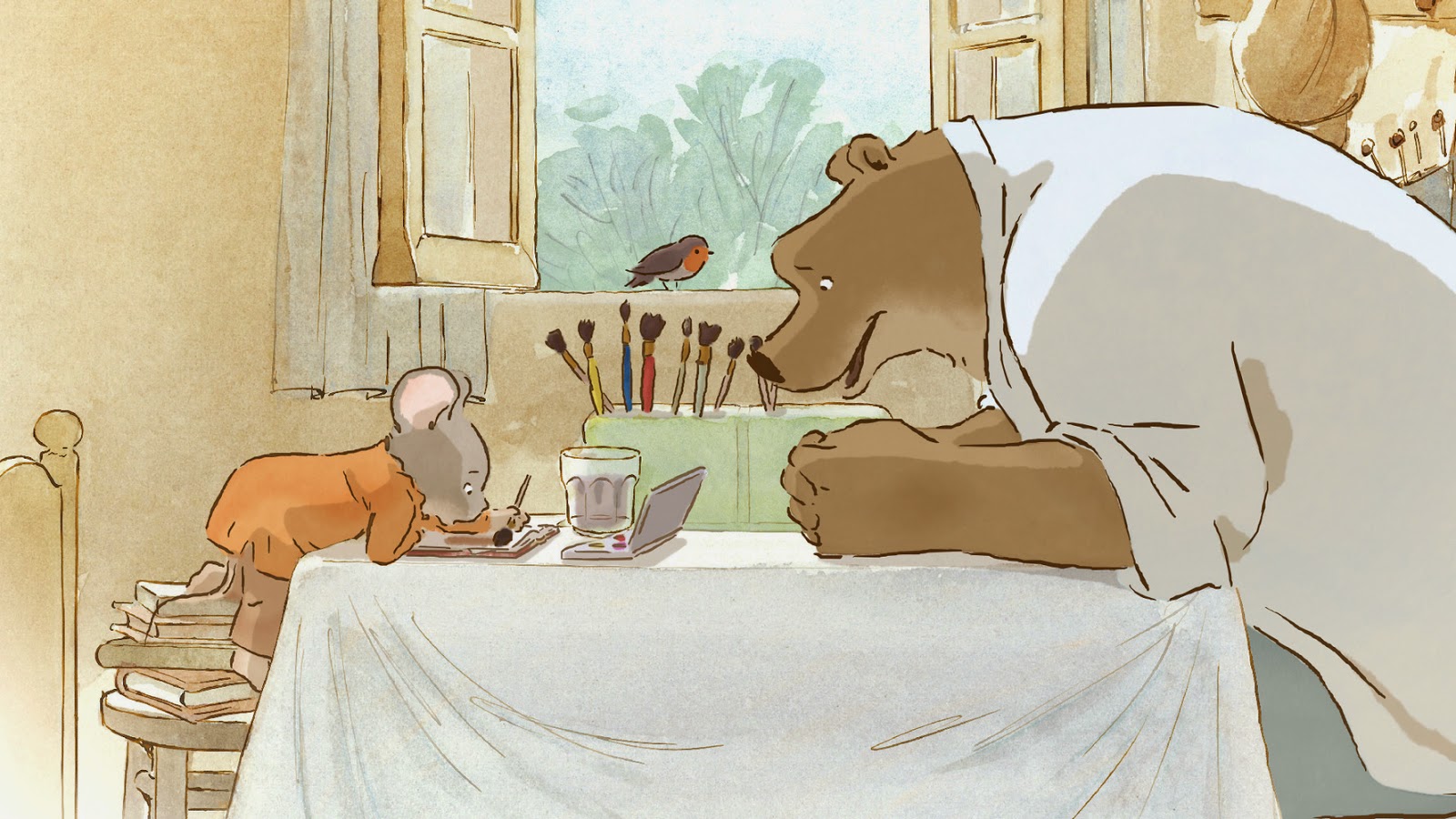 There is a sequence that involves both Celestine's art and Ernest's music that is beautiful and like nothing we get in your typical animated film these days. This is one that the adults will enjoy with their kids.

I should mention I saw the English version of the film that featured the voice talents of Forest Whitaker as Ernest, and Mackenzie Foy (who you may recognize from Interstellar) as Celestine. The rest of the cast is also fairly star-studded: Lauren Bacall, Paul Giamatti, William H. Macy, and Jeffrey Wright round out the cast.
Posted by Zach Owens
Email ThisBlogThis!Share to TwitterShare to FacebookShare to Pinterest
Labels: 2014, 4, animation, comedy, friendship