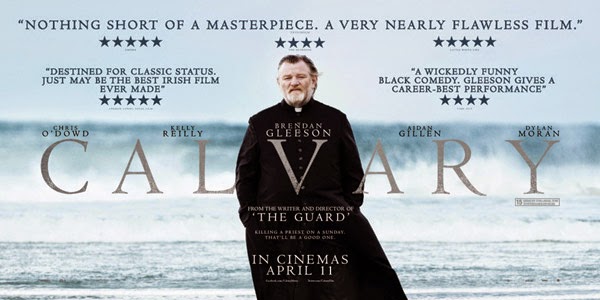 
I really liked John Michael McDonagh's 2011 film The Guard, which also featured Brendan Gleeson in the starring role, and proved McDonagh had a deft hand when telling a well balanced story between comedy and drama. Calvary is a different type of film, and it proves the range of both McDonagh and Gleeson. 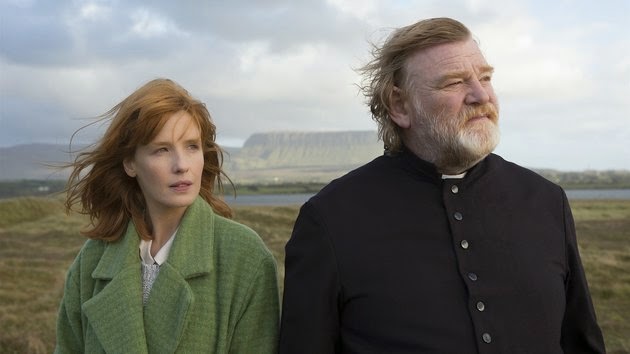 After being threatened while in confessional, Father James (Brendan Gleeson) spends a week doing his fatherly duty looking in on the unsavory people of his small community in Silgo, Ireland. People come to him with their problems, and he listens. He has to endure not just the crazy confessions these people make, but the abuse they give him, all while enduring the stress of awaiting his own death at the end of the week. The people confess but feel no remorse. Most people respect his position without necessarily respecting Father James himself very much, and treat speaking with him as if it's a required formality.

Father James came into his ministry after the death of his wife. The decision has caused a growing rift between him and his now adult daughter. The small community where they live knew Father James before he became a Minister, and that's partly to blame for their lack of respect for him as a person.

It's not really a spoiler to say that this film goes where expected (the title, and the opening scene give away the ending), but it's a satisfying film nevertheless. Father James takes on the sins of the community, and the sins of the church. We're given a beautiful tracking shot of all the messed up people in this community, that have just had their sins atoned for.

Father James performs his duty to the church and the people of the community with conviction, without any appreciation. We are left in a bit of suspense as to who threatened him in the first place, and as to whether Father James will leave, or expose the one who threatened him, but as a priest, he was more concerned for the soul of the individual.

The film is very well written and features quite a few recognizable faces. The one complaint being Aiden Gillen (of Game of Thrones fame) who grunted, growled, and snarled under his breath throughout his parts of the film. Brendan Gleeson, on the other hand, turned in one of the best performances of the year. If only to see some beautiful shots of Ireland and Gleeson's performance, Calvary is well worth seeing.
Posted by Zach Owens
Email ThisBlogThis!Share to TwitterShare to FacebookShare to Pinterest
Labels: 2014, 4, drama, great performance, indie, Ireland