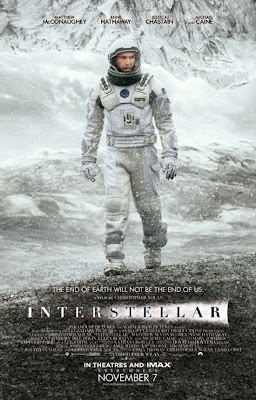 In the future, due to extreme, widespread drought, Earth has become a dust bowl, obviously inspired by 1930's depression era America. Farming has become the most important profession, but growing crops is becoming less and less possible. Corn is about the only thing left that will grow. Humanity is slowly starving. Cooper (Matthew McConaughey) is a farmer trying to take care of his daughter Murph (Mackenzie Foy), and his son Tom (Timothée Chalamet). He formerly worked for NASA, but they've been shut down while the government attempt to put their money to better use.

Murph believes there is a ghost living in her room because strange things happen there. Occasionally books will be knocked off the shelf onto the floor, and she thinks she hears Morse code, but she can't convince Cooper that someone or something is trying to communicate with her.

When a bad dust storm comes and Murph forgets to close her window, Cooper finds a message in the dust on the floor. The message is coordinates, which once followed allows him to find NASA's hidden, underground base of operations. Apparently they've been working in secret to find a way to save humanity by leaving their dying planet. 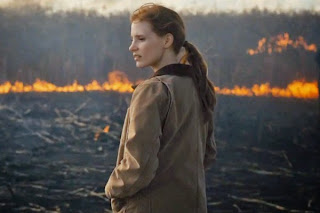 Once Cooper shows up, Professor Brand (Michael Caine), the leader of the project, takes the opportunity to recruit him to pilot a mission that would take them through a wormhole they found out by Saturn. The wormhole leads to another galaxy in which there are three planets that could potentially support human life. They've already sent out three astronauts to investigate the different planets, but they haven't heard back from them. This mission, likely their last hope, would be to find and rescue the others and determine if one of the planets could be their new home. If so, they have two options, plan A would be to return to Earth, where Professor Brand is working to solve the equation to gravity allowing them to lift off an immense space station they could use to transport humanity to the new world. Having failed that, plan B would be to use embryos they have on-board to raise a new human civilization.

I'll stop there, because anything beyond that would enter spoiler territory.

Nolan was inspired by Theoretical Physicist Kip Thorne, who worked as a consultant throughout production of the film, and his work on the film lends plausibility to much (although not necessarily all) of the science.


"To creating the wormhole and black hole, Dr. Kip Thorne collaborated with VFX supervisor Paul J. Franklin and his team at Double Negative. Thorne provided pages of deeply sourced theoretical equations to the team, who then created new CGI software programs based on these equations to create accurate computer simulations of these phenomena. Some individual frames took up to 100 hours to render, and ultimately the whole CGI program reached to 800 terabytes of data. The resulting VFX provided Thorne with new insight into the effects of gravitational lensing and accretion disks surrounding black holes, and led to him writing two scientific papers: one for the astrophysics community and one for the computer graphics community."  -Factoid from IMDB

I always appreciate Nolan's attention to detail and his attempts to ground his stories (even the Batman franchise) in reality. However, there are still plot elements that will leave you scratching your head. Some of these will be because things are left vague enough that you can debate the finer details with friends, while others are simply plot holes that leave things open for criticism. 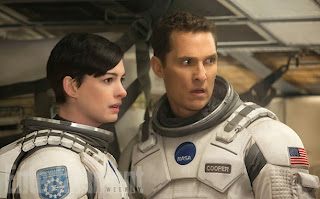 For a film that does try to get the science right most of the time, somehow having Cooper be the best pilot never translates into seeing him calculate trajectories. He's more of a space fighter pilot, the way we'd expect to see in fantasy sci-fi. So while most of the time they try to base things in real science, Nolan takes liberties, and I don't fault him for that because it is science fiction. Rather I credit him for a sci-fi film that perhaps sticks closer to real science than other sci-fi films.

The cinematography by Hoyte Van Hoytema (who worked on last year's Her) is beautiful. For the most part they try to keep our point of view from becoming a "God's eye view," although there are some wider shots here and there. Nolan and Hoytema want us to see the events from the ships, or from a human's perspective. All of the spectacular visuals are, of course, complimented by a beautifully moody score by Hans Zimmer, that sounds decidedly different from other Zimmer/Nolan collaborations. 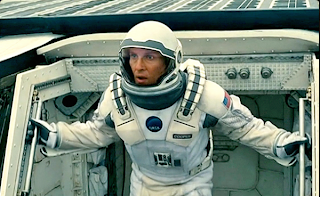 There is also an emotional layer to the film that many are responding to. It's perhaps Nolan's most personal film. I'm not a parent, so this film didn't hit me quite as much as it will for those who are parents. At the heart of this film is a family drama. You don't see a lot of father/daughter stories, we get plenty of mother/daughter, and even father/son stories, but here we see a loving father trying to make difficult choices to save his daughter, and for the most part missing out on life spent with her. The only problem I have with this is that the son is largely forgotten. Cooper does have two children, and seems to have a good relationship with both, but clearly this film is about the father/daughter relationship. I don't want to spoil too much, but there is a point where the son is completely forgotten, and we never find out what happens to him.

Make no mistake, Interstellar is not a perfect film (it's probably not even the best Christopher Nolan film), but there are plenty of things to stop and think about, some things work, some things don't. One way or another, this film is an event. Probably the number one must see film of the year. It leaves a lasting impression that will make you think for days and perhaps even weeks after seeing it. It makes you think about the bigger picture that is the universe, questioning humanity's small existence. It's also a visual spectacle that will blow you away on the big screen. It's a conversation starter that will be fun to debate with your friends, and you will want to be in on this conversation.

For further reading, here are some of the things that bothered me about the film, most notably number 21 on the list I've linked below (these are the things I didn't really want to spoil here):
- Why Scientists Are In A Love Hate Relationship With 'Interstellar'
- 21 Things In Interstellar That Don't Make Sense 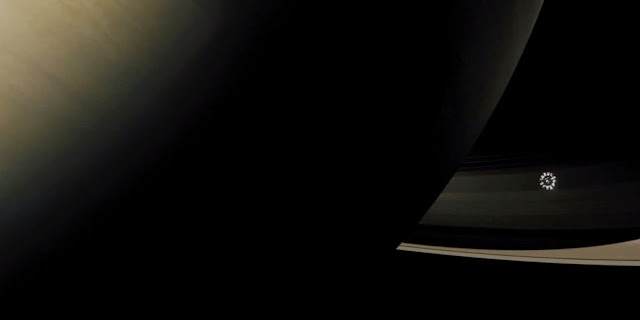 Also as just a sidenote:

You could argue that Sci-Fi is already fairly mainstream, but I'd argue it's still something of a niche genre. The last few years has seen more and more blockbusters delving into the Sci-Fi genre (just look at Tom Cruise's last two films: Edge of Tomorrow, and Oblivion). This is perhaps the year that Sci-Fi becomes main stream. As many fans of Sci-Fi are out there, it's still one of those genres considered more for geeks. Yet with films like Guardians of the Galaxy (a fun fantasy blockbuster) and Interstellar (a blockbuster more set in reality) the box office numbers for these extremely different space faring films are exceptional.  As a fan of Sci-Fi stories, I'm excited by the prospect that studios could be more willing to make films in the genre. Now, Nolan has reached a level of critical and box office acclaim to the point where he can basically do whatever he wants, but the hope is that instead of constantly seeing sequels number 5 and 6 or remakes of old movies and TV franchises we could see more film studios willing to take a chance on original films.
Posted by Zach Owens
Email ThisBlogThis!Share to TwitterShare to FacebookShare to Pinterest
Labels: 2014, drama, effects, family, mind bending, sci-fi, space, thriller