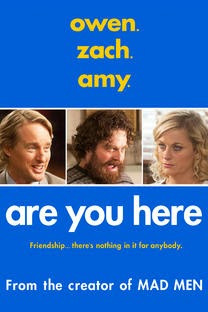 On the outside looking in this seems like it should be one of the great, can't miss comedy films of the year. It's not. It's Matthew Weiner, the writer on hit shows such as The Sopranos, Mad Men, and Fargo, making his feature film debut. Those shows are not comedies, so it's possible that comedy just wasn't the right genre for Weiner. However, he puts together something of an all-star cast with Owen Wilson, Zach Galifianakis, Amy Poehler, Laura Ramsey, plus appearances by recognizable TV stars Jenna Fischer (The Office), Melissa Rauch (Big Bang Theory), Lauren Lapkus (Orange Is The New Black) and Alana De La Garza (CSI, Law & Order), and even a cameo by well respected director/actor Peter Bogdanovich as the judge. Matthew Weiner only wishes this film could be mentioned in the same conversation as some of Bogdanovich's films.

At the start it's not that bad. There is some decent humor, but at some point you realize that it isn't really going anywhere, and none of the character's motivations are clear. And eventually things fly off the rails.

Steve Dallas (Owen Wilson) is a weather anchor at an Annapolis TV station. I say "weather anchor" because he isn't a meteorologist, he is told upfront he only has the job because he's good looking and speaks well on air. Lauren Lapkus' character is the behind the scenes meteorologist who makes the weather report, but isn't considered attractive enough to be on air. There are many such side stories for characters that don't matter and have no bearing on the central storyline. Sadly neither the side stories or the central story are done particularly well.

It begins as more of a buddy comedy between the Owen Wilson character and the Zach Galifianakis character, but eventually it seems desperate to turn romantic comedy between the Steve (Wilson) and Angela (Ramsey). Ben (Galifianakis) is distraught after learning his father has passed away. Steve, his family friend growing up, takes him back to his home town for the funeral. It's a small town as we can tell, because all the local stores close down for the day of the funeral. There is some small town related humor, and some TV news station humor as well (Steve makes a comment about how he would demean whatever it is his producer does if he knew what his job entailed. This is comically the way people behind the scenes feel about the on air talent, they have no idea what anyone behind the camera actually does).

Steve (Owen Wilson) is a womanizer who sleeps around with many women over the course of the film. He’s also a bit of a pervert who spies on his attractive neighbor when she’s changing, and shockingly she seems completely fine with it when she catches him in the act. Having grown up with Ben as a family friend, Steve is perhaps the only person that cares for and looks after Ben, however he is also a bad influence on him. Steve is a druggy who takes any opportunity he can to “celebrate,” and often makes Ben "celebrate" with him even when he doesn't seem to want to. 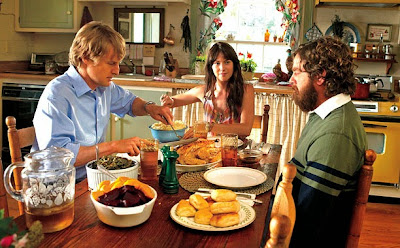 Angela (Laura Ramsey) is the slutty gold digger the father married before dying, at least from the family's perspective. Terri (Amy Poehler) hates her, and believes that she was only with her father in order to get in on the will upon his death. However, the fact that she sticks around after he dies, and helps with Ben’s plans seems to indicate that she is a more genuine person that Terri believes her to be. We don't really understand why these people do most of the things they do, but Angela is particularly tough to figure out, and as a result she really doesn't feel like a real person.

The father leaves everything to Ben with the hopes that he can learn responsibility and grow up. Ben takes it as his father’s dying attempt to control him. He resents the fact that everyone, his father included, thinks he’s crazy and wasting his life. For a while, Ben plans to change the world, and create his own ideal society. Eventually that plan is forgotten after Ben, having been diagnosed with bipolar disorder, starts taking medication that make him "normal."

The only things we do know is that Steve needs to give up the drugs and his womanizing ways, Ben needs to seek mental help, and Terri wants to have a child (a thread left hanging). About the only thing carrying the film is the possible romance (if you can call it that) between Angela and Steve, and even that doesn’t feel genuine. I really never cared whether they’d hook up or not, especially after one scene in particular that felt completely out of nowhere, and completely out of character for those involved. 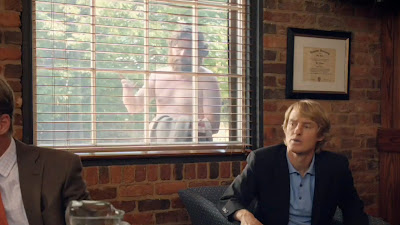 We never know why Ben wants to give the farm to Steve, or for that matter why Steve wants the farm, he clearly has no idea how to operate a farm or deal with animals. We don't know why Angela sticks around or helps the family that, at least for a while, clearly hates her. And Amy Poehler is completely wasted in this film. Her part is relatively small and neither funny nor dramatic. And Jenna Fischer (The Office) shows up later in the film as a single mother who is all too trusting of Ben, the stranger she has just met. She allows him to watch her child while she walks away to talk on the phone. In this day and age, no one would willingly leave their child with a strange man they know nothing about, and have no reason to trust.


After a somewhat promising start the film it turns into something that feels almost like satire making fun of the typical romantic comedy, but it obviously isn't intended to. There is even the stereotypical scene in which Steve and Angela have their first kiss in the rain, and of course it happens long after we've stopped caring whether they fall for each other or not.

It isn't as though this team of director/writer and actors couldn't work. Again, on paper this should be a great comedy, but it just isn't. Perhaps they'll give it another shot in the future, and make something truly great, but I can say, without a doubt, that you should skip this one.