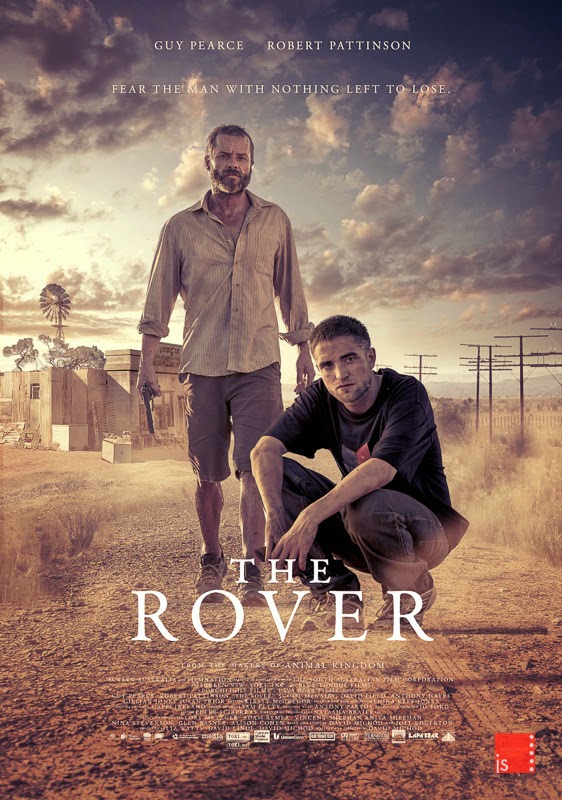 Set in the Australian outback “10 years after the collapse.” While the movie doesn’t really offer anything more than that, IMDB tells us that it’s a global economic collapse. Despite this collapse, most people seem to still have cars, so apparently there is still gas plentifully available. We see signs of some sort of local law enforcement, and some people who look to be in a military of sorts, but in every other way this looks to be the wild west.

Eric (Guy Pearce) stops in for a drink at a bar. The scene is broken up with abrupt shots of a gang fleeing the scene of a gunfight (and some unknown crime). One of them pleads with the others to go back and get his brother, apparently left behind after having been shot. They refuse to go back. The squabble causes them to swerve and crash their truck. It rolls and ends up back on four wheels but stuck on a pile of wreckage. In need of a quick getaway, they pile into Eric’s car and drive away as quickly as possible. Eric, not willing to let them get away with stealing his car (which we assume holds something of value to him somewhere inside), jumps in their abandoned truck and frees it from the wreckage. He pursues, but when they stop to find out what he wants, it’s all too easy for them to knock him out with a blow to the back of the head. 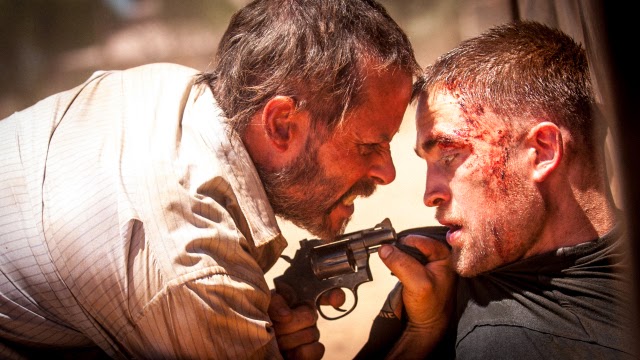 When he wakes, up he continues his pursuit. He stops to buy a gun, and while he’s inside buying it, the brother that had been left behind, Rey (Robert Pattinson) shows up. He recognizes the truck, but not the person using it.

After admitting that it belongs to his brother, the gang's ringleader (played by Scoot McNairy), Eric takes Rey captive demanding that he lead him to his brother (likely where Rey wants to go anyways). At first it isn’t clear, but Rey is a halfwit. The danger of a character like this, and Pattinson’s portrayal really flirts with the line at times, is that it could easily go into “Simple Jack” territory. Fortunately, Pattinson reins it in just enough to keep it from going that way. There is a truth to the way his portrayal of Rey fights the pained struggle to articulate his thoughts and feelings into words. 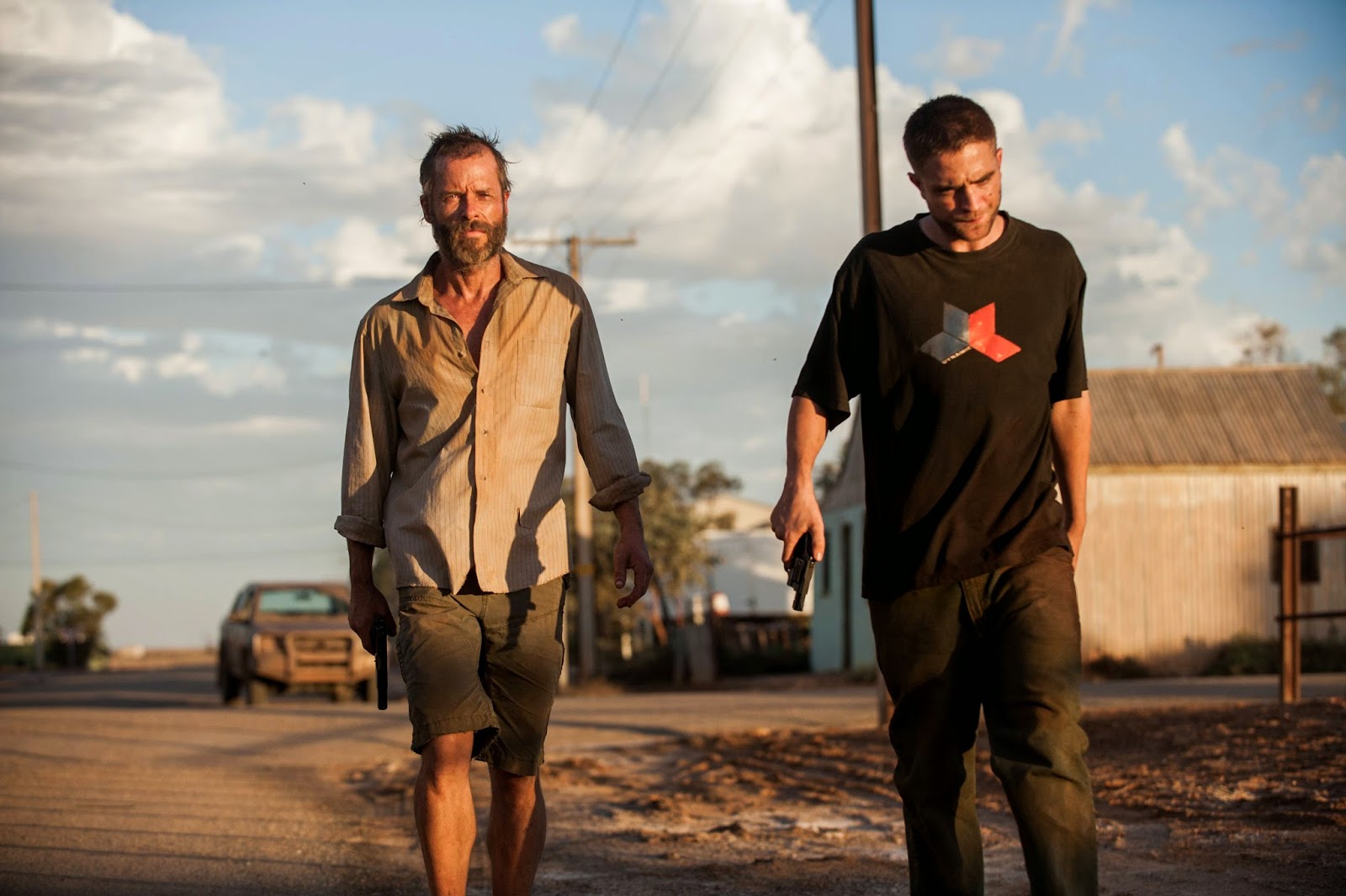 Since they both have the common goal of finding Rey's brother, they both help each other out of one mess after another along the way. Rey obviously needs Eric, and Rey, much to Eric’s surprise is willing and able to get him out of a jam as well. It’s an uneasy bond formed out of journeying through tough circumstances.

It’s a tense film, and yet it’s like a slower, more moody and atmospheric Mad Max (if that’s possible). Everyone is bad to some degree here. The bad guys that stole Eric’s car are bad, and yet our main character Eric, as we learn, is bad too, but we can tell there are shades of good in them too. At least Eric seems willing to live by some kind of code.

Eric, through his own evil acts, realizes that the world is no longer a pleasant place. IF there is such as thing as the law in this world, they no longer care about justice or civility. That’s why Eric follows the thieves in the first place (although we find out he has more reason than just that). He isn’t willing to give up on the idea of civilization entirely.


“You should never stop thinking about a life you’ve taken. It’s the price you pay for having taken it.”

It’s clear that Eric carries the weight of having taken several lives.

Having befriended Rey, looking after him becomes part of his code. He’s likely the only friend in the world he has left. For Rey, his brother left him behind in his time of need. Eric is likely a better friend than his brother ever was to him. 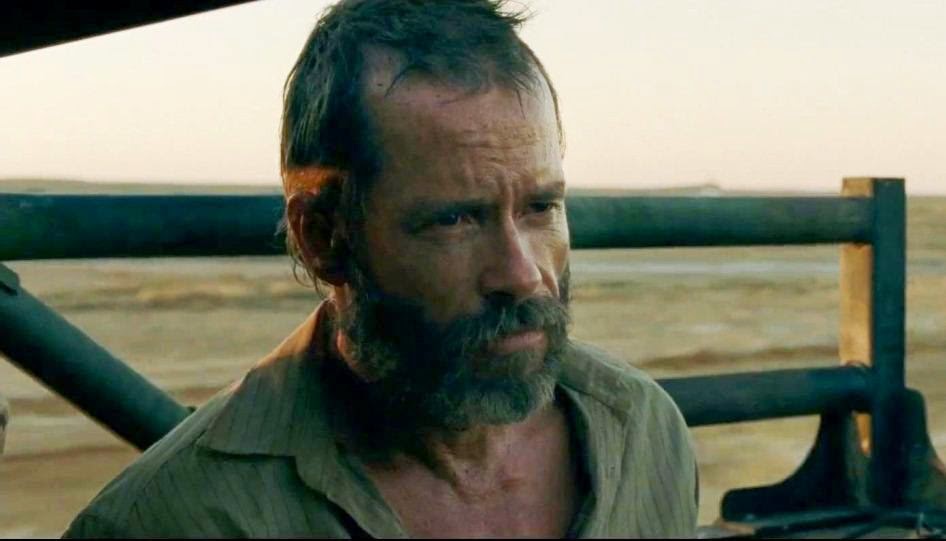 The slow camera movements, atmospheric music and otherwise minimalist filmmaking turn this into a strong well built world. Guy Pearce gives a perfectly minimalist performance, most of it in his character’s look, which very likely was as simple as having him not shower while out in the desert for a month. It lends plausibility to the characters, who have hardened to the conditions. He plays Eric as a character still coming to terms with the state of things, and trying to teach Rey the new ways of the world. It’s clear that it’s a brutal world, and we are glad we don’t have to live in it.
Posted by Zach Owens
Email ThisBlogThis!Share to TwitterShare to FacebookShare to Pinterest
Labels: 2014, 3.5, action, friendship, post apocalyptic, thriller