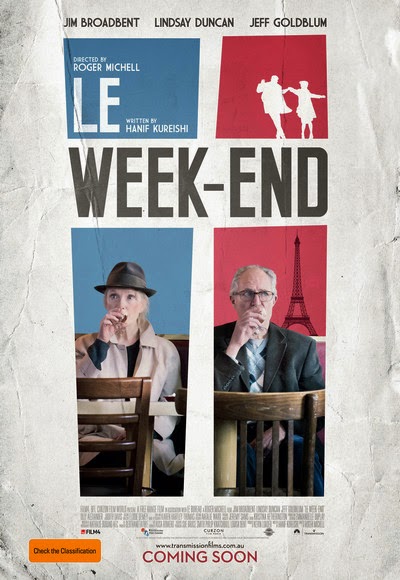 This film technically came out toward the end of last year, but hadn't really expanded to the US until earlier this year.

Le Week-End is a couple's attempt to "recapture the magic" by spending the weekend celebrating their anniversary in Paris, where they spent their honeymoon some 30 years ago. Sadly, as we know all to well, you can never really "relive the glory days," so to speak. Just as you can never go back in time, you can never make things the way they used to be. And worse yet, several decades worth of frustration and pain can never really go away.

During this trip, Nick tries to bring up the important issues in their lives, further breaking the escapism Meg so desperately wants. Nick questions her about her preference for the new bathroom tiles, and they argue over whether or not to allow their struggling son and his family to move back in with them.

This trip seems entirely his planning, and she begrudgingly enjoys it along the way. But if she is going to be there she is determined to enjoy herself in her own way, even if it means changing hotels to a more expensive one that they really can't afford.

They fight and squabble over little things and laugh at each other the way real couples do, but it's also clear that they always care for each other. He even allows her to pick the restaurant and doesn't complain when she can't seem to make up her mind. "Too modern, too empty, too touristy..." she complains, before finally settling on one.

She says, "you always did edit out the arguments and misery."
To which he replies, "You can't not love and hate the same person. Usually within the space of five minutes, in my experience."

Nick wanted the trip for several reasons, firstly because he wanted to celebrate their anniversary, but also because life back in their hometown, of Birmingham, is becoming less pleasant. He's being forced to leave his job, and needs to get away.

Nick wants Meg to make physical love to him, but she's never really in the mood. "I might do it for you later if you stay awake" she tells him. The film shows us there is much more to love than physical love.


"There's more to love than loving or being loved."

She tries to encourage him that it isn't too late to reinvent himself and find a new career path, but he knows it wouldn't be easy at his age.

They both waffle from being right on the verge of leaving the other, to not being able to be apart from them for more than a few minutes. They still find ways to have fun. "Chase me!" she says, and of course he does. Their difficult financial situation prompts them to dine and dash a number of times. Age doesn't matter much when you're in love. Whether it's the spontaneity of their trip or not, they both seem willing to act like kids.

They run into an old college friend of Nick's, Morgan (Jeff Goldblum), who is a more successful person when it comes to money, although he's experiencing something of a post midlife crisis. He's relocated to Paris, found a new wife, and has a child on the way. Nick sits down with Morgan and they discuss the topic of love and Nick questions how he could possibly try to start over in love, marriage, and children. Clearly Nick could never undertake such a life change. 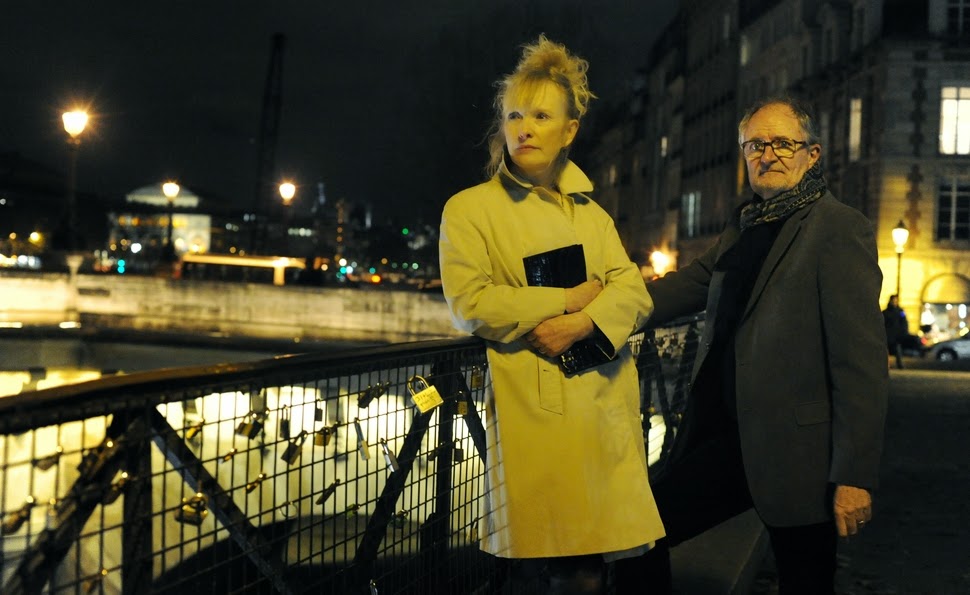 Nick admits that he could never be with someone else. "I only like her," he says.

Despite their obvious love of each other they continue to fight. These fights tend to bring them to the breaking point, including one in which he accuses her of being unfaithful. As a young person you start to wonder whether things will change or get easier as you get older, when it comes to relationships. This film shows that they're always hard, they always require effort, and even in older age you can fight over the sorts of things young people fight over. However, even if things don't necessarily get easier, relationships are the most beautiful thing in the world.

These two, as couples do, have grown and show signs of wear and tear. They've become warped enough together that they fit each other the way no one else can. They realize that they wouldn't be happy apart, and wouldn't quite know how to survive without each other.

"I can't bare to be apart from you." He says.
"You are pathetically dependent." She says.

There's a touching scene in which she complains about him, but while she sleeps he goes and sits on the balcony to listen to music while enjoying the view. When she wakes up she can't find him. She was afraid he'd left her. When she finds him she asks him to hold her. It's proof that whether we complain about the one we love or not, we can't stand to be without them. 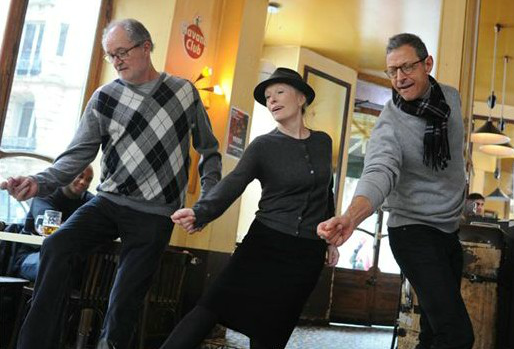 They watch the Madison dance scene from Jean-Luc Godard’s Band Of Outsiders (an obvious inspiration) and later, in the spirit of youthful fun recreate it in a diner.

Le Week-End is a humorously touching and honest portrayal of love and marriage.


"When Michell is on his game, as he definitely is with "Le Week-End", he unearths small, invaluable and even profound truths about the human condition that are often as inspiring as they are devastating." - Susan Wloszczyna, writing for rogerebert.com

It's reminiscent of Richard Linklater's Before Midnight (as well as it's predecessors) which were also a great reflection on falling in love and growing older together. Those films feel very true when it comes to the relationship Linklater built between the two main characters. Le Week-End feels like it could have been the next chapter in the "Before" series.

Both Jim Broadbent (who I liked a lot in Cloud Atlas) and Lindsay Duncan (a veteran of the small screen) are outstanding. Like the "Before" films, this story follows the couple as they talk about anything and everything. Good performances are a must for this type of film, obviously, but the writing matters as well.

Fortunately, most of it works in Le Weeknd-End. Only one scene stinks of having been overwritten. It just so happens to be the climax of the film, so it's unfortunately a glaring mark on the film, but in every other way the film is pitch perfect.

It's one of the films that made it's way to Netflix this month, and it's definitely worth checking out.
Posted by Zach Owens
Email ThisBlogThis!Share to TwitterShare to FacebookShare to Pinterest
Labels: 2014, 4, comedy, drama, romance