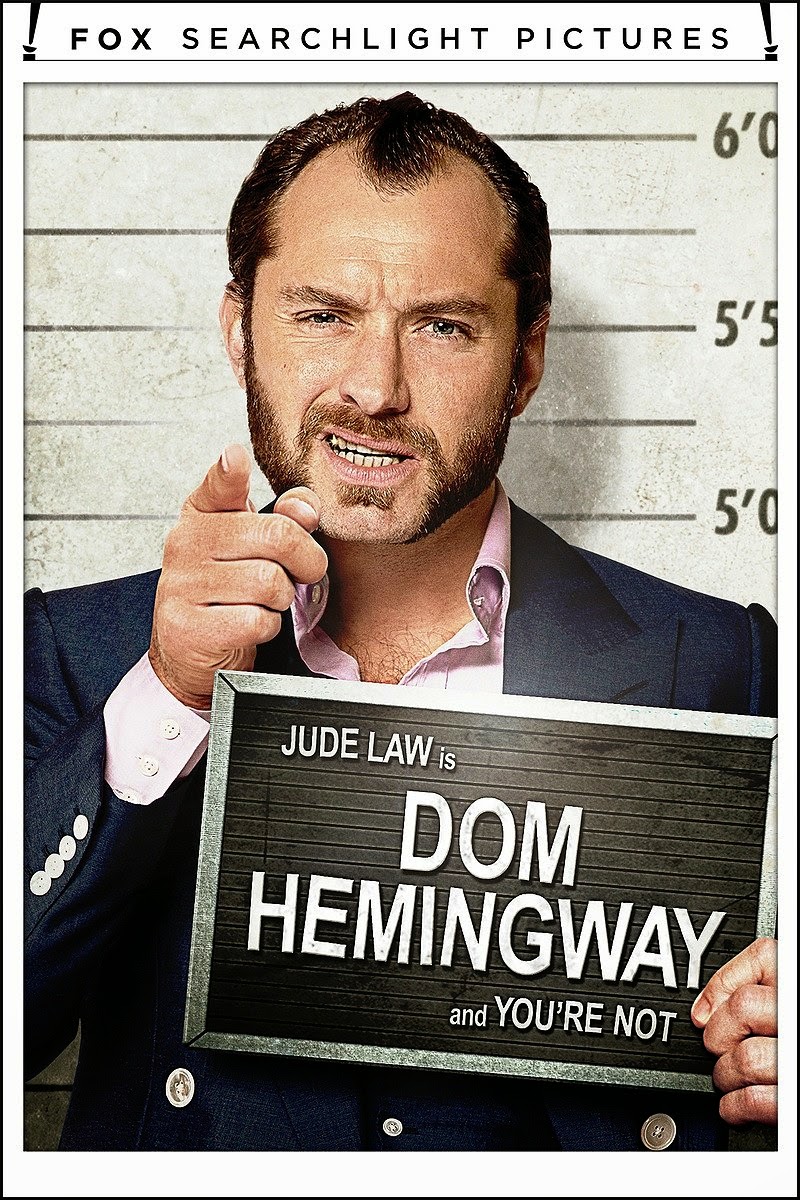 Dom Hemingway is a somewhat under rated film that came out toward the end of last year in the UK, and saw a limited release in the US in April of this year.  As a result of its limited release here in the states, it's also likely an overlooked film. It's seen fairly mixed reviews, and it's one I can see being on either side of.

It has a pretty off-putting opening, with Dom (Jude Law) in jail being "serviced" during a conjugal visit going on and on about his impressive "gentleman sausage."  We find out he's been in jail for 12 years for keeping his mouth shut over a theft job.  He's a notorious safe-cracker, who's in love with the sound of his own name.  After 12 years, he's released to find out that everyone seems to have forgotten his name, and he's upset over the fact that his boss Mr. Fontaine (Demian Bichir), a dangerous crime lord, isn't paying what he feels he's due for the time he served.

In those 12 years Dom served, his wife died after leaving him for another man, and his daughter grew up hating him.  He goes to Mr. Fontaine and demands more money.  Fontaine graciously gives him the money and they all party for several days before a car accident cuts things short.  Fontaine's girlfriend turns out to have been playing them all. She steals Dom's hard earned money leaving him penniless.

As a result he has to turn to his estranged daughter Evelyn (Emilia Clarke of Game of Thrones fame). He finds out that she is married and has a child. It's just a reminder of how much time has passed while he was away, and how much in life has passed him by.

He tries to get work, and re-establish his name, but it turns out he is a very unlucky man.  Nothing seems to work out for him.  He's a broken down old man, and his life is in shambles. The prominent figures in the crime scene are young, and don't respect him anymore.  There is a slight tear jerker of a scene in which he goes to the cemetery to visit his wife's grave. His grandson finds him there and he takes his hand.  At this stage in life he's starting to realize that family is more important than the pursuit of wealth and fame.

It's a pretty strong character study, and Jude Law turns in a strong performance. The film hinges on it.  His receding hairline, and old fashioned tough guy facial hair lend to his over-the-hill vibe, as well as his strong interest in himself. Richard Shepard, the director, similarly took handsome, successful Pierce Brosnan and turned him into an old, washed up hitman in his 2005 film The Matador. Shepard seems interested in the comedy of what happens as successful criminals get older.

It's vulgar and obscene at times, but the character has to change, and we need to witness his unsavory, prideful side before breaking it.  He wants to grow closer to his family, and that's reason enough for him to get away from his previous lifestyle of drinking, drugs and beating up anyone who doesn't respect the name of Dom Hemingway.  If you find yourself turned off by the beginning of the film, stay with it, and watch while things turn around.  Fans of Guy Ritchie will find something to like here, it's reminiscent of some of his work at times.  Don't let the mixed reviews scare you away, this is a pretty solid film.