Colorless Tsukuru Tazaki and His Years of Pilgrimage (2014) 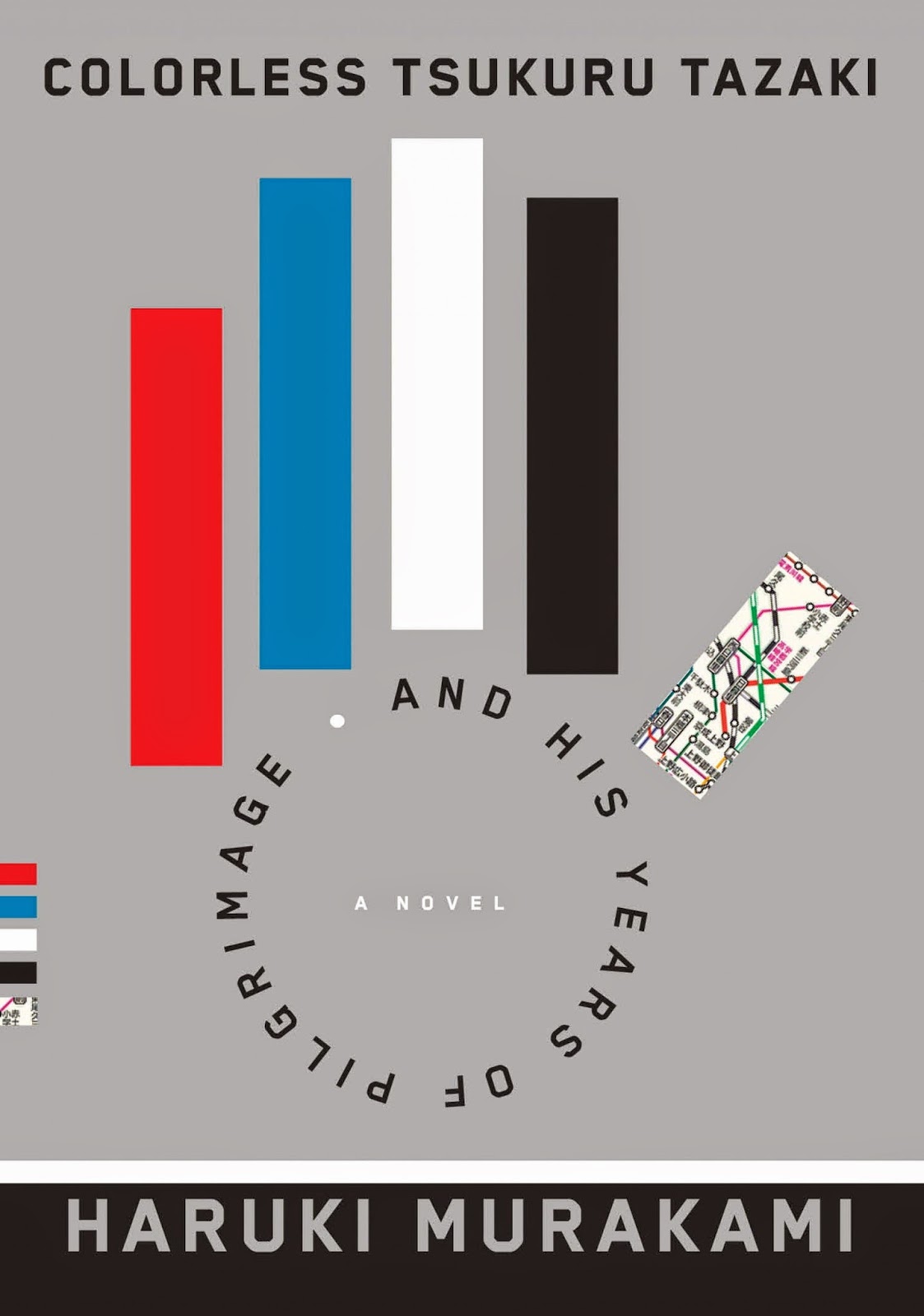 Murakami has achieved rock star status the world over. He doesn’t write the sort of stories you’d think would be immediately popular. He’s more of the quirky, indie drama type and yet his latest novel, a short one with an epic title: Colorless Tsukuru Tazaki and His Years of Pilgrimage sold a million copies in it’s first week of release.

There is something hypnotic about his meandering slice of daily life gone wrong after strange, and even perhaps mystic or supernatural things start to invade the lives of the main characters sending them on an inner, and in this case physical journey to resolve their emotional issues. However, I would say this is one of the more tame (even accessible) novels from Murakami when it comes to the mysticism.

Whether it’s in his narration or his character’s inner monologues, Murakami always has a way of infusing thoughts and ideas that strike a chord with me. Murakami is often very quotable (see links to quotes I've posted below), as witnessed by the Google+ communities, Tumblr sites, or Facebook pages devoted to Murakami and his writings (not to mention the copious amounts of fan art). His work often has an enchanting and distinct dreamlike quality to them and that’s certainly present in this latest novel.

In just 386 pages (small pages with fairly large font even), Murakami takes us through the life of Tsukuru Tazaki. He is the poster child for Murakami protagonists: the most normal, everyday citizen imaginable, an empty vessel with which the reader can implant themselves. Yet here is one of the few times the main character realizes he’s fairly empty and without special qualities.

From childhood, through high school, those essential developmental years, he grows up with 4 best friends. Two boys, and two girls, each of whom have a color as a part of their name, and each with a distinct quality about them. There is a star athlete, a talented musician, a geeky but brilliant intellectual, and big reader with dreams of becoming a writer herself. Tazaki is the “colorless” one. The one without a skill or talent, and perhaps even the odd man out in this quintet of high school best friends. He is very aware of his "colorlessness" and the fact haunts him, sapping his confidence.

Strangely, unlike the others, however, he knows for sure what he wants to do when he grows up, and he pursues it mercilessly. Always interested in trains and transportation, Tazaki heads off to Tokyo to study engineering in college with hopes of building and maintaining train stations to transport the dense population of Tokyo from point A to point B.

While away studying, he made frequent visits back to Nagoya (his hometown) to visit his friends. But one day, in his sophomore year of college, everything changed. He returned home, only to be cut off from his friends. Finally an ambiguous phone call from one of his friends asks that he stop trying to contact them and that he just leave them all alone. After being cut off from his closest friends, the people he loves the most in the world, Tazaki spirals into a depression. He eventually emerges from his depression a changed man both physically and mentally.

His first friend since the incident is Haida, but we can’t be sure whether he is real or not. Tazaki’s inner self is screaming to make a connection with someone. The story jumps around the timeline of Tazaki’s life, but eventually, while in his 30’s, he meets Sara, an attractive travel agent who is just about the perfect person for Tazaki to meet at that stage in his life. She likes him as well, but recognizes that even after 16 years, he still has unresolved emotional issues as a result of the abrupt loss of his friends. Before she is willing to take their relationship further she tells him he has to track down his friends and find closure. The physical journey, I mentioned earlier, takes up the rest of the novel as he finds his old friends in an attempt to heal the scars he still bears.


"That amazing time in our lives is gone, and will never return. All the beautiful possibilities we had then have been swallowed up in the flow of time."

Murakami's fascination here is the passage of time, love and friendship lost to time and circumstance. During his "pilgrimage" he constantly notes that he'll likely never be back to these places again, and he'll likely never see these people again. Everyone has their own path to follow, those paths will lead them in different directions. Once those times are passed, there will be no going back. It's the sort of thinking we rarely recognize till it's too late. Such clarity, when we find it, allows us to take in the beauty of these fleeting moments.

"One heart is not connected to another through harmony alone. They are, instead, linked deeply through their wounds. Pain linked to pain, fragility to fragility. There is no silence without a cry of grief, no forgiveness without bloodshed, no acceptance without a passage through acute loss. That is what lies at the root of true harmony."

People are like Tazaki, everyone has had a pain inside them they need to confront one way or another. Murakami describes it as a cold object near the center of our bodies. A hard core of earth that remains frozen if we can't warm ourselves. We have to melt that core and keep it melted, but our own body heat isn't enough to melt that frozen soil. We need the warmth of other people too. Like Wong Kar Wai's Fallen Angels, being close to someone we feel such lovely warmth.

In traditional Murakami fashion, music (usually either classical and/or jazz) plays an important role in the character’s lives. One member of a Google+ community devoted to Murakami has created several playlists from music found in his different novels and shared them using Google music. They make for appropriate listening material while digesting one of his novels. For Tazaki, the soundtrack is primarily (appropriately) made up of Liszt’s suite for piano: Years of Pilgrimage, particularly the “Mal du Pays (homesickness)” portion of the suite. It’s the piece his musician friend played most often and ingrained itself in Tazaki’s mind and heart.

I may be biased based on my love and appreciation for Murakami’s style and his previous works, but this is a great entry in Murakami’s still growing library. It’s not a perfect novel, details about Tazaki’s friends are fairly sparse. Given the relatively shorter page count it would have been nice if they were a little more fleshed out, and as always Murakami leaves us hanging with an ambiguous ending. Nevertheless this is a page turner. I rarely say that old cliche about how I couldn't put it down, because honestly it’s rarely true for me, but this time around that was certainly the case.