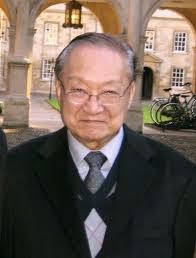 So you may have read my post on Ashed of Time and you may have even watched it recently, and you may be wondering who is Louis Cha?  I mentioned how Ashes of Time is based on the series of novels that go by the title The Legend of The Condor Heroes (which includes The Legend of the Condor Heroes, The Return of the Condor Heroes, and The Heavenly Sword and the Dragon Saber) by Louis Cha.  The series is also sometimes referred to as The Eagle Shooting Heroes, which was the name given to the parody film

shot during the same time as the shooting of Ashes of Time.

In the book Compassionate Light in Asia: A Dialogue

, which is a book of discussions between Louis Cha and Daisaku Ikeda, a prominent Japanese religious leader, we are told Louis Cha is currently the best-selling Chinese author alive; over 100 million copies of his works have been sold worldwide.

His success world wide means, that his novels have been translated into English, French, Korean, Japanese, Vietnamese, Thai, Burmese, Malay and Indonesian.

AsianWiki said of him:


"‘Jin Yong’ novels, revered in Chinese communities throughout the world, develop a very ancient Chinese oral and literary tradition. Beyond their value as entertainment, they are refined and sophisticated commentaries on the philosophical traditions of Buddhism and Taoism, and analyses of the on-going struggle for a mature Chinese cultural identity."

He has been compared to Tolkien, Dumas and even Shakespeare.  His writing is known for it's poetic beauty among his Chinese readers, however sadly much of that beauty can be lost in translation. His 15 novels were originally written in serialized installments for different publications in China and Hong Kong. They are as follows (dates given are the year in which the first installment was released):

His novels are of the Wuxia genre.  Wuxia's literal meaning is "martial hero." The stories are usually in written form, although they've been translated to film, television, and video game format as well.

Wuxia is a historical genre of fiction dealing with ancient and pre-modern china.  They typically have a male protagonist who either loses something or has lost someone or something important to them.  They then either learn martial arts, or use their existing knowledge of martial arts to right wrongs, fight for righteousness, remove an oppressor, and otherwise bring retribution for past misdeeds.

As you can imagine this is a very popular genre, and Louis Cha is perhaps the most popular Wuxia writer.

There seems to be a discrepancy about the names of some of the characters, likely due to translations, but the aforementioned AsianWiki page about Louis Cha states this:


"The Eagle-Shooting Heroes (1957-59)... contains the characters Dongxie (Malignant Lord of the East) and Xidu (Malicious Lord of the West). In ASHES OF TIME, Wong Kar Wai has extrapolated these two characters from Cha’s narrative – with one or two others, such as Hong Qi – and has imagined what they might have been like as younger men."

English translations of the stories are very hard to come by.  The only Louis Cha stories easily available are The Book and the Sword

, and The Deer and the Cauldron Book 1

.  That's why it's nice to at least have film and TV adaptions available for those of us interested.