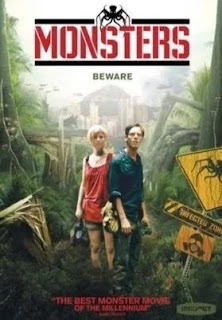 In honor of the upcoming Godzilla film (in theaters May 16), I decided to have a look at director Gareth Edwards’ 2010 film Monsters that I thought might just cover some similar ground.  (some spoilers ahead)

While I haven’t seen Godzilla yet (obviously), I can say the fact that Monsters of sorts are in the film is likely where the similarities will end. In fact, despite the name of the film, I’d hesitate to even call Monsters a “Monster” movie.

The back-story here, as stated in the film is as follows:

“Six years ago NASA discovered the possibility of alien life within our solar system. A probe was launched to collect samples, but crashed upon re-entry over Central America. Soon after, new life form began to appear and half of Mexico was quarantined as an infected zone. Today, the American and Mexican military still struggle to contain ‘the creatures.’”

The story follows Andrew Kaulder (Scoot McNairy), an American freelance photographer who is putting himself in harm’s way to get the shot of a lifetime of a live alien creature. He is also assigned the task of getting his potential employer’s daughter, Samantha (Whitney Able) back to America safely.

There is a post apocalyptic feel to the locations, and there is always the imminent threat of running into an alien creature, but this is not really a monster film. The monsters serve as a McGuffin of sorts. They are there to give our leads purpose and an ever so slight sense of suspense. For a monster flick it has perhaps the least suspense of any monster film I’ve ever seen. And yet that isn’t really the point trying to be made here.

It is at its heart a love story between Kaulder and Samantha. Both of whom have their own families. They make several calls home to family members/loved ones. Kaulder has a child back home (but no mention of a wife), and Samantha has a fiance, but it’s clear that she isn’t too attached to the idea of marrying him.

At first the relationship between Sam and Kaulder is a bit awkward. They are somewhat reluctant friends, but travelling together affords them time to get comfortable together. A bit like Lost in Translation, they are in a foreign country and while Samantha speaks Spanish, Kaulder does not. Their shared language and the simple fact that they are travelling together makes it easy to rely on each other.

Travel is difficult and all along the way they witness the destruction that follows the creatures, but is it really the creatures fault? We never see the creatures attack. The film was released in 2010, and might deserve to be compared/contrasted with the 2009 film District 9. This is, perhaps in some ways, like a low budget arthouse version of some of the ideas behind District 9.

There is a wall separating America and Mexico attempting to hold out these aliens. Obviously this sounds familiar.  It's not necessarily a subtle real life parallel with the border situation between America and Mexico.

The film never tries to make villains out of the alien creatures, and as one scene shows us it’s likely we are the ones causing the destruction. We seem to fight them out of fear more than out of necessity. We've created a war zone for unknown purposes.

As the great Roger Ebert said of the film,


“Edwards is brilliant at evoking the awe and beauty he has been building toward, and at last we fully realize the film's ambitious arc. I think the lesson may be: Life has its reasons. Motives are pretty universal. Monsters are in the eye of the beholder.”

The journey is the film, and it's a little slow.  It's not much of a monster film. It's better as a romance, but I'm left wondering what it would have been if not for the monsters that almost seem an unnecessary bit of side story.  Perhaps then it could have been concentrated with a little bit more of this and little bit less of that.  I say this only because nothing really happens with the aliens. Nothing is solved, and nothing is explained. It's not satisfying in that respect at all.

Overall the film isn't bad, it's just not that good either. Toward the end it may feel as though it just ends, but a wise viewer will remember the opening scene, and realize the film is a loop, a flashback ending where it began. It's open to interpretation but if you're confused by the end, watch the opening one more time.
Posted by Zach Owens
Email ThisBlogThis!Share to TwitterShare to FacebookShare to Pinterest
Labels: 2.5, 2010, monster, thriller