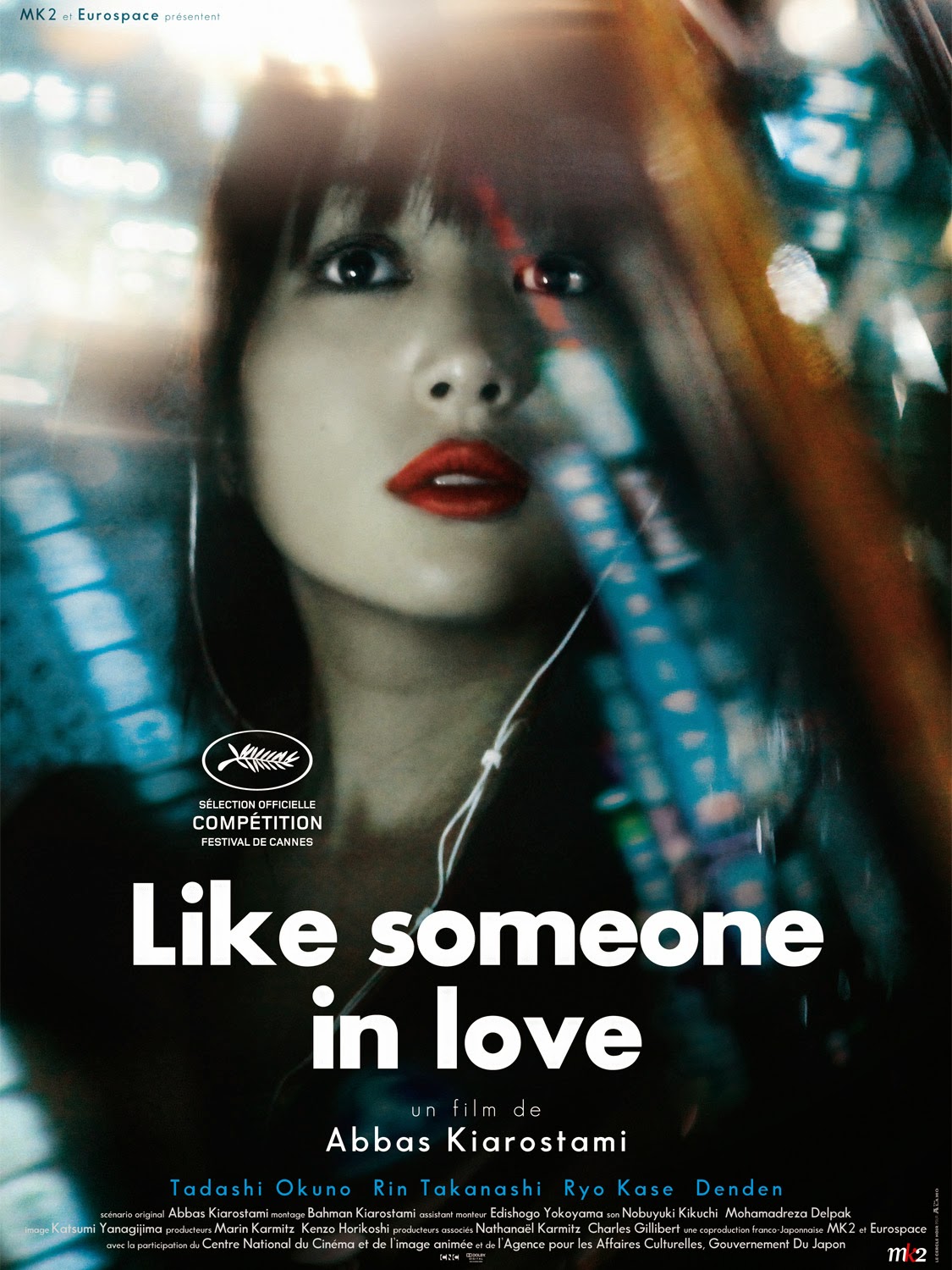 Let me first say that this film features a lot of longer takes and longer takes require good performances.  We get to see the performances the actors gave, instead of some of the best bits the editor could piece together.  The performances are all top notch. This is clearly the work of a seasoned veteran director working with some talented actors.

This film is beautiful in many ways. To me it's an example of how film can be beautifully simplistic.  The art of the long take has been lost in today's often hyperactively over-edited cinema.  The opening scene is a sign of what's to come. It's a long take only occasionally broken to give us a reverse shot.  At first we don't even see Akiko (Rin Takanashi). We aren't sure where to look or who is talking.  We are lost the way she is.  She's on the phone lying to her fiance about where she is and what she's doing.  The scene sets the rest of the film up all while giving us necessary background.

Akiko's fiance is the insanely jealous type, to the point of being abusive.  Although considering her line of work (not to mention the fact that she hasn't told him about it), his jealousy isn't exactly out of line, although the extent he carries it, and the abuse most definitely are.

It's a film that tries to present these lives as they are. It doesn't justify anything or point fingers at who is in the wrong.  Everyone has their good and bad sides.  The opening scene in the cafe is close to a documentary. The camera sits there, and has two shots.  It feels as though we walked into the cafe and sat down.  We are seeing people act naturally as if this is every day life instead of a movie.

Akiko tries every way she can to get out of going to her next assignment. Her employer has a specific job for her, a man he respects.  Despite protesting that she's tired and needs to rest, that she needs to study for her exams, and even that her grandmother is in town to visit and she has only today to see her, her unrelenting employer demands that she go.  She can sleep in the taxi he says.  In the end she knows she can't get out of it.

The following car ride sequence is brilliant.  Akiko sits and listens to her voice-mail and we over hear the messages from her grandmother, each one becoming sadder as we realize she's been waiting all day to see her and will leave very shortly.  Rin Takanashi plays it fairly subtly, but we can see her holding back tears. 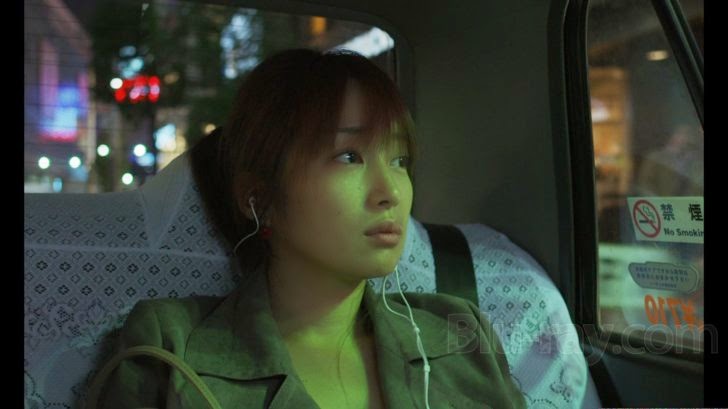 She asks to circle again, because we see her grandmother waiting for her.  She knows this is it.  It's her chance to leave it all behind and return to her previous life.  She wants to return to her family. She needs them back in her life, but she can't walk away from her new life.  That makes her relationship with Watanabe Takeshi, the professor, all the more important. He takes the place of the grandfatherly figure she needs.

The characters and situation in this film (to an extent) can be paralleled to Sofia Coppola's Lost in Translation.  A retired teacher, currently spending his days writing and translating books, meets a young 20-something who is still trying to figure out life. They bond and form a relationship that is more about friendship and being with each other in their time of need rather than anything sexual.  It's possible to see it this way (I know it's a bit of a stretch), but while the characters are, in some ways similar to that of the ones in Lost in Translation, the people are quite different.

She is a young woman trying to make the move from smaller town to big city and prostitutes herself in order to pay for college.  He is Watanabe Takashi, an aging writer, and former college professor, who has lost his wife.  In his loneliness and need for companionship (and a break from his writing) calls on a the young girl perhaps because her photo reminds him of his wife or daughter, or perhaps simply out of sheer happenstance her employer suggested her and it ended up a perfect fit. We can't be sure. 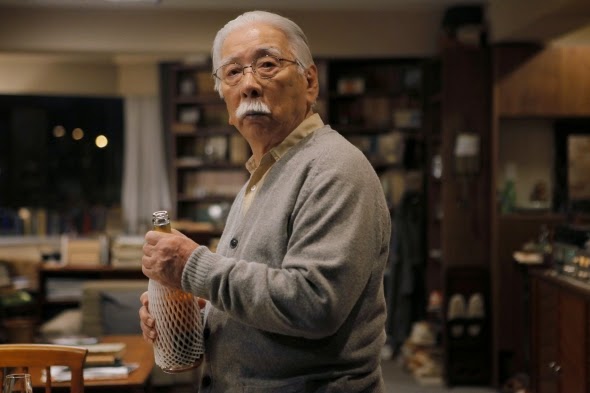 Watanabe's need is for companionship, so it's quite clear he has no intention of having a sexual relationship with the girl.  He simply wanted to have some dinner and wine and chat for a while. Not understanding his intentions, or perhaps because she was so exhausted, she seems to want to get things over with and go to bed.

There is a great shot where she sits on his bed trying to entice him to go to bed, but he sits as far away as possible on a chair at the end of the room. The shot is just of him, but we can see her reflection in the TV.  She's like a memory of his wife from long ago.  He leaves the room unplugging the phones and turning off the lights to allow her to sleep in peace.

The following morning he takes her to her class.  And offers to wait for her to return so he could take her anywhere she'd like to go.  In a later scene when she calls for him needing his help, he quickly drops what he's doing (working on translating his book) to go help her.  Perhaps it's his paternal instinct, but he wants to take care of her like she's his own granddaughter.  Whether or not things started out with different intentions, just the right people met at just the right time and fit into each other's life in just the right way.

While he waits for her to return, her fiance shows up and chats with Watanabe assuming he is her grandfather.  He lets him assume.  He doesn't give up her secret. 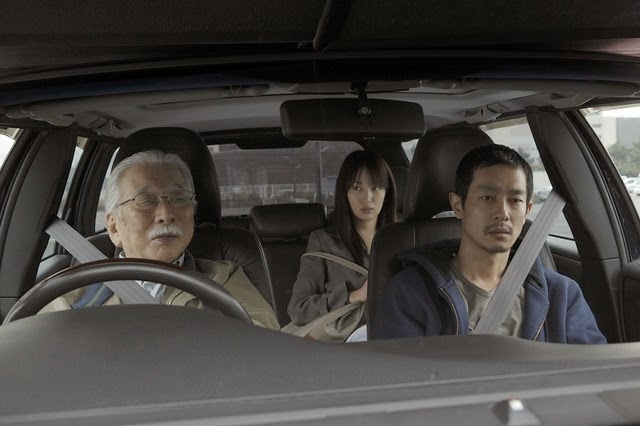 The next scene when Akiko returns and the three drive around is a tad awkward and ever so slightly intense.  Akiko is not sure what her fiance knows, or how much Watanabe has told him, and the fiance believes the lies he's been told by both Akiko and Watanabe.  It isn't played up for dramatic tension though. Kiarostami allows the scene to play out naturally.  If you and I were to be sitting in a tense car ride unsure what would happen next, there wouldn't likely be tense music to make things worse for our psyche.

While they are chatting, Watanabe gives the fiance some advice on the idea of marriage and what not, but the fiance balks at it saying he's just trying to protect Akiko.  Watanabe responds by saying,  "I'm simply telling things as they are. You're free to accept them or not. Afterall, it's just my opinion."

It would seem this is Kiarostami talking to his audience.  He does everything he can to shoot and edit the film to look and feel as natural as possible.  Like any good art, the film is up for interpretation.  He gives us the people and what happens, perhaps without spelling everything out, and leaves it for us to decide.  I've read some about the film and people seem to be divided about the events that take place, particularly the ending.

To be sure, the final scenes leave more open to interpretation than any other in the film.  We are left to infer quite a bit.  Kiarostami ends the film so abruptly you'll be shocked to find the credits rolling.  Try as I might I can't find resolution or even a pleasing ambiguity to the ending. It just ends. It feels as though it's missing a good sized scene or two from the ending.  But I'm sure Kirostami would be insulted that I didn't get what he wanted and that I questioned his decision to cut it off at that point.

The film leaves us wanting, perhaps just the way the characters have been left wanting.  Perhaps it's as Watanabe says, "don't worry it'll work out." He sings Ke Sera Sera as a way of encouraging Akiko. The future is not ours to see.  That's particularly true for this film.
Posted by Zach Owens
Email ThisBlogThis!Share to TwitterShare to FacebookShare to Pinterest
Labels: 2012, 4, drama, Japan