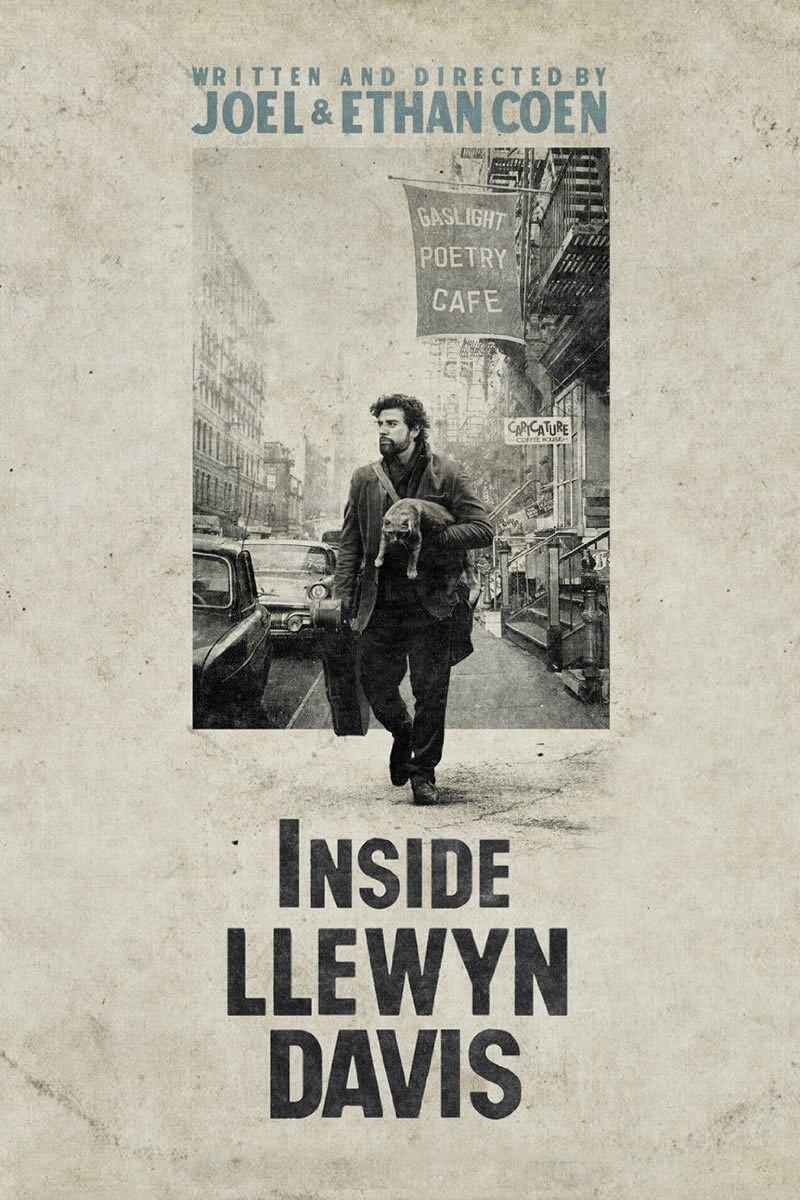 I finally got around to catching up with one of the films from the end of last year (didn't actually make it to theaters in my area until January of this year). It made a lot of people's top ten lists, but if you remember it was on my list of films I didn't get around to that could have made my top ten.

The film follows Llewyn Davis for a short time as he tries to "make it" as a singer/songwriter in the New York folk scene of the early 1960's.

Even though it's about a singer/songwriter, this is really a film for any aspiring artist. It's a bit of a bleak look at the aspiring artist, but it's something anyone trying to make it in their respective artistic field can identify with. The sad reality is that most people won't make it into the business, at least not in the way they'd hoped, but they'll spend much of their lives trying. Llewyn Davis is one of those people. In a generation that is possibly more about following your dreams than any other, this film (despite being set in the past) in some ways, is about the futility of following your dreams.

For Llewyn there are two kinds of people, the ones that chase their dreams even if it means no roof over their head, constant borrowing and couch surfing if they have to, completely without compromise, and there are the people that don't. The ones that don't are willing to take whatever work they can to survive and provide for themselves and their families. Llewyn won't allow himself to be this kind of person. He considers himself above other jobs, and looks down on those who would compromise their art for another job.


However, in his own way, he does make compromises for needed money. He works with his friends, despite obviously hating the music he's playing. He's desperate enough for cash to do the recording in the first place and accept cash upfront with no royalties, which obviously ends up being a mistake. Other times (most of the time) he refuses to compromise. He turns down opportunities for success because he believes he knows what's right for him, not necessarily what's best for him. It's what he wants and expects of himself.

As a lot of other aspiring artists might recognize, sometimes you just believe yourself to be better than those around you. Llewyn Davis has a very obvious superiority complex. To a certain extent, you have to in order drive yourself, but Llewyn hates every other aspiring singer/song writer around him to an almost comedic degree. It isn't always even that the competition is bad, in fact many scenes we watch and enjoy listening to others playing music, but when we see Llewyn's face we can tell he hates it. It's as if admitting that anyone else is good in some way diminishes his own abilities. Perhaps there's a jealousy to it on some level, but (full disclosure) I'm no stranger to this feeling myself. In some way you have to nitpick and find reason to dislike what you see/hear/read in order to keep holding yourself above everyone else. It's a tendency that's likely common among artists, particularly aspiring artists, who haven't made it yet, and need to have confidence in themselves when no one else will. 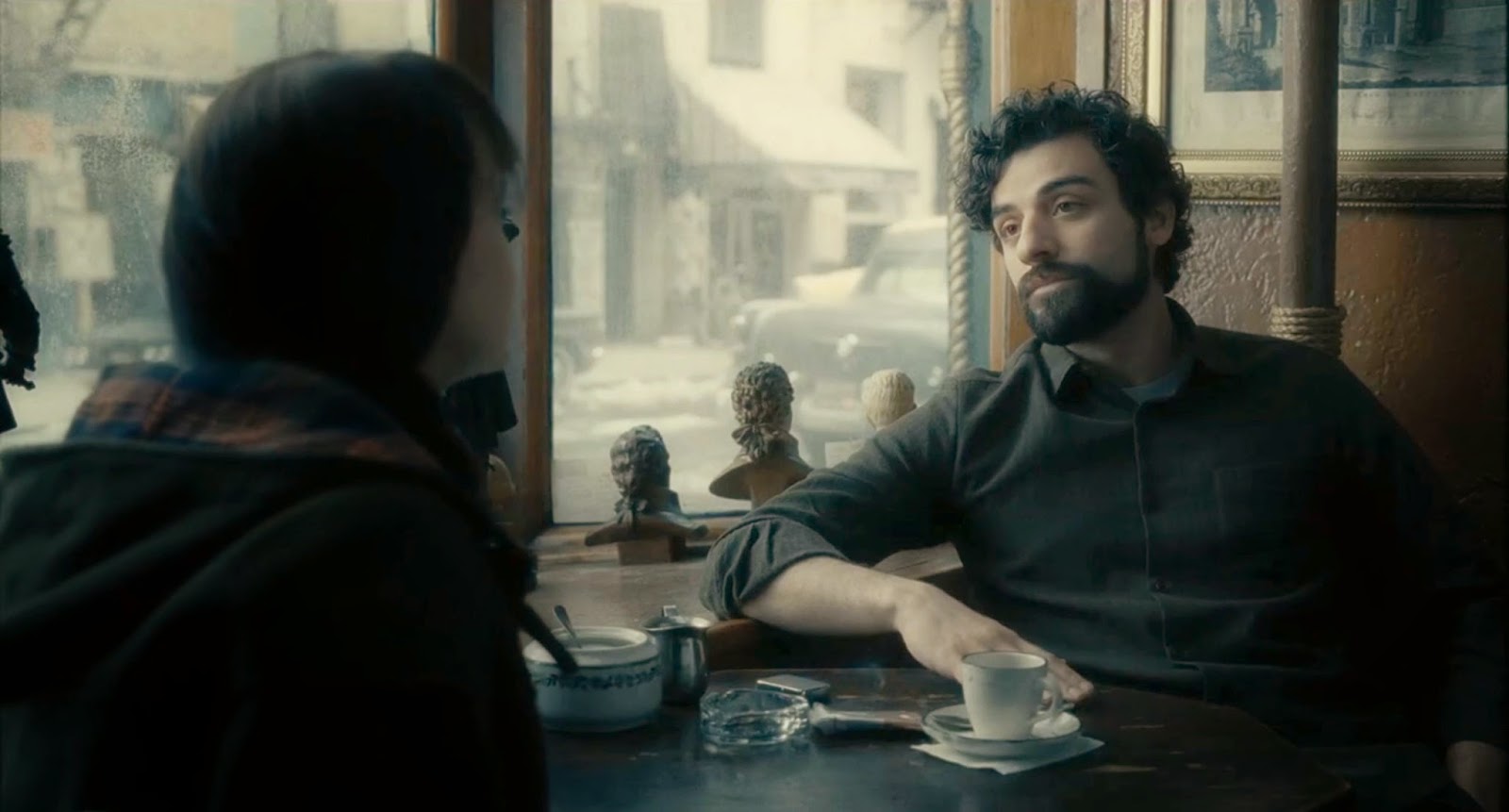 Obviously, in order to buy a character that feels this way, he has to actually be talented, and Oscar Isaac is not only a good actor but a talented musician and singer. Yet, Llewyn Davis still isn't making it. He's had some success as a team with his former partner who we find out committed suicide, after which Llewyn refuses to team up with anyone else. It could be out of loyalty to his partner or stubbornness to make it on his own, but we can't be sure. He's even recorded his own record but can't seem to get anyone to listen to it.

When he meets new people he introduces himself as Llewyn Davis expecting people to recognize the name, but no one does. In fact people only recognize him for his family name asking if he's related to the man who is his father, a former navy man, a fact to which Davis reluctantly acknowledges. Davis wants to make it in the business, but at the same time his uncompromising nature won't allow him to do so. Perhaps he's too short sighted, but he wants to find success in his own way, not the way people advise him to. After a lengthy trip to Chicago he performs, with the hope of being given a label, but he's told he isn't a solo act and would be better served teaming up with one or two others. He refuses the offer. For him it'll be a solo act doing what he wants, or nothing at all. 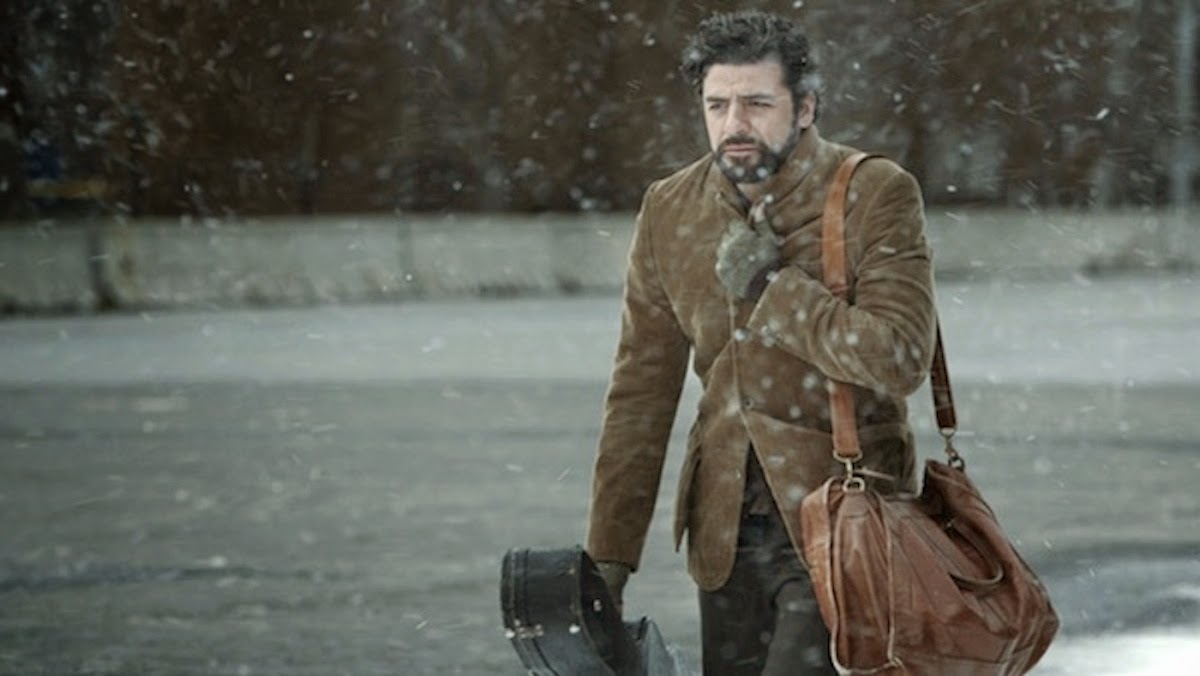 "Nothing at all" tends to not pay very well though. He moves from one friend or acquaintance's house to another crashing on their couch. It's a rough life, and it clearly weighs on him from time to time.  While staying with one couple they ask him to play something for them at dinner, to which he angrily refuses to be their "trained monkey." They've taken him in off the street, and the one thing they ask him to do he refuses because it's his job not a game, or a hobby. He refuses to pay them in that way.

He is at times not a very nice person and many people seem to dislike him, but just as many are willing to offer their couch. His anger, and rough attitude is understandable. It is a tough life, and we the audience feel for him more than most of the people who interact with him in the film. As he mentions (about a song he's about to sing), "it's never new and it never gets old, it's a folk song." Perhaps so is the lifestyle Llewyn Davis is living. The struggling artist is a timeless tale, the people who wrote the songs he's singing likely lived similar lives. He never thinks much about the future (that speaks to the shortsightedness I mentioned before) but it's clear he doesn't desire the structure of a house and family. Perhaps that's why he's unwilling to "settle" for a job and in the process keeps himself from ever becoming successful. It's a bit of a catch-22. He refuses his chance to work as a team in Chicago, but the refusal means he won't give himself a place to start, a foothold in the business. 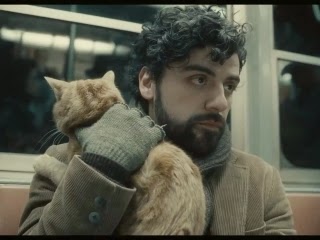 After the cat belonging to the people he's staying with runs out just before the door closes, he is forced to take care of it, taking it everywhere he goes. He makes a call and asks someone to leave a message to the owner of the cat saying, "Llewyn has the cat." Which, of course, is misheard and repeated back, "Llewyn is the cat."

If you were wondering what the symbolism of the cat was meant to be, the Coen brothers tell us in a not so subtle bit of dialog. Llewyn is lost and eventually injured limping as he tries to make it on his own.

Yet, despite all of this, somehow I wouldn't describe this movie as a total downer. It's fairly bleak, it doesn't really grant much hopefulness, but it's enjoyable anyway. It's one of the better films of 2013. So if I were re-doing my top ten films of 2013 after having seen the film, would it make the list? Yes, I liked it that much.
Posted by Zach Owens
Email ThisBlogThis!Share to TwitterShare to FacebookShare to Pinterest
Labels: 2013, 4, drama, music, period piece