Japan is frequently hit by tsunamis and earthquakes, but endured the deaths of an estimated 150,000 to the atomic bomb less than 10 years before this film's release.  It made sense then that Japan would be the one to be attacked by an enormous creature of prehistoric proportions.


This is almost the original Godzilla, the original Kaiju film. Kaiju simply means "strange creature," but in English has been translated as "monster." Last year's Pacific Rim didn't even bother to translate it and simply referred to the creatures as Kaiju.

I say almost because the original Godzilla was a Japanese film from 1954. Godzilla, King of Monsters! is an American re-edit of the film released to the western world.  It features scenes with Canadian actor Raymond Burr and a few Japanese actors intercut with scenes from the original film.  A few scenes dropped and a few added, and most of the negative talk of Americans/nuclear attack removed, and you have Godzilla, King of Monsters! Which is a slightly curious subtitle considering he doesn't fight any other monsters in this film, although he obviously would in future Godzilla films.  I'll talk a bit more about the original film in a bit, but first on to the 1956 version. 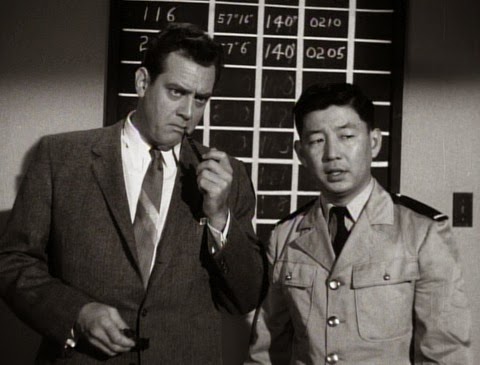 The film begins by showing the aftermath of an attack on Tokyo, where Steve Martin (Raymond Burr) emerges from the rubble.  He explains through voice-over that he's a foreign correspondent on his way to Cairo.  During a layover in Tokyo he takes interest in a series of attacks that have destroyed a number of Japanese ships.

The reports were that there was a blinding flash of light, then flames rising out of the ocean engulfing the ships. At least 8 ships are destroyed before they cancel shipping schedules.

Meanwhile a fishing village on Odo island is the first to see the creature.  Martin and a group of scientists head there to investigate.  After some investigation, an attack or two, and some more investigation they find radiation all over the island, especially inside the over-sized footprints they discovered.  They deduce that Godzilla was brought upon them due to the H-bomb.

They know they must evacuate as a many as they can and prepare for an attack.  With this in mind the army constructs a line of 40-meter electrical towers along the coast of Tokyo that will electrocute Godzilla while tanks and soldiers fire at him.  Of course it doesn't take long for him to tear through the defenses and set the city ablaze. 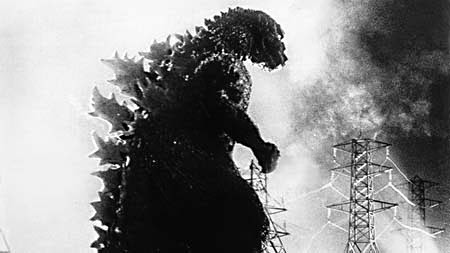 Perhaps I should have mentioned that earlier in the film we are introduced to Dr. Serizawa (Akihiko Hirata), a scientist gaining interest in the far east for his experimental science.

Their secret weapon, a device created by Dr. Serizawa, called the oxygen destroyer that upon releasing into the ocean would kill not just Godzilla but anything else in the water. They struggle with the morality of using such a device and fear what would happen if it fell into the wrong hands.

After seeing the destruction of Tokyo, and hearing children singing a hymn in remembrance of those who lost their lives, they decide it must be done.  However, they agree that it would never be used again, and Dr. Serizawa sacrifices himself to ensure the secret of his weapon dies with him.

Sadly this is where the American version cuts things short. The Japanese film was a dark film. A metaphor for the atomic bombs that devastated two of Japan's cities.  In the original film many die of radiation poisoning, and many people die during the destruction, but this version is censored for western audiences.

Godzilla was essentially always supposed to be a metaphor for atomic warfare hidden under the guise of a Japanese remake of an American film from a year earlier called The Beast from 20,000 Fathoms.  In that film atomic bomb testing unearths/mutates a pre-historic beast that eventually attacks New York City.  Obviously that sounds familiar, but Godzilla was much more than a monster flick. It carried a lot of deeper meaning to the people on Japan at that time.  And while it was originally panned by critics in Japan, eventually it received its' due being put on many lists of the greatest Japanese films ever made.

However, this re-edit for western audiences is a more dumbed down version of the film.  It features lots of over the top acting and some pretty terrible dubbing.  Obviously the old special effects don't hold up, but that's to be expected and we can't judge it too harshly for that.

In this film Godzilla was over 400 feet tall, and the creature would grow over the years. The Gareth Edwards version of the creature will be the tallest yet.  Edwards has also spoken of how he wants to return Godzilla back to its roots a bit more.  He explained, in an interview with IGN, that they are trying to connect it to modern events the way the original was connected to events in its day.


It's also clear from more recent trailers that Godzilla isn't the only Kaiju in the upcoming film.  It would seem that Edwards also wants to allow Godzilla to fight other giant creatures as well, in keeping with other films in the franchise.

Netflix as well as the other streaming services have quite a number of the Godzilla films if you're looking to get caught up on the franchise before the new film hits theaters this Friday.