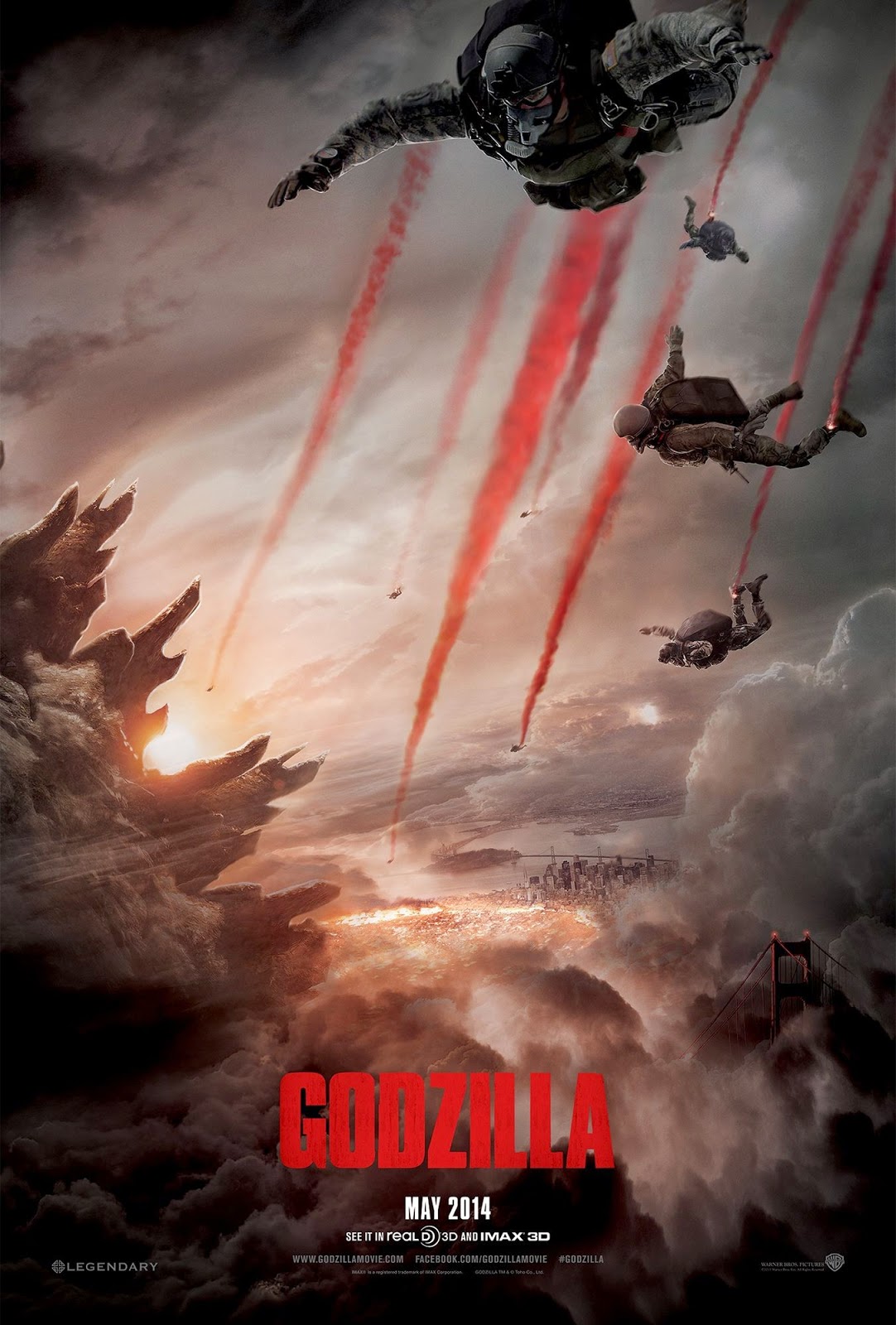 Godzilla has grown taller over the years. Buildings have gotten taller too, so maybe he had to grow to take down taller and taller buildings. Who really knows the reasons? Either way Gareth Edwards' new film has the kaiju taller than he's ever been.

I don't believe it's a spoiler to talk about things that we know from the trailers, but if you've been avoiding those as well, be forewarned, you may not want to read further.

As usual, it takes a while before Godzilla shows up in the film.  We have to start with the main characters first.  The film follows the Brody family.  Two generations worth of the Brody family.  Young Ford Brody (CJ Adams) makes a "Happy Birthday" sign for his father Joe Brody (Bryan Cranston), who is too busy to notice before heading off to work.  Ford's mother, Sandra (Juliette Binoche) works at the same plant as his father, until she dies in an unfortunate accident at the plant.

Fifteen years later Ford is the grown up too busy to notice his son Sam.  Turns out Joe is still obsessed with studying the cause of the accident.  The government has closed down the site of the old plant claiming there is dangerous levels of radiation.  Joe has been arrested for trespassing on the site, and Ford has to come bail him out of jail.  Joe talks Ford into going back in again.  While they're there a creature awakens and breaks free.  They call it a Massive Unidentified Terrestrial Organism (or M.U.T.O.).  As the trailer shows, and following franchise tradition, Godzilla must fight to restore balance to nature. We being ants are no match for these monsters, but Godzilla must reassert his dominance as king of monsters. 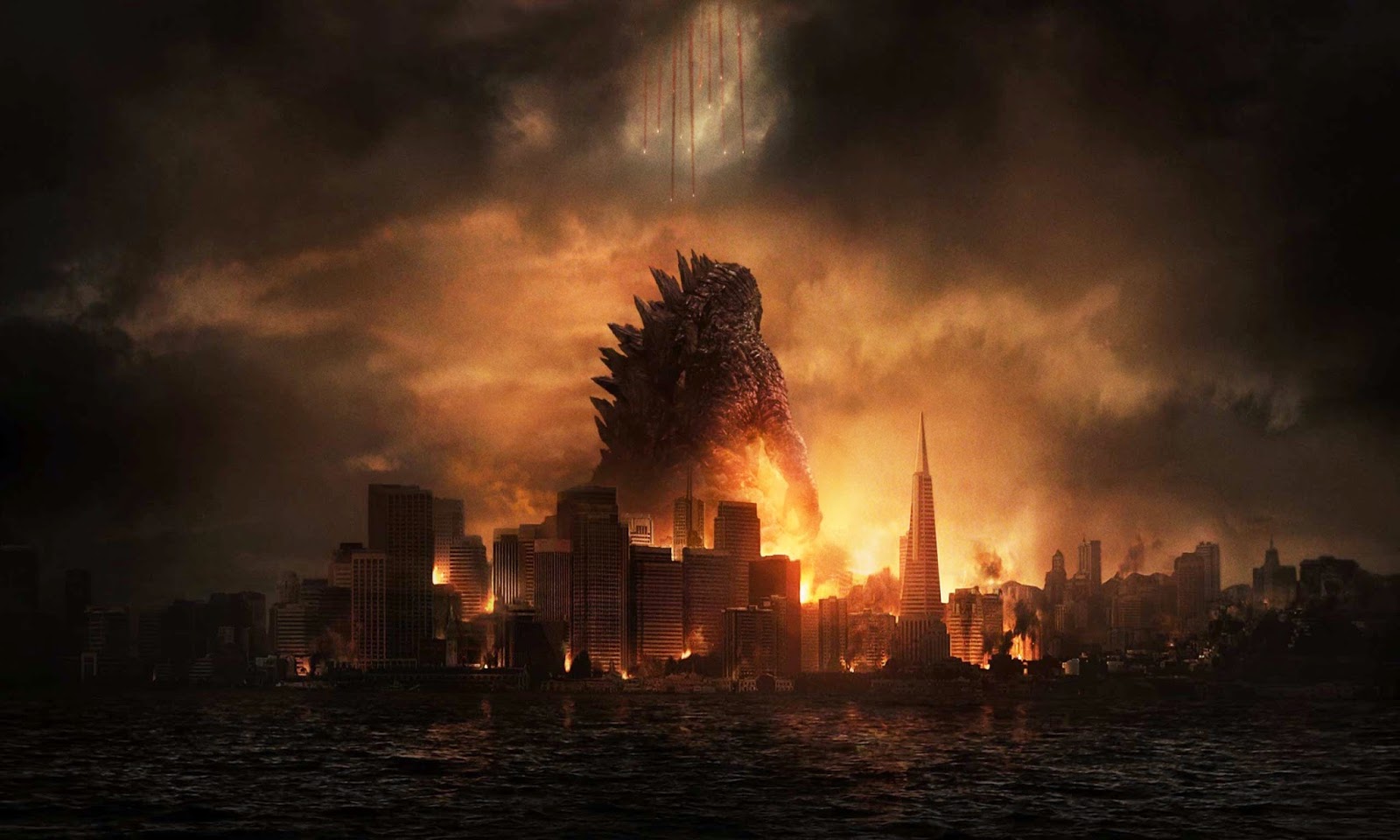 Having recently caught up with the original and a few other Godzilla films from over the years (many of which are available on Netflix and other streaming services), I appreciated the nods to the franchise's origins, but almost wish they had done more.  For example Ken Watanabe plays Dr. Serizawa, who in the original, created a device that could kill Godzilla, but tries to avoid using it and even sacrifices himself so the knowledge of how to create the weapon would die with him.  Sadly here, Serizawa is simply a scientist who is behind studying the creatures, and in the end warns against using nuclear weapons.  I wished he had more to do in the film.  There was a point where I came to realize that in every one of his scenes he was standing around gawking with his mouth hanging open as if he were in shock and deep thought at the same time.  They also replicated an iconic shot where a giant kaiju holds a train car up in it's mouth.

The design of Godzilla looks far more like Godzilla from the older films rather than that terrible redesign for the 1998 film.  The visuals in this film and the sound design, particularly the roar of Godzilla, (which is a modern take that stays pretty true to the original) all give this film an impressive sense of scale.  This film would be quite a spectacle on IMAX.

Humanity here is a collection of ants fleeing for their lives, but thankfully Gareth Edwards never forgets about the ants.  Man is never taken out of the equation all together, but it's clear we'd never survive without the king of monsters.

As Dr. Serizawa states, "the arogance of man is thinking that nature is in our control and not the other way around."  It's humbling to think about. Anytime there is a natural disaster like a tornado, earthquake or hurricane we are reminded of this fact.  Godzilla is a force of nature literally and figuratively. We can only hope to escape the path of destruction and wait till the storm is over.


The original Godzilla was a metaphor for the atomic bombs hitting Hiroshima and Nagasaki and the devastation they caused in Japan.  This film can be seen as a metaphor for the Fukushima earthquake and tsunami from 2011 and the resulting Fukushima Daiichi nuclear power plant disaster. It also reminds us of our constant on again, off again fear of weapons of mass destruction.

Obviously there is destruction, and you'd think audiences would be getting tired of seeing major cities getting destroyed due to all of the recent superhero films devoting their last acts to destroying as many buildings as possible.  But this isn't a hero film, it's a disaster film, and thankfully the army in this film is careful enough to not be the ones responsible for all the destruction.  Also Gareth Edwards devotes time to seeing that things aren't just destroyed and forgotten.

It's a spectacle worth seeing in theaters while it's out, and if you can, see it on IMAX.  It may not carry the weight or cultural significance the original did, but it's not entirely without meaning.  It's a monster film, but it's one of the better ones and it's a new high point for the Godzilla franchise.