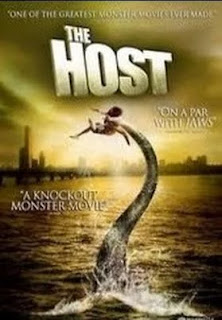 This Korean film from 2006 is a strange combination of dysfunctional family comedy/drama, and monster horror flick that somehow actually works.  It is, of course, reminiscent of monster films of years past.  It begins with a chemical disaster... sort of.

They use the old "chemical disaster" ploy as an opportunity to work in some political satire.  The opening scene is a flashback to the year 2000 at the Yongsan U.S. Army base in Seoul.  An American mortician, played by Scott Wilson (who you may know as Herschel from the Walking Dead) orders a subordinate to dump dusty bottles of formaldehyde down the sink, despite his protests that the sink empties into the Han river.

This scene is inspired by a real life incident in which Albert McFarland, an American mortician, at the Yongsan military base, had his staff dump around 120 liters of embalming fluid down a drain in the morgue near the center of Seoul.

As David Scofield wrote for Asia Times back in 2004, "The fluid had been treated at two waste-treatment plants before reaching the Han River, where this capital city gets its drinking water, and later simulation tests indicated the fluid was not toxic when it reached the water."  As you can imagine, it caused quite a stir of anti-American feelings in South Korea where the Americans had already overstayed their welcome.

Here, the incident serves as the chemical disaster from which the over-sized monster comes from. 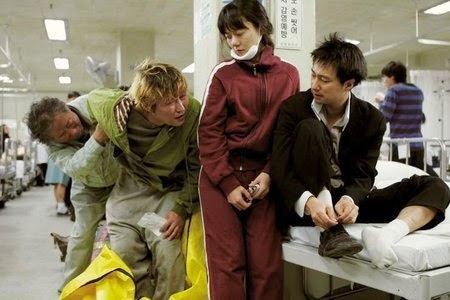 Next we meet the family at the center of this film.  The father, Park Hie-Bong (Byeon Hie-bong), owns a snack stand at a park overlooking the Han river.  His eldest son Park Gang-Doo (Kang-ho Song) is perhaps the primary character of this ensemble.  He is a lazy bum, his father always gets on his case for his poor work quality/ethic.  Gang-Doo's daughter, Park Hyun-Seo (Ko A-sung), seems happy despite her troublesome family. Gang-Doo is a bad father to Hyun-Seo; He has her uncle show up for parents day at school in his place, and the uncle, Park Nam-il (Park Hae-il), shows up drunk.  Turns out, he's a chronic drunk who can't seem to hold down a job.  The eldest sister of the family is Park Nam-Joo (Doona Bae, whom you might recognize from Cloud Atlas), is a famous archer. 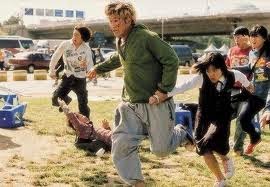 While working the snack stand, Gang-Doo (and a group of people) spot the large creature just before it attacks.  Jim Emerson, writing for rogerebert.com, called the first attack sequence: "...one of the best fleeing-in-panic crowd scenes ever filmed."  While I'm not sure whether I'd go that far, it is a good sequence and probably the best in the film.  Toward the end of the attack the creature takes the young girl, Hyun-Seo, and flees the scene.

Instead of going too far into melodrama, after the loss of the youngest member of the family, the film turns to comedy.  While in the gathering place for those mourning the victims, Hyun-seo's family all show up and have a comically over-distraught crying session that turns to accusation and fighting.

Soon after, men in hazmat suits show up and take everyone away.  They are especially interested in Gang-Doo, who got the creature's blood on his face during the attack.  Eventually news breaks that there is some sort of virus in the area. Studies of the virus reveal that Chinese civet wildcat and SARS is the host of the virus.  It's all a cover up by the Americans.

Except for the American cover up, this virus scare is based on the real SARS virus from a few years before this film's release.

At a center for disease control Gang-Doo gets a call from Hyun-Seo revealing that she is still alive somewhere.  No one there will believe them so, finally united, the family sneak out on their own. 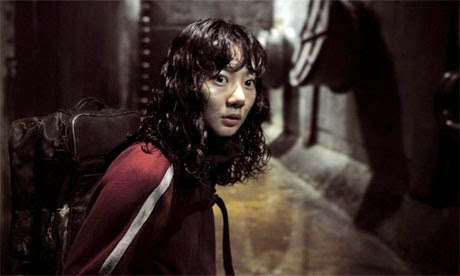 The scenes in this film with the creature are mostly in broad daylight, as opposed to the dark of nighttime where a lot of films of this type spend most of their scenes.

Now is the time to tell you, sadly, the CG in this film has not held up particularly well, but remember this was made back in 2006, and that the CG was just OK even for that time.  I can't help but wonder whether the film would have been better off if they had gone with the Jaws approach of not showing the creature much, and letting the audience's imagination do the work.

If you can forgive the short comings of the CG creature itself there is enough entertainment in this film to enjoy.
Posted by Zach Owens
Email ThisBlogThis!Share to TwitterShare to FacebookShare to Pinterest
Labels: 2006, 3, horror, Korean, monster, thriller