I've been waiting a bit to do a post about The Grand Budapest Hotel.  I recently got the chance to see it for the second time, and I loved it every bit as much as I loved it the first time.

The film opens with a girl walking into a cemetery where she pays her respects to the grave of someone known only as "Author" (played by Tom Wilkinson).  She begins reading his book, which takes us back in time to 1985, where the Author tells us that many of the stories authors write aren't created from thin air, but are based on the stories that others tell. 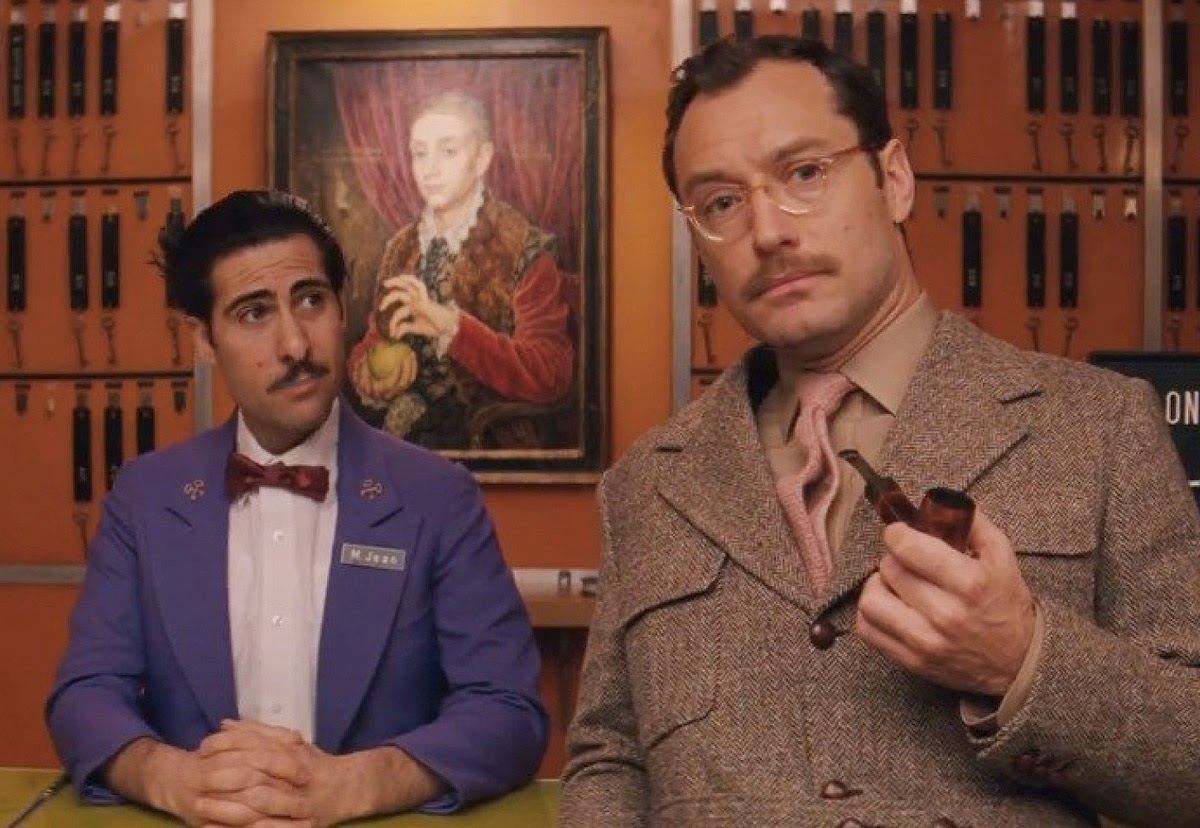 We jump back in time again to see the Author in his younger years (now played by Jude Law). He tells of how he came to meet Mr. Moustafa (F. Murray Abraham), and the rest of the story is Mr. Moustafa's telling of how he came to own The Grand Budapest Hotel.  The Hotel itself is now a ruin where few if any come to visit.  It is mostly inhabited by the people who work there, and they all live solitary lives within the solitary building.  Mr. Moustafa begins his story by taking us back even further, to 1932 to explain how he met Mr. Gustave H.

Gustave is charming, poetic, and gentlemanly.  The Hotel is always bustling. The people who come to stay there come for Gustave as much as to stay in a classy hotel such as The Grand Budapest.

We meet Zero (Tony Revolori) at the same time Gustave does. He is to be his new "lobby boy." He is a refugee who fled from his home, because of the war, after his family had been killed. 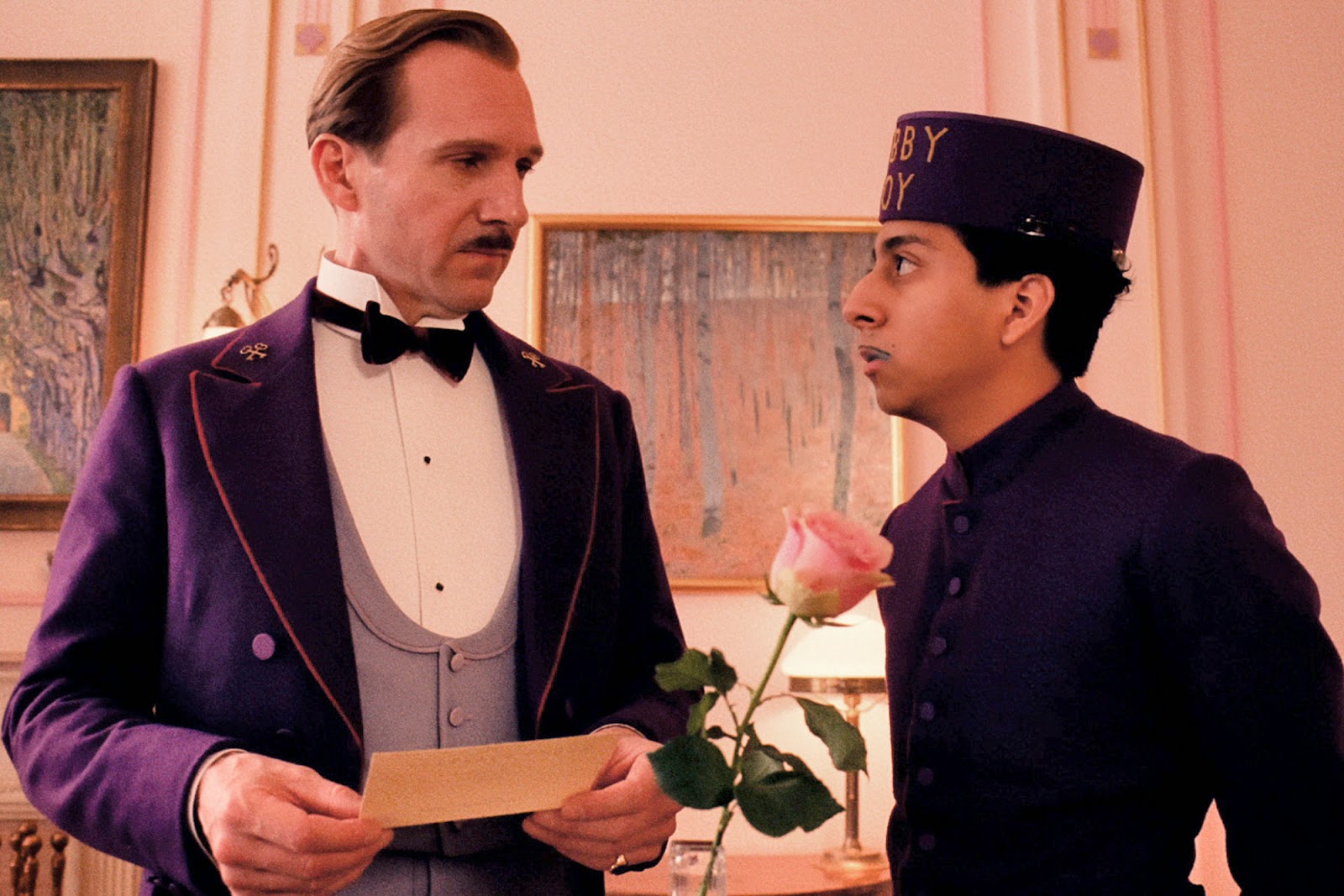 Gustave takes him in as his protege not knowing that he would become his closest friend and confidant.  In truth Gustave needs Zero as much as Zero needs him.  Zero needs a roof over his head, a job, and a father figure; Gustave comes from a life of privilege in his high society hotel, but will need Zero to help him get his life back after being torn from his comfort zone.   It's obvious that he feels at ease with Zero.  Gustave holds himself to a high standard, especially when it comes to his speech.  He tries to remain as eloquent as possible, but lets his more inner feelings out when around Zero, which usually results in a comedic breakdown of his speech.

Gustave tends to go for rich, older ladies, and the death of Madame D (Tilda Swinton) finds Gustave accused for her murder, especially after it's found that she was to leave him with her priceless painting "Boy With Apple" upon her death.  They steal the painting and make a run for it, but the police track them down and take Gustave to jail. 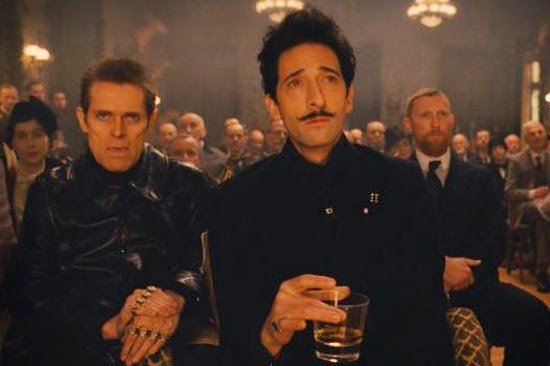 Meanwhile Madame D's son Dmitri (Adrian Brody) and his henchman Jopling (Willem Dafoe) set out to find the painting and kill anyone who gets in their way.  Gustave needs to break out of prison, clear his name, and reclaim the The Grand Budapest Hotel, which in his absence, has fallen under control of this alternate world's equivalent of the Nazi's (with their swastika-like emblem).


Despite my previous thought that a character could not be both funny and sinister, Dafoe's Jopling proves me very wrong.

Most Anderson films are a mix of subtle/dry humor and drama, and while The Grand Budapest Hotel certainly has these elements, it's many more things.  It's at times a Hitchcockian wrongfully accused suspense film, as well as a murder mystery, and somehow, despite this, never loses it's comedy.  In fact I think it's the funniest film he's ever made. 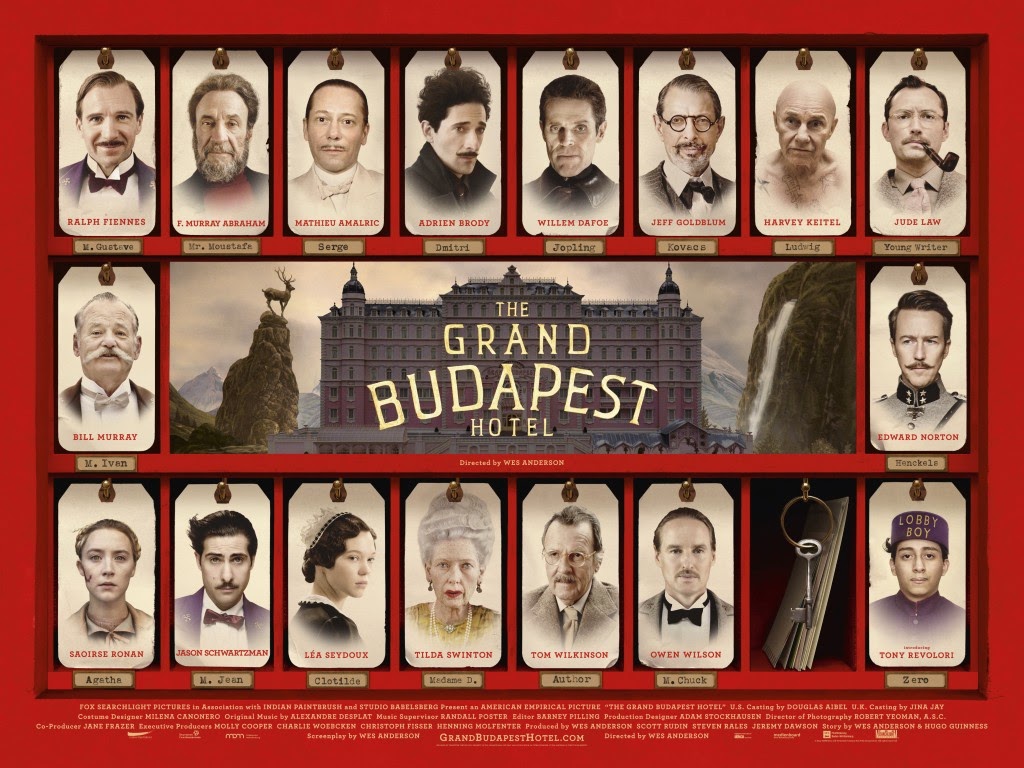 There are so many famous faces, many of whom are Anderson regulars, that serve as supporting characters, even Bill Murray and Owen Wilson appear in cameos.  Yet the film never loses sight of it's main characters Gustave and Zero, played by Anderson newcomers Ralph Fiennes and Tony Revolori.  Both are good, but Fiennes is outstanding.

The film, like all Wes Anderson films, is beautiful to look at. In fact it's the best looking film he's ever made, which is saying quite a lot because all his films are a treat for the eyes.

It's immediately, abundantly clear that it's different from any other film you'll see in the theater this year. It's a taste of classic cinema.  It has all the Anderson trademarks: beautiful colors, tracking shots, and characters leaving one perfect composition while the camera pans 90 degrees to reveal another perfectly composed shot for the character to enter.

Wes Anderson, who always tries to create a higher class of film that stands out from the rest of the film industry and always speaks as eloquently as possible, can be likened to the character he created in Gustave, especially when we consider the line uttered by Mr. Moustafa toward the end of the film:


“There are still faint glimmers of civilization left in this barbaric slaughterhouse that was once known as humanity... He was one of them.”

With this in mind, Filmspotting's Josh Larson so cleverly observed:


"Wes Anderson has played with doll houses (The Royal Tenenbaums), toy boats (The Life Aquatic), and puppets (Fantastic Mr. Fox). The Grand Budapest Hotel is his snow globe...  A comedy about the tragedy of nostalgia – nostalgia for aspect ratios no longer used and for a Europe no longer found – The Grand Budapest Hotel indulges in such glimmers, seals them in a precious snow globe and hopes they’ll forever be preserved." 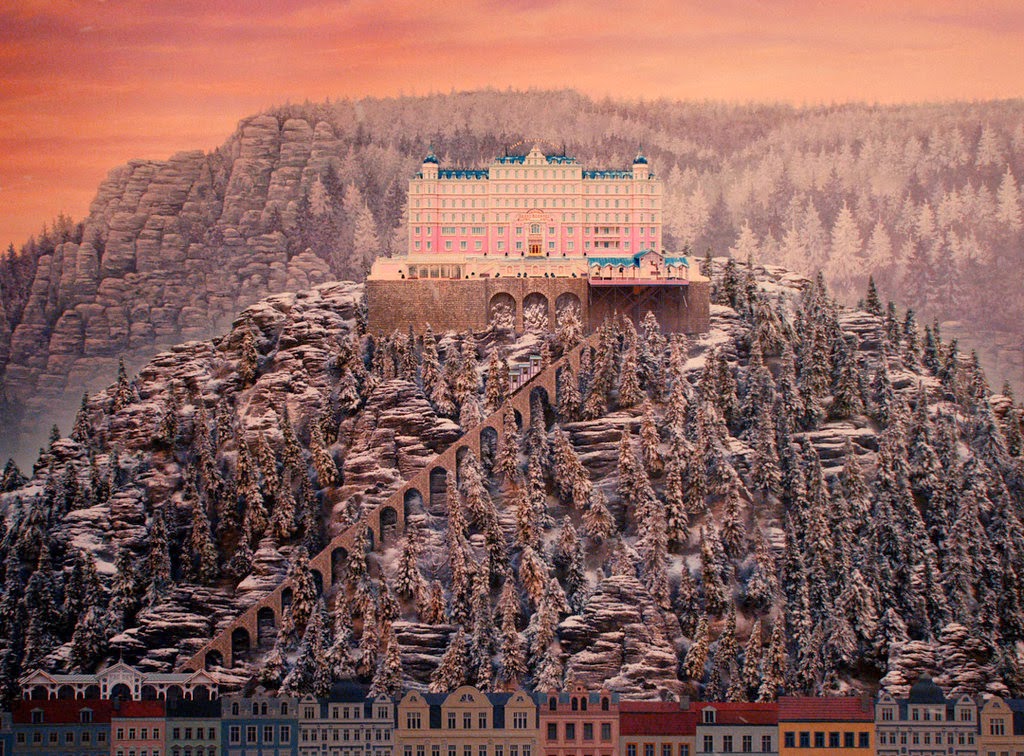 Where most films today have a digital, computer generated quality to them, Wes Anderson's films have an aged hand-crafted feel to them, as if they've been painted by hand, with model scenery and characters.


Wes Anderson makes truly creative pieces of art the likes of which we rarely see today.  I'm reminded of my film history classes in which I got to see films from long ago in which creative directors experimented with the medium of film and produced beautiful cinema despite their relative lack of technology.  Painted sets, and models, even at times integrating short animated sequences giving them the ability to create things we've never seen before (before there were computers to design these things). 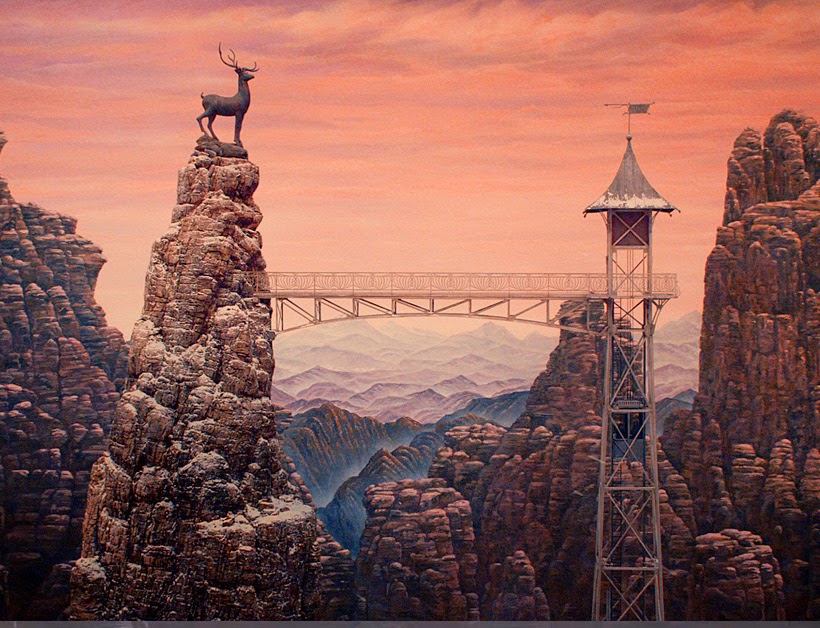 It is like watching a stage play on the big screen, an undeniable theatricality to it all.  The fictional locale looks as though it's been hand painted on big set pieces, much the way films were made in the silent age, or even into the 30's and 40's (note that the film also takes place around this time).  I still find a certain beauty to these antiquated film techniques, and appreciate when filmmakers are willing to create painterly scenes.

Anderson's meticulous design and composition is very much like something from films of a different age.  Watching his films remind me what the medium of film can be.  They aren't at a loss for creativity after spending so much time, money and resources on CG and action sequences.  So in a way Mr. Moustafa was not merely talking about Gustave when he also said toward the end of the film:


“To be frank, I think his world had vanished long before he ever entered it - but, I will say: he certainly sustained the illusion with a marvelous grace!”

Wes Anderson frequently talks about how filmmakers from the 60's influenced his filmmaking.  I think were he to live in their time, he'd have been among the group of the most influential filmmakers in the history of cinema, and among the leaders of the new wave (whom he clearly values so much).

The Grand Budapest Hotel is among his finest work.  Even the film's music (by Alexandre Desplat) is among the best original music of any of Anderson's films. I'm already anxiously anticipating the Criterion Collection release of the film.
Posted by Zach Owens
Email ThisBlogThis!Share to TwitterShare to FacebookShare to Pinterest