Godzilla will be in theaters May 16th, and Legendary has treated us to a new trailer.

The trailer reveals the presence of another monster that Godzilla must fight.  It seems as though humanity's only chance for survival against the winged monster is to let Godzilla fight it (whether for us or against us). 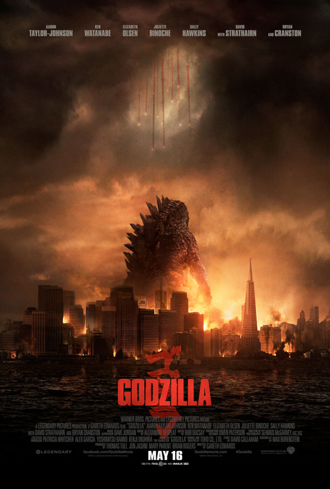 Right now speculation is that it's Muto Godzilla must fight against. According to the Godzilla wiki: "The Muto creatures are widely believed to have been genetically engineered by humans, particularity the mysterious M.U.T.O. faction, from ancient natural enemies of Godzilla."

Apparently there are winged and non-winged versions, so it's possible there are more monsters for Godzilla to fight than just the one seen in the trailer.

Also, leaked images of leaked toys suggest what the creatures will look like.

It's possible there will be any number of different monsters based on creatures from past Godzilla films.  It's possible that in addition to the Muto creatures, the winged creature could be Rodan, or Gyaos, or more likely just a new variation on this type of creature.

One way or another we don't have that much longer to wait till we can find out for ourselves.