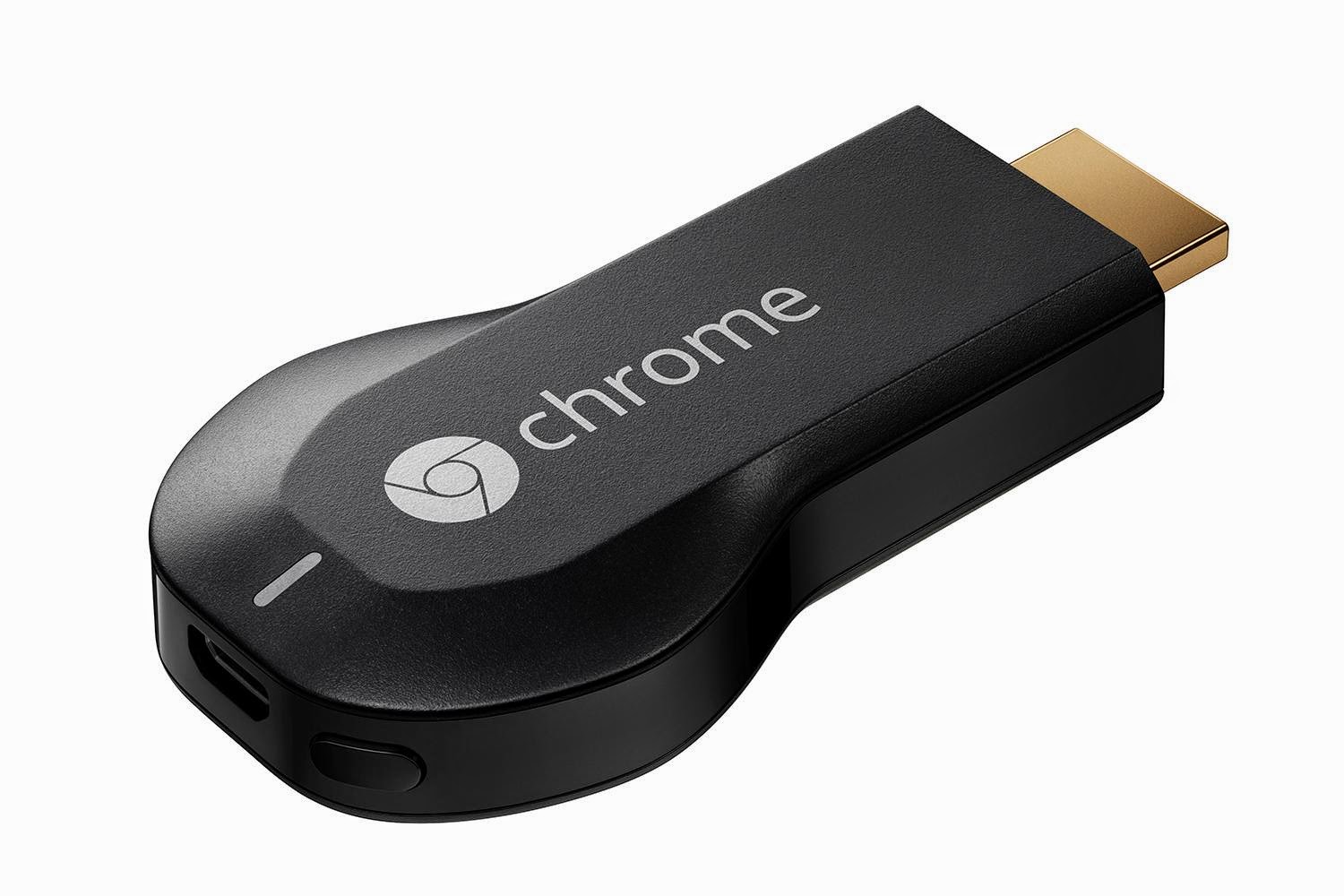 So Google released Chromecast upon us and it's taken over as my primary method of streaming content on my TV ever since.  It isn't as though I don't have other methods to achieve watching things like Netflix or YouTube on my TV (I could use my Xbox or simply plug my laptop into my TV with an HDMI cable), but for $35 it makes streaming fast and easy with less hassle than most other options.  There for a long time I was subscribed to Xbox Live mostly so I could have a convenient way of streaming Netflix on my TV (now that I play less and less online games), but being able to watch Netflix on my TV is not worth the cost of Xbox Live (especially when I'm already paying for Netflix).  Chromecast solves this problem (as does simply owning a PS3/4 instead of an Xbox, but that's a different discussion), because now I don't have to pay for Xbox Live to keep streaming Netflix.

But now that it's been out for nearly a year (ok a year in July in the U.S.) perhaps it's time to look at how things have gone while using Chromecast.

Back then:
Back when Google first released the Chromecast, it quickly sold out, and early reviews called it the cheapest (and perhaps easiest) way to stream content to your TV.  You get to use your phone or tablet as a remote control to find and control the content as well.  But... Google only had a select number of apps available: Netflix, YouTube were available of course, and Google Play Movies and Music were available to Android users.  You could also cast a tab from the Chrome Web Browser, which admittedly has limited functionality.  You'd think that would mean you could just open a video in chrome (either locally, or from some website that offers video streaming) and then you'd be able to watch stuff on TV that way, but sadly it doesn't work that well.  Too much latency causes laggy video and I've always gotten frustrated quickly attempting this.

Months later, they added support for Hulu Plus, and HBO GO, and honestly all of these apps were enough reason to justify the $35 spent on Chromecast, especially when the other options are things like Apple TV, Amazon's Fire TV that cost around $100.  I have used it just about everyday since buying it, and my most used apps are Netflix and YouTube, but as an All Access subscriber, I also like streaming music from Google Play Music on occasion.

Where you have your content matters. If you have lots of videos on Google Play, iTunes or Amazon Instant video (or if you're a Prime Subscriber) the device you buy/use will matter to you.  Owning the Chromecast has given me reason to expand my library of digital content from the Google Play store.  Owners of streaming devices from other companies will likely find their digital libraries grow, and as a result they will grow more tied to the company whose streaming device they've bought.

Castable Apps:
Google has ambitions that every app should be "castable," but so far that hasn't been the case.  Earlier this year, around six months after releasing Chromecast, Google released the SDK so app developers could integrate support into their apps on both Android and IOS.  We've seen a lot more apps become castable, and the number is sure to grow, but the question remains why wasn't the SDK available at launch or even before so the wealth of content was there from the beginning.

Google tends to advertise only the most polished apps that work with Chromecast, but here is a list of some of the more popular apps with Chromecast Support:


Of course you can always cast a tab from your Chrome browser as well. For a more complete list of which apps you can cast to your TV, Reddit has been putting together a pretty comprehensive list of apps on both Android and IOS with Chromecast support, check it out here.

Note you can also find a list of apps in the Google Play Store or the Apple App Store by searching for Chromecast.

Let me add a few apps I would like to see add Chromecast support: I mentioned that YouTube and Netflix are my most used apps on Chromecast, and part of that is because that's where I watch the most content online, but also because they seem to work the best, but they aren't perfect.

Occasionally (although it's fairly rare) my device seems to lose connection with the Chromecast after sending some videos. I can't tell if that's a problem with my network, the app or the Chromecast itself.  Usually I can just reconnect the app without losing my place in the video I'm streaming, so it's a minor gripe, but still something that shouldn't be happening.

Netflix's Chromecast support could use some work, and my complaint here goes for the Google Play Movies & TV app as well.  YouTube has the ability to queue up a playlist of videos that will run without stopping, and it's easy to play a video and multitask in order to add more videos to the queue and still be able to control the playback with play/pause/next and so forth.  Why doesn't Netflix and Google Play Movies & TV have a similar feature?  Maybe a person won't sit there and watch multiple movies in a row, but when I'm watching a TV show it's irritating to have to go back into the app and find the next episode and hit play when I want to watch multiple episodes.

Netflix has made TV binge viewing popular, even going as far as to offer their own created content (Arrested Development, House of Cards, Orange is the New Black...) a whole season at a time rather than one episode a week.  They are all about letting you watch multiple episodes in one sitting.  So how can it be that they've not updated their app to allow you to queue up multiple episodes, or at least a button somewhere to allow continuous play when you open a TV show?

Even Google has failed to implement a similar feature with Google Play Movies & TV.  It seems rather short sighted of them both.  It's such a basic feature that it is very surprising to me that almost a year later these apps have still not incorporated the functionality.  So far only YouTube has it figured out for the time being.

Google Play Music could also stand to see some improvements.  It would be nice to see something more than just a screensaver of the album art for the song that is currently playing.  More options there would be nice.  Even adding the upcoming track listing somewhere on screen would be a nice addition. 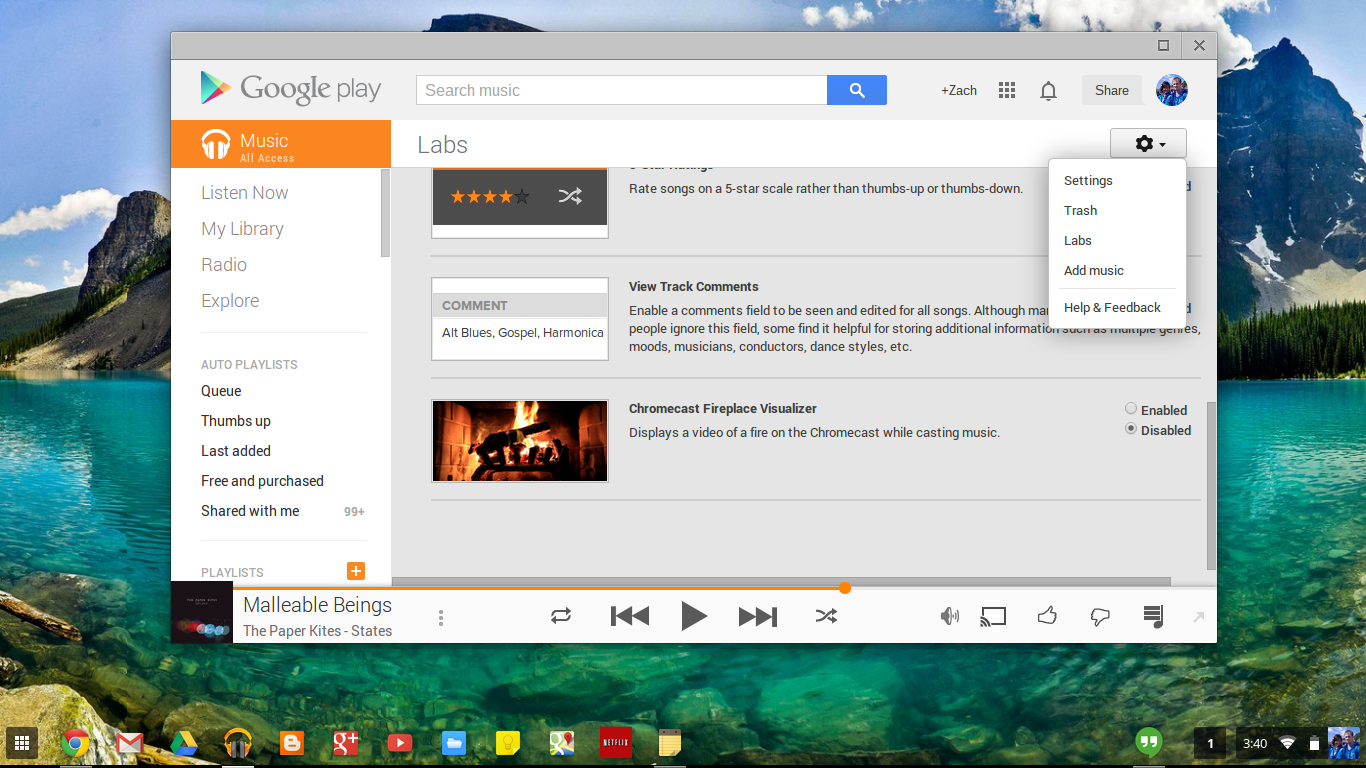 Right now you can go into Google Play Music labs in the browser version of the Google Play Music app (not from your phone or tablet) and enable a fireplace visualizer for all your Yule Log needs, but again, more options would be nice.

I'm not going to go through and review the experience on Chromecast with every app, but as of now, generally speaking, most apps could use little enhancements like this to improve the experience when casting.  Certainly, Chromecast is fairly young and we can expect improvements from the device itself and the apps that interact with it over time.

Casting a tab is still a lag fest. It is definitely not a good way to go about sending your internet browsing to your TV, but it is still listed as being in beta.  For now it does not really serve as a way to wirelessly send your computer to your TV, but I hope, with time, it'll get there.

Despite this, and the need for little enhancements, Chromecast remains a wonderfully useful little piece of tech at a very affordable price.

Comparison (in case you were wondering):
So how does it stack up?
Roku released a similar streaming stick that you can control with either an app or a remote control.  It cost around $50, whereas the set top box version cost around $100.

Amazon recently released the Fire TV set top box that has a remote and optional game controller, because it does games as well.  It's also around $100.

Apple also has Apple TV a similar steaming device that can be had for around $100.

CNET put together a comparison breakdown of the apps and services available across these different devices. 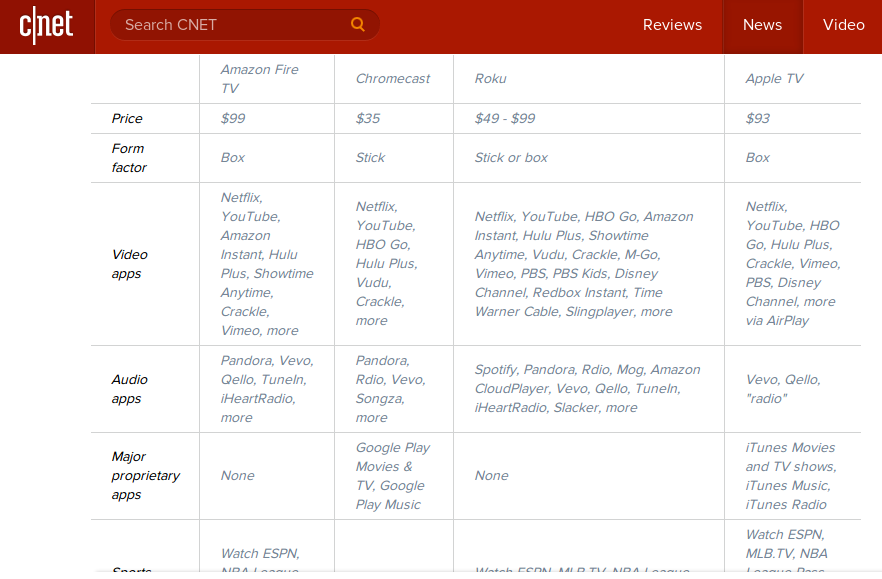 Competition can only help things get better.  When it comes to adding games support, they will need to release something more like a set top box.  Chromecast doesn't really have the memory, or ability, to download games directly to the stick itself.  It just streams the content you told it to find online.  So gaming on Chromecast is, for the most part, out.  That's where the rumored Android TV comes in.

It will likely be a competitor to Amazon's Fire TV and Apple TV.  But if you don't care about games, Chromecast can do almost everything you need it to as far as video and music streaming, and I would expect more good things to come.