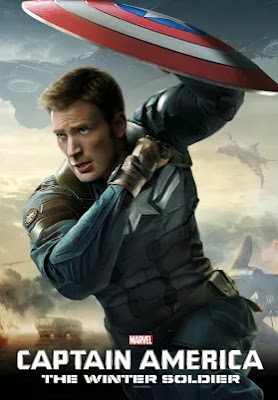 There is a lot to think about and a lot to discuss/debate after watching Captain America: The Winter Solder, so let me get this out of the way before discussing some of issues. This film is very entertaining, arguably the best of the Marvel franchise. I think it's right up there with The Avengers (2012). There's a more visceral feel to the intense action sequences here than last time around, and each of them are fairly varied. The Cap is adjusting to living in the future (our present) and a number of the early scenes are there to give us essential exposition without it feeling like it.

Captain America is the good-natured boy scout. He is the symbol of justice and moral uprightness. I was interested in thinking about a person such as this, a soldier from back when, being present to deal with current issues. Where would he stand on today's issues? And how would his approach to dealing with these issues differ from our own? For the most part, this film doesn't want to spend too much time dealing with the past mind-set vs today's mindset. Nevertheless things/people from the previous film (from years ago) play a major role in this film.

I'm not sure whether it's a spoiler to tell you who the Winter Soldier actually is, especially since a quick scan of the IMDB page for this film will spoil it anyway. The Cap's old friend Bucky has somehow survived all these years and been given a metallic arm (he's similar to Captain America except he can't throw his arm the way The Cap can throw his shield).

As these things tend to go, The Winter Soldier himself isn't actually the main bad guy, he's more of a henchman. Did I mention that Robert Redford is in this movie? Did anyone expect him to be a good guy? The trailer paints him as the bad guy, but also there is not a good chance that he'd be a new character introduced to the Marvel universe in this film if he weren't the villain. 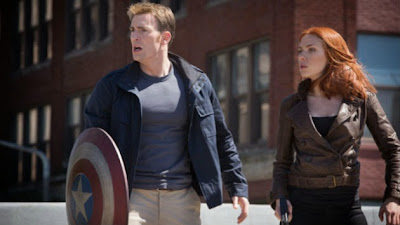 Things start getting bad at SHIELD, and Fury warns Cap not to trust anyone, which inevitably sets him at odds with SHIELD. He ends up on the run from SHIELD and working with Black Widow (Scarlett Johansson) and The Falcon (Anthony Mackie) to figure out how Hydra infiltrated SHIELD and how to stop them from deploying large warships that will seek and destroy anyone who could potentially oppose them in the future. It's a little bit like Minority Report, where they can target and kill people who would do evil, or oppose Hydra, before they do it.

Where Captain America: The Winter Soldier succeeds is that it isn't that much like the other Marvel Hero films. In pretty much all the others you know you're heading into it expecting to see some crazy bad guy who may or may not look funny and have super powers of some sort. You expect to see aliens shooting some blue cosmic lasers, and some sort of death ray that will destroy the world and everyone in it. Basically we expect the hero to stop some grandiose magical terror. This film, however, is being compared more to the Bourne films, and rightly so. It's classic spy film territory.

It's a thriller whose issues mirror the ones we see in the news. A government/military organization, politicians get angry when Romanoff follows Snowden's lead, releasing all their dirty little secrets online. And the morally grey area where Hydra has a "kill list," much like Obama's kill list.

Yet where I think the film succeeds is ultimately a subject of controversy. Perhaps it wasn't necessarily handled as well as it could have been. The Washington Post posted an interesting article discussing the irony in the film that SHIELD and politicians wanted to kill from a kill list, but Rogers, Fury, and Romanoff don't see that as right, so they kill all the people on the list of known Hydra agents. Afterall, Fury doesn't capture and interrogate Pierce, he shoots him twice in the chest. Maybe he had no choice, maybe he did, arguments can be made for either side. Instead of it being about right and wrong, it's a matter of who you can trust. SHIELD thought they trusted Pierce and the other people working for SHIELD, until they realized they were Hydra. The audience trusts Rogers, Romanoff and Fury, despite the fact that it was Fury who failed to recognize the flaw in what SHIELD/Hydra was doing until it was almost too late.

The gray area being, who exactly knew and agreed to what within SHIELD?  Because as Alyssa Rosenberg's post discusses:


"(SHIELD wants to blame all) of its terrible decisions on Hydra, rather than on its own internal culture or paranoid approach to security...... “Captain America: The Winter Soldier” returns time and time again to the idea that the biggest issue in national security is who controls the apparatus, rather than whether we should use certain technologies or techniques at all. ”What if Pakistan marched into Mumbai, and you knew they were going to drag your daughters into a soccer stadium and shoot them, and you could just stop it. With the flip of a switch. Wouldn’t you?” Pierce asks a member of the World Security Council who is horrified at the uses to which Pierce intends to put Project Insight. “Not if it was your switch,” the man tells him."

But I will say that the Captain does immediately disagree with the warships upon first being told about them, he says, "This isn't freedom, this is fear."

And perhaps there is a problem when at the end Romanoff proudly smiles as she says something to the extent of, yes we shared your secrets, yes we killed all the people we deemed evil to keep them from killing people they deemed evil, including likely some on the gunships who were not necessarily evil, but you won't do anything about it because you need us to protect you. As a result we can get away with anything. Then she gets up and walks out, and they do nothing.

Granted, as Commissioner Gordon tells us in that other comic book franchise:


"There's a point far out there, when the structures fail you. When the rules aren't weapons anymore, they're shackles, letting the bad guy get ahead... Maybe one day, you may face such a moment of crisis. And in that moment, I hope you have a friend like I did... To plunge their hands into the filth, so that you can keep yours clean!"

On another note entirely, I had a problem with Nick Fury's miniature light saber thing. The big car chase sequence involving Fury in a self driving SUV was a pretty cool sequence until it ended with him being trapped in the overturned vehicle. It struck me as the writers having written themselves into a corner and pulling out a device we've never seen before that sort of looks and seems to act like a small light saber, with which he is able to cut through what would likely have been 20 feet of pavement and dirt in order to escape to what we can only imagine is the subway system below. He's cutting pavement and dirt? The first few feet.... where does it go? And why not use this incredibly powerful tool against your enemies? It amounts to a deus ex machina, as we haven't seen it ever before, and we don't really see it again, until Agent Maria Hill (Cobie Smulders) ends up in a similar situation and needs a get out of jail free card too.

Also, what do these events mean for SHIELD and the Agents of SHILED TV show? Also, I've said this about every other Marvel film since the Avengers, where are the rest of the Avengers? If SHIELD is having issues such as this, I find it surprising that the others wouldn't have taken notice, or checked in at some point.

Also, with Chris Evans' contract about to be up and Sebastian Stan (Bucky/Winter Soldier) signed on for quite a few more films, is it possible that he'll take over for Evans/Rogers as Captain America the way it happens in the comics? The Russo's even give us a shot where he fights Cap's shield away from him, and holds it, as if foreshadowing. Though they do bring back Rogers later in the comics, is it possible, or would you be ok with The Winter Soldier turning into Captain America? And if he does will we then see a film titled The Winter Solder: Captain America? (see what I did there?)

These are the many things up for discussion and debate, as I see it, after having seen this film. However, even despite these things, this is one of the better super hero films out there.