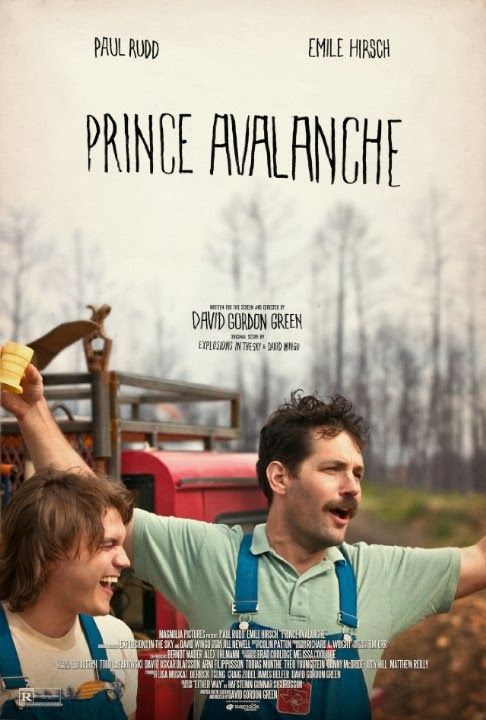 Prince Avalanche is one of the sleeper hits of 2013, this indie film is a tad on the slow side, slightly moody, very contemplative, at times funny, at times sad, but also entertaining throughout.

It's a buddy drama/comedy about two men bonding while cleaning up after wildfires that scorched parts of Texas. There is certainly more going on in this film and with these characters than what's on the surface, and it's clearly up for interpretation. It's the kind of film you can discuss without anyone necessarily being wrong.

It's three main characters (technically two with one recurring side character) are essentially the same sort of man at different stages in life. Lance (Emile Hirsch) is the young man still learning to make his own way in life, and dealing with love and loss, but very much a person who needs to be needed and wants to be around other young people. Alvin (Paul Rudd) is the middle aged father figure to Lance, who is confident and has a sense of pride and duty in his work as a means of providing for his loved one. He is a loner who enjoys the serenity and quiet of the woods. The Truck Driver (Lance LeGault) is an aging man who has no life outside of his work, but he is clearly a man filled with regret. 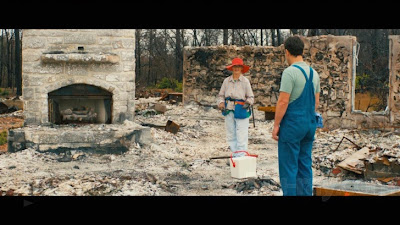 The best and most touching scene is where Alvin happens upon an elderly lady (Joyce Payne) whose home was destroyed in the wildfire. He spends time with her trying to go through what's left of her home. Matt Zoller Seitz, perhaps, said it best in describing the scene:


"Payne is a real-life fire survivor, and that was actually her house. Green and the crew met her during filmmaking and thought it would be nice to work her into the movie. "This is your house," Alvin says. "Was," she corrects him. "Everything's past tense now." She tells him she used to be a pilot, and wonders how "anybody's gonna prove that I had all these experiences, and flying." She tells him he's looking for her pilot's license. "Do you think it burned up?" Alvin says. "I guess so," she replies.

Alvin goes into an adjacent ruin and walks around. He pretends it's a functioning house with people in it, and that perhaps his wife is there and is glad to see him. It's an impressive bit of Chaplin-eseque pantomime by Rudd, who's a revelation in this film, but there's more going on here than a bravura display. Something deep is roiling within this man, something he can't let out. We live in our illusions. We don't want to leave them." 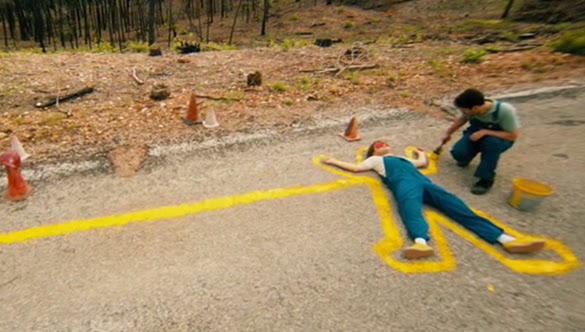 How true. It is a powerful scene. Alvin is a man who refuses to leave the woods on weekends when Lance is so desperate to return to civilization. Maybe Alvin was helping Lance learn responsibility, but Lance helps Alvin return to life.

We grow to know and enjoy these characters, however flawed they may be. Also worth noting, the beautiful images are accompanied by a great soundtrack by Explosions in the Sky. Although it's not the easiest film, It is definitely worth the watch.
Posted by Zach Owens
Email ThisBlogThis!Share to TwitterShare to FacebookShare to Pinterest
Labels: 2013, 3, buddy story, indie, touching