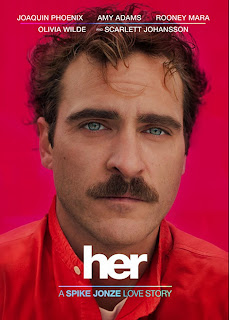 I enjoyed Spike Jonze's previous film Where the Wild Things Are, but Her is a film very far from that old child's story book. It's almost a prediction of the future. Her is a film about what love is, and what makes us human. It challenges our notion of humanity, and what is acceptable as love.

Joaquin Phoenix is fantastic as Theodore playing opposite a disembodied voice. Theodore is going through a divorce. He is lonely, and possibly on the verge of depression. He works as a writer of sincere, or even romantic letters for people who can't, or won't, write their own letters.

We see him (and everyone) using their phones with earpieces all the time. It's not too much of a stretch from what you'll see today as you ride on the bus, or the subway, or while walking around the mall. We all tend to look like zombies in our own world, staring down into our phones. We're also getting to the point where we have very useful voice commands for our devices, making talking to our phones not such a strange thing. The future presented here is not too far from our current reality. Theodore sees an ad for the latest operating system OS1. This time it isn't just voice commands, it's an artificial intelligence. 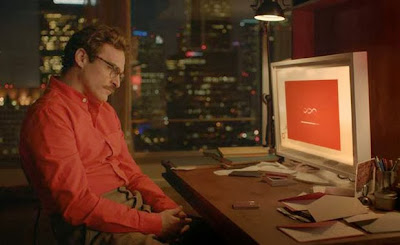 His version of the OS is named Samantha (Scarlett Johansson), and he finds himself oddly at ease with her right away. It makes sense, if you have trouble connecting with people, or feel you can't share things with certain people, you might feel more comfortable with someone or something you know isn't quite real, and won't judge you. Sometimes things are just easier to say to a stranger.

That's the way things start out for Theodore and Samantha. The more they talk, the more she organizes his schedule and emails, the more she gets to know him. All his personal information allows her to know him better than anyone else could. Inevitably, like any other A.I. we've seen in TV and movies before, Samantha desires to become more human. She isn't just an intelligent computer you can have conversations with, she can actually feel.

She has her own thoughts and feelings about things. She also has the ability to create things on her own. She writes her own music and plays it occasionally for Theodore. She gets jealous when Theodore goes out with other girls. She calls him to check in on him, and to deliver the latest group of emails. All things considered she is a real person, but without a physical body. 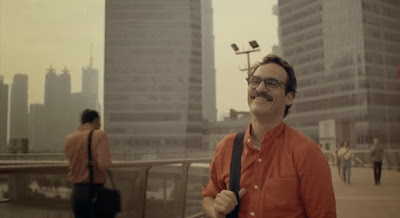 Theodore finally has someone. Not just someone to help him move on from his ex-wife, but someone he really cares about and who cares about him. However, as you might expect it isn't easy to explain it to other people. Anyone would look at you funny if you said you were dating your operating system. He struggles with this idea as much as anyone would.

What Theodore and Samantha have is the equivalent of a long distance relationship. They talk on the phone, and look out for one another. They help each other grow as people. So the question that we, and Theodore, struggle with is, is this a real relationship? 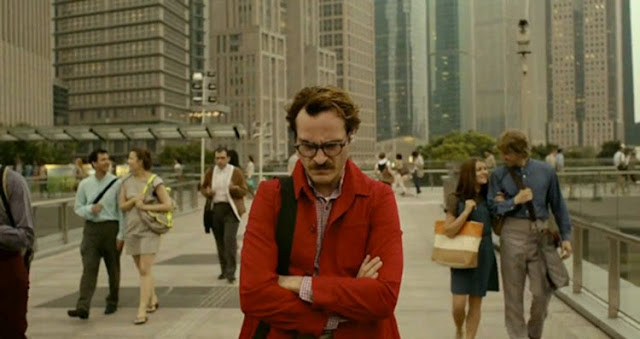 It's a fascinating world that Jonze creates. It's a future where everyone is in their own world talking, but to no one. Almost completely unaware of the world around them. There is a shot toward the beginning of the film where Theodore is walking at the bottom of the frame and we see the large city of skyscrapers all around him. It would be very interesting to anyone who likes architecture, but Theodore doesn't look up from his phone once. It may be set in the future, but it reflects the present more than we'd like to admit. The obvious irony being, that the more "always connected" we become, the more disconnected with everything around us we really are.

Theodore's job is to write lovely letters for people to give to their significant others as if they wrote it, even though they obviously didn't. His work is an example of further disconnection. It isn't as though Theodore can't connect at all, he has friends that he spends time with, but he is going through a tough time with the divorce. It may not even be a good time for him to connect, and yet he finds an unlikely connection. Samantha inspires him, just as he inspires her. Theodore tells his friends and ex-wife about her and tells them that it's refreshing to be with someone who is so excited about the world and everything in it. Much like real relationships, meeting someone new, reignites his interest in life in general. But as you might expect, for a guy who hasn't been successful in his human relationships lately, the more human Samantha becomes, the more rocky the relationship becomes. 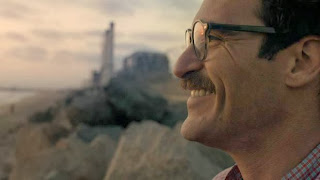 Jonze also, believably, presents the world as if old styles have come back. Styles tend to come and go, then come back around again years later. Shirts that were popular in the 70's became popular again for a while, and in this film Jonze's vision of the future sees glasses, and clothing styles of the late 80's-early 90's come back. Including, however unlikely, people wearing their pants up around their belly button. It's an interesting modern, yet retro look. This along with the plausible architecture and technology, we can believe, in another 10 years or so, the world might look like this.

The start of the relationship is also entertaining, but once Samantha starts displaying more human tendencies the film turns into a more conventional romantic drama/comedy film. That isn't to say it's a bad thing. It's special to be able to take an interesting and timely concept such as this and apply it so successfully to familiar film conventions.

My one complaint about this film, is also a word of warning. I went into this film with an open mind (as you should) and was still a little weirded out by the phone-sex style sex scenes Theodore has with Samantha that lasted a bit longer than necessary. Otherwise this is a strong, thought provoking look into a possible future. A film that, despite any reservations we might have, is still one of the better films of 2013.
Posted by Zach Owens
Email ThisBlogThis!Share to TwitterShare to FacebookShare to Pinterest
Labels: 2013, 3, romance, thought provoking