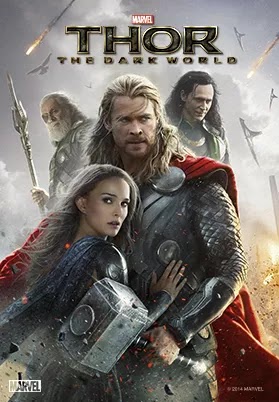 Some spoilers possibly ahead...

Thor: The Dark World begins almost where The Avengers left off. Loki has been arrested and is placed in the Asgardian equivalent of jail for crimes committed during last years The Avengers.

We see the guardians of Asgard, and/or other realms doing battle against unknown evil forces. There is an opportunity for a cool fight scene with Thor and a giant evil "humanoid-rock thing" that ends before it begins in an attempt to add some humor, or simply to illustrate how much more powerful Thor is than even the scariest looking enemies that space has to throw at him.

The film goes from scene to scene in which we see what would be very interesting characters from different realms and the start of subplots only to refocus our attention back on earth and the primary characters. It almost tries to follow too much and as a result feels like it's lacking focus. 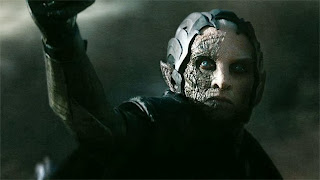 Malekith, a dark elf and the bad guy (are there light elves? because if not we can just call them elves), has an evil scheme involving something called Aether, which is some sort of indecipherable, all powerful, space magic that somehow he intends to harness and bring "darkness" to the nine realms, whatever that means. We don't know exactly what Aether is, just that it's indestructible and somehow or another the villain can wield it, yet it doesn't seem to make him any more powerful than Thor and his hammer.


My problem with most of the Marvel films is that they are "out there" in a way that someone unfamiliar with the source material is unlikely to grasp, if indeed those familiar can grasp. What really is meant by spreading darkness to the nine realms? I can't really say, we just know we are supposed to fear "darkness" and hope the heroes keep it from happening. That's all this film really comes down to. It's the heroes against "darkness" and poorly established villains. Needless to say, there's a problem when we don't understand the stakes.


In other superhero films (cough...Batman...cough) we generally get to know the bad guys a bit better, even if their motivations are using chaos to upset the established order, we understand who they are and what they want. Those films were made more accessible for those that aren't up on the latest graphic novels, and yet they stand up as strong entries to the franchise for long-time fans as well. It's a shame the Thor films can't strike a better balance.

I'm not sure what fans of the graphic novels think, but I can't seem to wrap my head around Thor and what goes on in his universe. I understand it on a basic level I suppose, and I can enjoy the characters in these films, but I'm not sure I understand what is happening around them. I say that not to say this film is hard to follow due to interesting twists, turns, and logic that keeps you thinking, but because I'm just not sure it makes sense.

Let me see if I can break this down a bit (I'm hoping for someone to help set me straight), and stop me if I start making sense. There is an element to this story called "convergence" in which all nine realms line up and as a result, in random areas around the world there are invisible portals one can pass through to another of the nine realms. Malekith intends to use this to more easily spread his "darkness" once he has taken the Aether.

Asgard gets attacked, by an indestructible ship that crash lands its way through about a hundred, large concrete columns that seem to support nothing since the whole castle doesn't come down. Because of the attack, Odin has ordered the realm to go into lockdown, no one can come or go, despite needing to stop the evil madman before he returns to attack again. Thor recruits his not-brother Loki to help him fly away using the indestructible ship (that for some reason they fear being blown up by lasers despite its indestructible nature). They attempt to destroy the indestructible Aether and Malekith but fail.

(SPOILERS) -
Loki is killed, but he isn't. If you remember he has inherited the bugs bunny power of illusion, in which he is there until harm befalls him and then he is somewhere else. He is also able to project these illusions onto others in order to fool those around him (for instance making it appear as though he has cut off Thor's hand, when in reality he hasn't). Apart of the graphic novels or not it seems a bit of a dangerous game to play around with. Where do these illusions end? What have we seen that's actually real? It's an all too convenient plot device. Furthermore, we are left to assume he inherited this power from his mother, who also has the power, but she is not really his mother. So how did he get it? Unless she taught it to him, in which case why hasn't she taught more people, Thor for instance could possibly benefit from such a unique gift.

Loki, at one point, fools Thor into believing that he is his father (through his illusion power), but what happened to Odin? and will Loki appear as Odin and in that way become King the way he always wanted? Obviously, these are likely questions for the next Thor film.

Meanwhile back on earth, Scientist Jane Foster (Natalie Portman) and Erik Selvig (Stellen Skarsgard) devise a way to create portals wherever they want with three magic poles of some sort. Perhaps the other nine realms should be concerned that earthlings have figured out how to manipulate these otherworldly forces, but they already have their hands full. How all this space magic works, I'm not sure we are supposed to question, but it does, and they use these "portals" to help divert the mess created by the clash of Thor and Malekith (now with Aether power) to different realms.

As the film goes along more and more strange things that, again, we can only refer to as "space magic" happen, to the point where it shouldn't surprise us if anything happens. If one of the characters were to cartoonishly pull out a magic wand from behind his back with which he can cast a "win without effort spell," then I'm sure we wouldn't have any more trouble accepting it than what actually happens in the film. 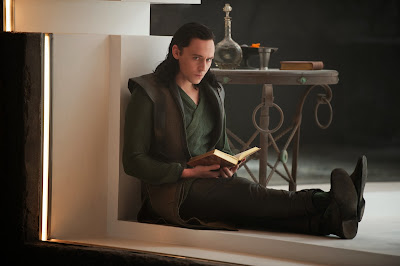 It's becoming an all too common complaint with these big budget action/hero films, that it all gets to be a bit too much, where a greater focus on maybe a little less could have helped.

I should say that Loki is by far the most interesting character in this film. He plays a fine line between feeling like a good guy and the villain, and that ends up making him more interesting than either Thor (the main hero) or Malekith (the main villain).

As someone who did not like the first Thor film, I should also say I found this one more enjoyable, but it doesn't seem interested in answering any questions you may have either. Asgard, and all the realms seem to lend Thor and his series of films a larger grander scheme than the puny problems of earth and perhaps the other Avengers when you think about it, but then again the problems of Asgard tend to be constantly redirected toward earth. That begs the question I posed in my Iron Man 3 post. Where is S.H.I.E.L.D. and the other Avengers? I can't help but wonder how a force of evil that comes to earth to threaten not just global destruction but "darkness" on a universal level does not warrant the attention of S.H.I.E.L.D. and the other Avengers. Especially considering the similar problems faced so recently in the Avengers film. The fact that there is essentially no mention of them is a bit baffling. I know each of the Avengers need to be able to have their own films going forward, but after seeing them together it's hard to see them on their own, and these types of questions will continue to leave a haze on the rest of the individual Avenger's films.
Posted by Zach Owens
Email ThisBlogThis!Share to TwitterShare to FacebookShare to Pinterest
Labels: 2, 2013, action, sci-fi, superhero